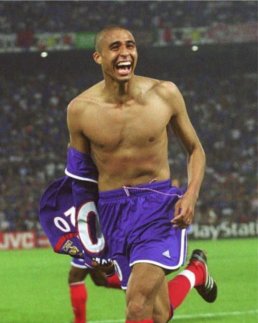 "Domenech is staying and I am quitting the national side,"

Trezeguet said at Juve’s pre-season training camp in Pinzolo. “The awful European Championship and then the decision to stick with the Coach has forced me to this decision. I see football differently to how they see it in France. Euro 2008 was very negative, but it was the faith in Domenech that really annoyed me. Decisions seemed to be made politically rather than for footballing reasons and the public opinion in my favour wasn’t respected.”

As an Azzurri tifoso, I am thankful that our archrivals have been robbed of one of their best talents through their own stupidity. A player with a roughly 1:2 goal:game ratio for both club and country and 20 goals in the current season was ignored for the likes of Gomis and the most overrated player in the world, Anelka.

As a huge fan of David Trezeguet, I cannot help but feel sorry for him. It is a premature ending to his international career that never earned enough respect, by Domenech or the other French coaches. It is a huge shame for a supporter of football, but this means Trezeguet has dumped his blue jersey solely for the black-and-white.