As Gianfranco noted in his excellent post about Arrigo Sacchi, during the campionato with all the fixtures it is sometimes hard to write about topics unrelated to the season. I've never been a fan of the transfer period, 95% of news is bullshit (possibly more) and I'm more interested in preseason friendlies to see how the new team will gel. It's nice to dream about all the players coming to Juve, but most do not happen. During the Moggi era, we moved swiftly and quietly, so the rumor mill wouldn't even have time to start. Sadly now, it seems with dunce-in-chief Secco at the helm that any real transfer will be drawn-out and overpriced.

As such, this is profiling a Juventus legend, Antonio Conte.

We have such legends playing for us now that sometimes we forget some of the older ones. The irony is not lost on me that when I was growing up and started following La Vecchia Signora in the late 90s we had the best midfield in the world, and now are struggling to fill it. There was Zinedine Zidane, Edgar Davids, my personal favorite Tacchinardi, Di Livio, Deschamps, and of course Antonio Conte. These were the legendary midfielders who led us to 3 consecutive Champion's League finals in one of our glory eras. It seems that Del Piero has been "il Capitano" for us forever, but he was not our captain during this glory era, taking over in 2001 after recovering from his knee injury. That honor went to Antonio Conte. 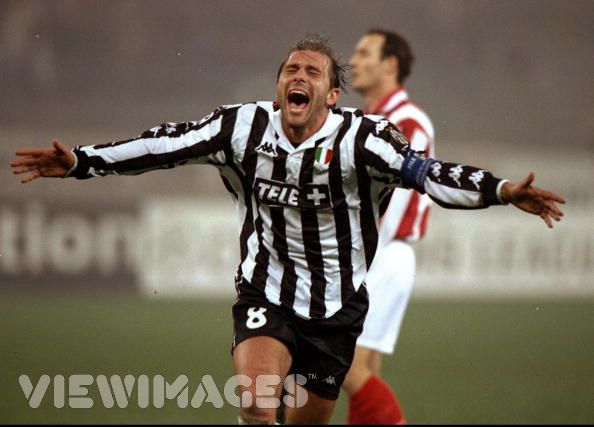 Antonio Conte is like me, Pugliese. He grew up playing for his hometown club, US Lecce, making his Serie A debut at age 16 in 1985, going on to make 89 appearances for the club. His talent was obvious, and Juventus snapped him up at age 22. Conte slowly grew into the team under the coaching of Trappatoni, but it was under Lippi that he really grew into a world-class midfielder. Conte was generally a central midfielder, helping to direct play around the midfield. What I remember most about Conte was what we all love about Juventus: His tenacity and work ethic was up there along with Pavel Nedved, he was the engine in our midfield. He never stopped running for Juventus, never stopped fighting, and came up with some absolutely crucial goals when the chips were down.

Conte was not particularly an attacking midfielder, though he did enjoy to go forward and he scored in numerous important occasions, the ultimate big game player. Who can forget his right-footed strike against Milan in the 90th minute after slipping past the great Maldini to draw 2-2 at the San Siro, coincidentally in the same game Trezegol scored his first-ever Serie A goal? Or his goal against Manchester United in the Champion's League?

During the mid-90s and the Ancelotti era, Conte was our midfield man. He was "il Capitano" della Juventus after Vialli and until 2001 when he handed it over to current capitano, Alessandro Del Piero, though he stayed with the club until 2004. He travelled with the Azzurri to the USA '94 tournament, seeing little playing time. Despite roaring back into form after an injury plagued season, Cesare Maldini chose not to bring him to France in 1998. Conte finally got his chance with the Azzurri, starting at Euro2000. I remember standing and screaming as il Capitano, Conte, opened Italy's scoring account at the tournament. Sadly, Conte was injured in the quarterfinals, stretchered off with an ankle injury after a terrible tackle and that was the end of his tenure with the Nazionale.

After retiring as a player, Conte took a break from calcio before starting a career as a coach. He was an assistant coach at AC Siena for a year, then coached at Arrezzo. AS Bari coach Giuseppe Materazzi (yes, the Matrix's father) quit AS Bari after losing the Pugliese derby in December 2007 4-0 to Conte's former club, Lecce, the Bari board hired Conte as their coach. He did well in his coaching of the team, leading them to a comfortable 11th place after a disastrous 1st half of the season under Materazzi, including a notable win the Pugliese derby against archrivals and promotion-chasers US Lecce. Bari is being tipped as one of the favorites for promotion next year, and as a Bari and Conte fan, I'd love to see them return to Serie A.

And who can forget Conte's joy on May 5th, 2002 when Juventus pipped Inter to the title on the last day. "No time to talk, we are enjoying it."

Conte is without a doubt one of the greatest Juventini to step on the pitch. Among his trophies- 5 scudetti, 1 Champion's League (3 runners up mdeals), a Uefa cup, an Intertoto Cup, an International Cup (now Fifa Club World Cup), a Coppa Italia, and numerous Supercoppas.

More important than the silverware is how much of a model Juventino he was. Juventus is often criticized for its weak connection to Turin, it's true. Juventus is the squadra of all of Italia, and Conte is no different. Like most Juventus legends, he did not grow up in the Juventus youth team, rather he joined at a young age. These legends often arrive at a young age and finish out the majority of their career at Juventus, sometimes finishing their last season at another club. Conte played for two clubs; his hometown Lecce, and then his adopted club, Juventus. His passion for Juventus is rarely equaled, his work ethic on the pitch showed his love for the team. One of the greatest Juventus captains, no doubt. My dream is for him to lead Bari and one day return to Juve, whether as a coach or some kind of technical director.

It's hard to find Youtube comp's for players from "old times" so this is a fairly poor comp, but for those who did not watch the Conte era, still worth watching. Grazie per tutti, Antonio.