Boom! Get ready for some of the most explosive football this world has ever seen! Bianconeri beware of the intense heat and energy transmitted through your screens as Inter stands to set the tone for your favorite team's upcoming campaigns. Sorry, my sarcasm never seems to come across too well. But truthfully, the only thing 'explosive' here is the latest diarrhoea to come from Intermerda's head coach. Apparently, Mourinho takes this tournament way too fucking seriously. So seriously in fact, he feels Juve should win for some "belief in light of their forthcoming CL preliminaries". Someone tell this joke he can keep his 45 minute scrimmages. 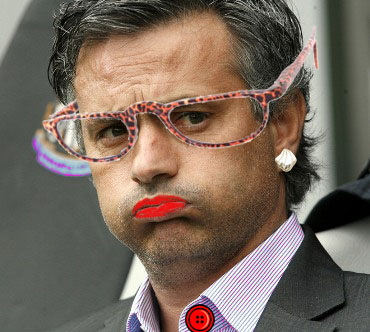 With stupidity like that I can only pray no one gets hurt. Does anyone out there agree with me that this 'tournament' is merely about promoting one telecommunications giant, and has even less to do with Italian football than Mourinho's cheap tricks?

Back to football. Ranieri likes Rossi and so do I. This kid is one reason why Palladino was sent to Genoa on a co-ownership deal. He's amazingly good for his age. The kind of talent that makes you want to commit suicide from knowing you already been pissed away your life at 24. In any case, Ranieri called him up again so let's hope the boy gets a couple bounces his way out there. How about Poulsen? Nice pass, but I still want to see more. Let's see what happens when Gattuso's thrown into the mix. Amauri and Iaquinta? Boy they're making some pretty good arguments for themselves. Ekdal I very much like. Knezevic I do like. Marchionni needs to lose 15 pounds. Finally, Salihams and Nedved are still machines.

I'll be keeping my eye on our back-line. Lord knows someone will have to.