About two weeks ago I did a profile on former Juventus captain Antonio Conte and with Juve's mercato pretty much wrapped up, I figured to do another. This is on a personal favorite of mine, in fact, my namesake on the Offside. Many of you know my real name is Aaron. Where does Alessio come from? Not Del Piero, although I love and respect that man, but Alessio Tacchinardi, a longtime Juventus midfielder.

There are many similarities between Conte and Tacchinardi, but unlike Conte, he is from northern Italy, from Lombardy. Born and raised about an hour southeast of Milan, he first played in the Atalanta youth team (Bergamo is very close to Milan), making his senior debut in 1992 having just turned 17. Like Conte and many of Juve's legends, Tacchinardi was snapped up by Juventus at a young age, only two years later in 1994. He was on-contract with Juventus for 13 seasons, although the last two were spent on loan at Villarreal. 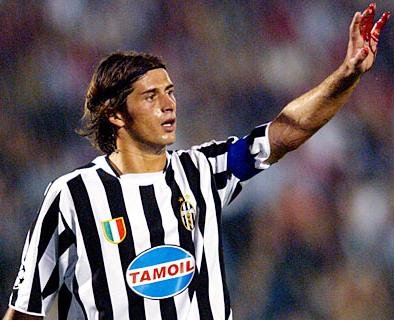 Conte was like Salihamidzic of 10 years ago, a utility player. Except a far better one. Just as Brazzo won my affection, Tacchinardi gave every moment his all, no matter what position he played. He was primarily a defensive midfielder, but he played central midfield, right-midfield, and even in defense sometimes as a fullback or a center back. His versatility was invaluable to his success and Juve's, during a time when our midfield was the greatest in the world. His tackles were uncompromising, his shots were fierce. He may not have the greatest vision or technique, but he battled it out, making up for it in his work-rate and endurance. (Have you ever seen a man run so much? Well, maybe Pavel) He didn't score all that often, but whenever he did they were usually terrific volleys or long range blasts. 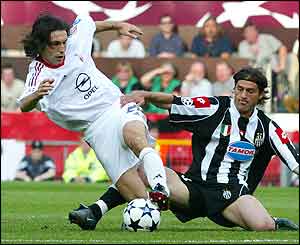 Like Conte, Tacchinardi did not have great luck with the Azzurri. In all honesty, Tacchinardi was never a world-class player, he was often overshadowed by the likes of Conte, Davids, and Zidane. He was a starter for most, but not all of his years at Juve, and he was switched in position often depending on the rest of the squad. He was called up for 13 appearances for the Nazionale, never for a major tournament.

I grew up watching Tacchinardi, and the 2003 Champion's League final, however disappointing, remains firmly in my memory. That season began scarily, after pipping Inter to the Scudetto we had a very slow start to Serie A. We cruised through the first group stage of the Champion's League (I don't remember who was in the group other than Newcastle, how the hell did they get in there) but struggled badly in the second group stage, getting whomped by ManUtd and barely squeaking through against a Swiss team, and Deportivo. (who would knock us out of the CL the next year) Tacchinardi played in almost all the matches up to and including the final, playing all 120 minutes. 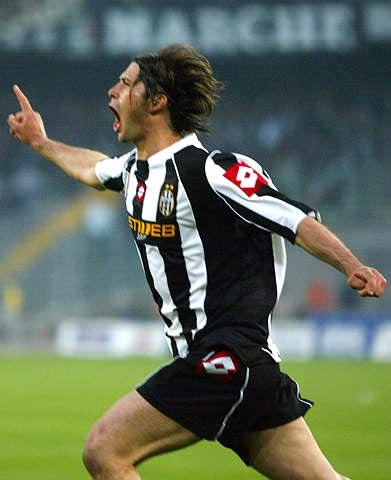 Alessio had had some minor injuries frustrating him throughout the years, but he really struggled in Lippi's last season and was never really favored by Capello. It was very obvious that Capello, a Juventus legend himself (who I nonetheless despise) did not think highly of Alessio and after one season with him (where he never started and only played 8 games), he was shipped out to Villarreal on loan for two years, only at the age of 30. Last summer, Juventus let his contract expire.

Very much like Alessandro Birindelli, I was furious with the way Juventus treated him towards the end. Here is a man who had given everything to the club, despite not being a starter in the beginning or latter years. In his last 5 years at Juventus, Tacchinardi never started more than 20-25 games a season. Here is a man who was our vice-captain for years, who could have walked onto the starting XI of almost any team across the world and we dropped him, without a sendoff or a goodbye. Tacchinardi gave everything to the Juve cause, but we tifosi never got the chance to give him a proper thank-you.

A vid of Tacchinardi busting a move with ADP:

Why did I love Tacchinardi so much? I grew up watching this man forfeit playing time to fight for the Bianconeri cause. Alessio gave it all when he was on the pitch, no matter what position we needed him to play he would adapt. In recognition of his dedication, he was vice-captain of Juventus for several years. He voluntarily gave up his shirt number twice in his career to an incoming transfer. He currently plies his trade at age 32 with Brescia in Serie B, a sad finish for a man who won 5 scudetti, 1 Champion's League (3-runners up medals), 4 Italian Supercups, and an Intercontinental Cup. Not only was he a dedicated player, he was also a great man. Lippi once remarked that Tacchinardi was the funniest and most outgoing player on the squad, and it showed. I hope he loved the time he spent in Turin, because I loved every minute of it.

Mediocre YouTube comp, standard for older players though. Doesn't show enough of his tackles but it does show some of his occasional inspired passes. (Check goal #3)

Video of some of his blasts:

Grazie per tutti, Alessio. All the best in Serie B, and know that we Juventini will never forget you.