It's Official: Christian Poulsen is Black-and-White

Share All sharing options for: It's Official: Christian Poulsen is Black-and-White

Yes it sucks, but I'm not going to college for graphic design, so nyaaaaaah. 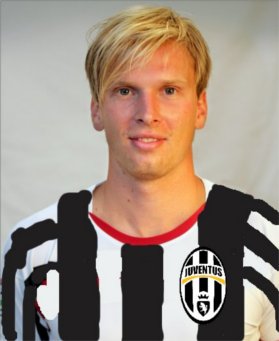 Christian Poulsen arrived at Juve's headquarters this afternoon to officially sign his contract, ending a few weeks of speculation.

While my feelings on him are mixed, I'm glad Secco was able to negotiate fairly quickly. The rumors sprung up about a week and a half ago and somehow they are done. We paid the 9.75million euro release clause in his contract, and he signed a 4-year deal, earning 3million euros a year. That is one of the thing that bothers me, his salary. Only Buffon, Trezeguet, Nedved, Amauri, and Del Piero earn more. That's right, he'll be making more than Chiellini or CAMORANESI. Bullshit.

Poulsen is well known in the Boot, mostly for not-very-kind things, although I don't know how Roma fans can be pissed at him. He instigated Totti, sure, but as much as I love Zizou he was very much in the wrong. If you didn't know, at Euro2004 after some shittalk, Francesco majorly lost it and spat right on him, earning himself a 3-match ban. Not to goad the Romanistas any more than necessary, but you've never seen Alex lose it like that. The closest I've seen was this, back in Serie B, when a Pescara player took the dive of the century. Love Alex's reaction to the ref.

But I digress! Poulsen did his reputation in Italy no help when he fiercely, some say violently, marked the shit out of Kaka' in the Champion's League, while he was still with Schalke. Certainly rough, I'll pass judgement on how bad it was because I didn't watch this match. YouTube comps can show anything, although judging from Kaka's yellow card, he clearly got under Kaka's skin. Then there's the great clip of Gattuso childishly celebrating in Poulsen's face, and Poulsen pretty much gave him the perfect response. Good to see he can hold his temper. Maybe our friends at the Milan Offside can talk more about that game, or better yet, Gattuso. "I have to admit it, he has got stones to move to Serie A, where he does not have too many friends. I am curious to see how he will cope with all this pressure." Politically correct as always, Rino. (Milanista comments welcome)

Then there was the minor incident where he jacked a Swedish player in the chest. It kinda goes on. He doesn't seem to be a very friendly guy.

Here's my take on it- I'll be honest, I have not watched Poulsen play very much. He's been one of those peripheral figures I'll occasionally see in a match, but since I don't really follow Bundesliga or La Liga I don't have anything particularly insightful about his play. If you didn't know, he's a very fiery defensive midfielder. Yes, I know, God, not another one, but with Secco's obsession with all things cheap and mediocre and Ranieri's fetish with defensive-midfielders, he signed his own contract. From what I've read/heard, he does venture forward a bit more than Momo, not that that's saying much, and he does seem to be able to pass forward. Is he signing to be a first-team player? I have no idea what Ranieri's plans are at this moment. Depends if he is the only midfield signing.

He seems like the kind of player you'll hate as long as he's not on your team. Poulsen has recognized his signing is not popular, declaring his intentions to win us tifosi over. That sounds good to me. I know that given the kind of player he is, he will battle it out for us, and the games against Roma and Milan, well, he'll have even more incentive. He may not be our first-choice transfer, but he's here and I guarentee he will fight hard and passionately, as opposed to midfielders we've acquired who seemingly don't give a shit. (Tiago, I'm looking right at you) We need a midfielder (still one more, unless we stick with Tiago) and he'll do the job. Considering he is only 2million euros more expensive than Nocerino....well that's a hell of a stepup.

The customary (and only real) YouTube comp. I'm at work (aka muted) so if there is particularly horrible soundtrack, (as there usually is) my bad.

Two summers ago Milan were also rumored to be very keen in bringing to Lombardy the Danish international, but allegedly some of the locker room veterans vetoed the transfer, on the grounds of his bad temper. But all this stories do not seem to faze Poulsen: " I know that playing in Italy will not be easy for me at the beginning, especially in Milan and Rome. I also know that my reputation as a trouble-maker precedes me, but I am one that always gives 100 per cent." "I am not worried and I know I will have to win over fans, but I'm a proud man who does his talking on the pitch. I'm very happy to be at Juve, because it's a wonderful club, play the Champions League and it's one of the best known sides in Denmark".