Share All sharing options for: This Stanks; Midfield Midmarket Musings

I know, I know, it's horrible. But when you've got a name like Stankovic....it just lends itself to puns like that. I'd like to take credit for it, but it was the title of a blog posting after one of Dejan's shitty games this season. Little did I know I'd be ripping him off 6 months later. On the subject, Chris and all JuveOffsides readers, take a bow. I googled "stankovic, shit" and the first result was from the Juventus offside. The first image? From one of Chris's postings. We've put the Offside on the map as far as Stanky hating. 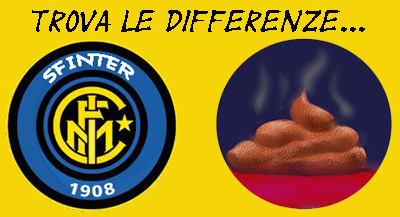 Well, ladies and gentlemen, Italy's Euro2008 foray is over. While there will be debate for some time about why, the most important thing is that Donadoni was canned. As long as Mancini (another Inter Merda) doesn't get the job, it's hard to imagine us going downhill. With the end of Euro2008, the temporary harmony on the Offsides is now over. It's time to start hating again. But this isn't about hating, this is about Juve, and how our transfer season is going. Bottom line is Blanc wants the team assembled (buys and sells) by July 4th, which is when training camp starts. Raise your hands if you think we'll be finished? Yeah, I didn't think so.

Thus far, despite the incompetence of our good friend Alessio Secco, I think we're having a decent market. Everyone knows we traded Palermo Nocerino+15million euros for Amauri, and apparently not Lanzafame. We got Mellberg, a solid Swedish stopper on a free transfer. Giovinco, Marchisio, Lanzafame, and De Ceglie are all returning to Juventus, and key players like Nedved, Buffon, and Chiellini have re-signed with the club. You can find about the other Juve co-ownership situations here.

Blanc said we need a midfielder and a goalkeeper. I really hope by goalkeeper he means left-back. If we can get one CM and a LB, our mercato is done. And it's not hard. I'd personally like Aquilani (not gonna happen) and Grosso, if not Aquilani, then Xabi Alonso. Let's look at our rumored targets for midfield. 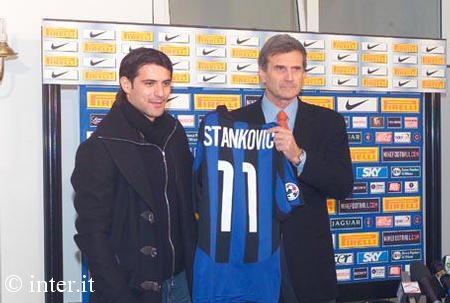 Dejan Stankovic- Uhm, no thanks. With Mancini's departure, fellow ex-Laziale Dejan Stankovic has also been moving towards the exit. Apparently it's a combination of he's pissed off Mancini got sacked, and Mourinho is not a fan. Both sound legit to me. He's rumored to want the move and further rumors suggested personal terms had already been agreed on. Luckily, our fellow Juventini in Italia caused hell and it appears have derailed the switch. Good. We were bidding for him 4 years ago when he was leaving Lazio, but he picked the dark side. Plus, I've never liked the guy. Cristiano Zanetti was neutral to me, during him time at Inter, this guy is not very good and he's a symbol of Inter. HELL no.

Alberto Aquilani- Inter's offering a shitload of money, plus the kid is a Romanista. Not gonna happen. 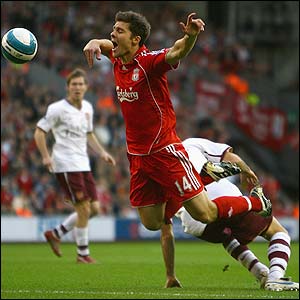 Xabi Alonso- I think our best bet for CM. We already raided Liverpool for a midfielder once, but it seems they are ok with us doing it again. He's expressed interest in joining Juve, he's a world-class midfielder with loads of experience, and Liverpool wants to offload him to get Gareth Barry. For those who don't know, Xabi Alonso is a center-mid who is a good ball distributor and has one hell of a long-range shot. He sometimes plays in a deep-lying playmaker, alla Pirlo, and he's been big in Liverpool's recent European success, which makes me wonder why they want Barry so much. He's not in Spain's XI for Euro2008, but captained the squad in their meaningless game against Greece, and he was superb. It's suggested there's only a few million pounds separating Juve+Liverpool, let's hope we can get it done. Bonus: He gets to link up with his old Liverpool mate Momo Sissoko.

Other possibilities:
------>Sticking with Tiago, Zanetti, with Marchisio and Giovinco as backup- I'd rather not do this. Tiago has potential to become great, but we need a better option than him as starting CM. C. Zanetti has been great, but he can't handle 2 games a week.
------> Marcos Senna. It was one of the strangest rants ever, if it did come from his mouth. He raged at Juventus for not buying him, and instead pursuing Xabi Alonso, mentioning the fact he was starting for Spain and XA wasn't. Despite this, he's too old, and XA will offer more to our midfield, we already have a world-class ball winner.
------>Miguel Veloso? I don't see it happening. Something to fill Goal.com's articles.
------>Podolski to Juve. It's been rumored for weeks, I see him as a great replacement for the aging Pavel Nedved. He plays left-wing more than striker nowadays, he said he's open to the move. But who would play CM with Sissoko? Nedved could, but it's not his preferred position.
------>Quaresma to Juve? This is one of the funniest things I've read. Less chance of this than getting Aquilani. We don't have the finances, he wouldn't fit in, and a billion clubs are prepared to pay a lot more for him.

Opinions? Who do you think should be our midfield next year?