A letter to Donadoni: How to fix Italy's problems

Share All sharing options for: A letter to Donadoni: How to fix Italy's problems

Remember this picture, Mr. Give Gifts? This was after losing to Hungary, 3-1. I know, I know, it's just a friendly. But "it's just a friendly" left La Nazionale's phrasebook when Lippi took over. Apparently, so did our will to win. 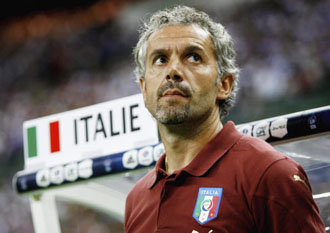 Some might mention we topped our qualifying group; that is true. But consider who was in it, there was Scotland, who did fantastic despite being terribly mismatched in player quality. France, who has their own personal version of Donadoni at the helm, mismanaging players and generally being unimpressive. He did bring them to the WC '06 finals, so you can cut him some slack. (Even if it was Bianconero Zidane carrying the team) And then a motley crew of pathetic teams. Qualifying in 1st was no great feat.

I'm glad the Don swallowed his pride after the thrashing of Holland, I didn't think he would. Actions speak louder than words, and despite defending his decisions, he revamped the squad and it helped, a lot. But that's not enough. I'm convinced, to win under Donadoni, we need to change the formation. Badly.

Most people agreed Donadoni went with a 4-3-3 to distinguish the team from Lippi's, and because of his own personal disdain with a standard 4-4-2. Whatever it is, Roberto, we are not Brazil. We are not Portugal and no, we certainly are not the Netherlands. We don't specialize in flair players, (except maybe Cassano+Baggio) we're not "joga bonito" team, and we've always prioritized defense. Cramming the Azzurri into this does not work, and it will not work.

Problems with the formation
#1- Fielding players in the wrong position- Of course, any tifoso is going to hate when his players get ragged on for a bad performance. But for Del Piero and Camoranesi, it's just because they are being played wrong. Del Piero's miserable game against France 9-10months ago was because he was out of form and Donadoni threw him in a bizarre left-midfield role. Camoranesi likewise has been a right-forward, but against the Netherlands since we had no midfield, he was kind of in between, in an uncomfortable in between. Di Natale's playing in an awkward left-winger position. Why didn't we see these problems in Qualifying? We did, but it wasn't as obvious when you're playing weaker opposition.
#2- We don't have enough flair players. We're not a team built for a free-flowing beautiful form of calcio. How many fast players do we have, how many wingers do we have? Very few. Our bread-and-butter has always been good passing and a solid defense. 4-3-3, especially in Donadoni's interpretation, does not incorporate either, especially with Cannavaro's unfortunate injury.
#3- It's built around a hitman, and he's misfiring. Lippi built his squad around Totti. Thankfully with the great passers in the squad, like Pirlo, his absense due to injury wasn't felt too strongly. Donadoni's is no doubt built around Toni, to hold up playing and generally play with his back to goal. Great idea, but Toni, despite banging in the goals for Bayern, has been pretty poor these past 2-3 games. When ADN, ADP, and Camoranesi are playing slightly out of position, it doesn't help. But he's been far from the reliable hitman that position needs.

Remedy? Duh, play a goddamn 4-4-2. Even if Milan plays with the Christmas tree and Roma players their funky total football remix, every player in the world is familiar with 4-4-2. Most roles are defined by this formation, and Italy would slot perfectly in it.

So Don, please, you've already manned up and admitted your personnel choices were wrong. It's time to admit the 4-3-3 is not right for Italy. I don't think you're the right coach for Italy but this would go a long way to improve the Azzurri in the meantime.

Every player is used to those roles. Let's do it.

PS: SECCO, PLEASE BUY GROSSO. Molinaro is a sack of shit and Fabio has been tearing it up thus far. Yes, he always plays better with the Azzurri but seriously anything would be an upgrade right now. De Ceglie is too young to carry the left defense and I do not want to see Molinaro cruxified alla Roma in the Champion's League next year.

PPS: Does any other Juventino feel Lippi is holding out for either the Azzurri job or Juve? I honestly think he wants to come back to Juve, but I am happy with Ranieri right now.