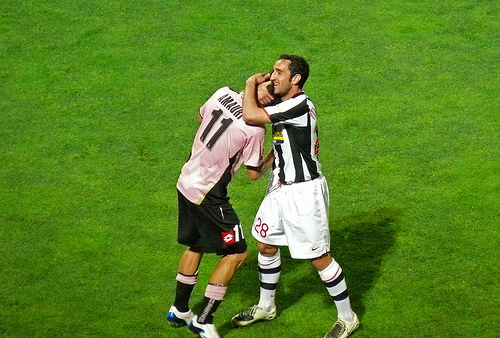 In what will be his first interview later this afternoon as a Bianconero, Amauri will officially announce his move to Juventus. Gald to have you big fella! More details to follow as they come in.

According to C4.com, the conditions of Lanzafame's new deal have yet to be determined. Palermo sporting director Rino Foschi said, "the transfers for Amauri and Nocerino are complete, but we are still sorting out the details for David Lanzafame." However, he went on to stress that all parties are happy with the deal and that things [Lanzafame] will be sorted out by July.

"When I arrived in Italy eight years ago I had a dream – to play for a big team," Amauri told journalists at his first press conference this afternoon. "Today I have realised that dream. I am happy and I want to win with Juve. It’s true that Milan were also interested, but Juventus were my first choice," he said.

On the other end, Nocerino had this to say about his now former club:

"This is goodbye for me, I am going to Palermo and I am happy and proud with the choice because it is a big stage, an excellent squad and a great city. I will also be close to home, which makes me happy. I can’t wait to get started with my new shirt. I’m not stupid and I know that footballers come and go. It was an honour to wear the Juve shirt and I am leaving on good terms and without any bitterness. I enjoyed being in Turin, but now we have gone separate way."

Palermo have a diamond in the rough on their hands, and let's hope he does well in Sicily. Finally, I must admit despite all of the rumours, Nocerino, Amauri, and the Rosaneri, were pure class throughout this thing.