Amauri Travels To Torino, Maybe This Can Work

Share All sharing options for: Amauri Travels To Torino, Maybe This Can Work

Now, I know what you're all thinking. Some of you tifosi bianconeri are probably happier now then the day you first discovered alcohol's magical powers of seduction on the opposite sex. While the rest of you are sick to your stomachs much like the first time you were excessively introduced to the aforementioned aperitif (the booze, not the sex). In any case, it is still with great pleasure that I announce, before this week's official unveiling, the return of myself! Who did you expect?... Amauri?

Well in fact, if you had guessed the Brazilian striker you might finally be correct. Along with my return to The Juventus Offside, in the next few days Palermo's striker might be back in black and white for the first time. According to various reports (of which have now climbed to nauseous heights), Amauri will undergo a medical today in Turin before the club officially announces their latest signing. Of course these medicals are just a formality so if in fact these reports are correct, then expect to see him shaking hands with Gigli, Ranieri, and Secco in a room full of flashing camera lights real soon.

"The transfer soap opera has been dragging on for a few months now, with there being various problems over a transfer fee, exchangeable players, as well as Amauri’s wages. However it appears as if all these issues have been resolved, and Juve will pay Palermo €10m, as well as include Antonio Nocerino, and half of Davide Lanzafame’s contract as part of the exchange. Amauri himself will sign a four-year contract, in which he will earn approximately €3.7m per season." Gianni Wilson

A soap opera indeed. It must come to no one's surprise that these talks dragged on for a few months, and perhaps longer, given the positions of both clubs. Zamp, the very outspoken Rosanero head, was a pain in the ass of many Juventus supporters as he had publicly made our future starlet Sebastian Giovinco his main target on several occasions. To many Bianconero fans, including myself, the prospect of losing Giovinco was so unthinkable that it tainted the entire transfer, and indirectly attached a negative connotation on Amauri and his abilities. But hey, that's football and you can't hate on Zamparini for doing his job. Now that Giovinco's off the chopping block though, this transfer rumour has become somewhat appealing. 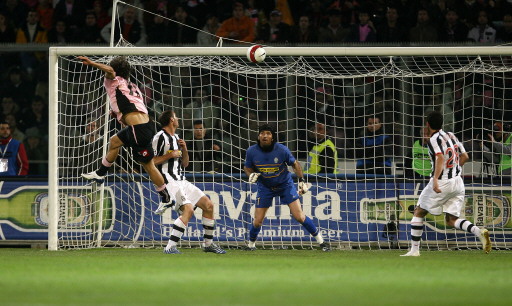 As a staple on Steven's Palermo page, Amauri has definitely earned all of the attention he's been getting. In 52 games with Palermo he's scored 23 goals and assisted on more than his fair share with a unique blend of attributes. He's a big man at 1.88m (6 ft 2 in) , and presents a very easy target to hit up field. More specifically, it's that easy target trait that has me interested in what he can bring to Juventus' table.

Despite Trezeguet's banner season this year with 20 goals (this is where I need to choose my words carefully), he would, on occasion, dissappear from the game. Without trying to sound too much like Domenech here and to be fair to T-Rez, that's never been his game as it's the rest of the team's responsibility to support the attack and supply their goal poacher. Obviously, Juventus have proven that system is successful and by no means am I advocating a switch. Tactically, Amauri adds to it by bridging that gap between Trezeguet and the cavalierly with his ability to trap the ball with his control and elude challenges with his creativity. Palermo fans already know what I'm talking about here, and the Brazilian definitely got a few Bianconeri imaginations running after this performance in week 32.

What Ranieri and I are suggesting is that we need Amauri for some added quality up front come next season. “We will be playing in the Champions League and we need four versatile strikers,” Ranieri told Sky Sport Italia. “This year, Iaquinta played well alongside both Trezeguet and Del Piero. Therefore, I am convinced that Amauri can play well alongside all three of the strikers I had at my disposal this year.” You can't really argue with the Tinkerman here. Just look at the pick of the lot in Europe and you'll see it's no concidence there's an overabundance of strikers on each club. It's no secret it takes depth to win in Europe, and Amauri would certainly add to ours in hopefully a non-distruptive way.

Finally, now I think the price is right. With Secco locked inside the kitchen pantry and thus Giovinco, De Ceglie, and Marchisio off-limits, there's a chance we can come out on top of Palermo on this one. Although I'm not familiar with the Rosaneri's tactical needs, I do know that Juventus isn't going to cry over Nocerino. As it stands he's behind Sissoko, Zanetti, Camoranesi, Nedved, Palladino and then eventually Tiago, Marchionni, and of course Giovinco in our midfield's pecking order. Nocerino's biggest problem, as our reader Adam put it, is that he's the type of player to do one good thing, and then two bad. So honestly I'm glad to see him go. Lanzafame on the other hand has impressed me enough with Italy's Under-21 team that I'd be thrilled to retain half of his ownership. A loan to Palermo would be good for both him and the Aquile, even though he badly wants some fish and chips.

Hmm, it just feels as though we're forgetting something. Gosh, what on earth could it be?