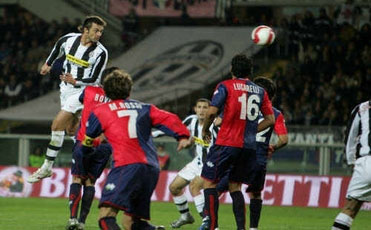 Headin' into town today? Well just pick me up some 'jesus-what-the-hell-happened-over-these-last-three-weeks?' Nothing that's what. Well, three weeks without a win to be more specific. Now are you ready for this? As astonishing as it might sound, throughout our club's entire one hundred and eleven year history, we've never gone three games without a win. Unbelievable eh? Crazy even. But rest assure, if Goal.com says it to be true, then it's as solid as was the decision to loan out Domenico Criscito in favour of the now cankerous Cristian Molinaro in defense. In any case, regardless of our club's current managerial deficiencies, this evening's match against ninth place Genoa will set the stage for what many Juventini hope to be the start of positive things to come once more. Join in on the commentary as our Bianconeri battle last year's Serie B beauty pageant's runner-up.

So here we are, Sunday afternoon one point ahead of Fiorentina (who lost against Siena earlier today 0-1) and now only two up on Milan (who took all three points away from Empoli this afternoon 3-1). Well heck, no one said making the Champions League in Italy this year was gonna be easy. In any case, from here on out, Juventus must try their best not to lose points against anymore mid-to-low table teams. A strategy, which if you've been paying attention thus far, has seemed unsuccesful. However, in the midst of our recent coaching/managerial lack of faith, as well as T-Rez's impatience at not having won lo Scudetto by now,  Ranieri's men must head into today's game in Genoa with the intentions of destroying the Rossoblu beyond any shadow of doubt.

* Nedved is still surving that dubious two match penalty so he'll miss the trip to Genoa this afternoon. I should mention as well that thanks to the graces of some single celled bacteria, Molinaro won't be called up for this one . Good thing too because without Nedved in that left midfield spot, Molinaro seems about as useless as a broken lawn-mower. Expect either Grygera or Stendardo to take his place at LB.

* Our central defenders should be Legro and Chiellini with Zebina flanking on the right as usual. Keep in mind though, our back-line is still shaky at best. We still don't even have most spots filled by our player's natural positions, so leave room for Ranieri to play around here. Shit, predicting our defense is just impossible these days. Did Andrade die? Expect T-Rez and ADP to start up top with Camo, Momo, Zanetti and Pallo in mid behind them.

* Some good news, Marchionni worked out by himself with a ball at team practice yesterday. The injured midfielder was just regaining his form before he limbed off the field due to a broken bone in his left foot a couple months ago. I can't wait to get this guy back. Hopefully just before Camoranesi re-injures whatever he has right now.

**For viewers in the U.S. and Canada, the game is one hour ahead due to our Daylight Savings Time**

**As a result of my own oversights, I will only be able to live blog for the first half of the game as I have my own football match to attend.**

So Salihams gets the nod over Palladino on the left... Grygera taking Molinaro's spot on the left.

2' Good pace to the game as both teams take their first runs at each other respectively.

My apologies, reception is terrible here... I'll record the game then watch it for a recap...