Following a steady week of drinking, smoking, lounging, and the occasional meet and greet with your comrades behind that shady school parking lot where the envitable soccer ball is brought out for an impromptu 3 on 3 match, it's time for our bianconeri to get back to business. This Sunday Parma comes to town in hopes of spoiling my two week long binge-drinking marathon. By the way, operators are standing by around the clock for your donations as my booze is running a little low. Also, as a sign of good faith ahead of this weekend's fixture, all of the proceeds from returning the empty cans and bottles are going directly to Parmalat's head office.

Anyways, we all know I'm kidding- I would never give Parmalat any coin. In any case, let's get back to the game at hand. Parma is a great club, or at least was at some point. I remember as a young lad growing up in Toronto's little Italy about fifteen years ago or so, Parma came to Canada to play our CNSL All-Stars at the old Varsity Stadium down on Bloor St. I remember going with my old man and just being floored by the atmosphere in that stadium that day. 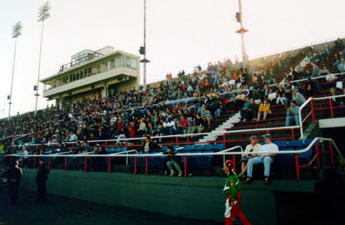 I did some research and here was the line-up for both squads:

Yes I know what your thinking, that was Diego Maradona's brother playing for us! It's his half retarded brother Lalo! He was the only one doing anything right the entire game, naturally. Either way, the final score was Parma 5-CNSL 0. Goals came from Baggio, Sesini (2), Stoichkov, and Apolloni. Really though the goals didn't matter to the 18,000 people who showed up. They cheered on Parma more than that make-shift Canadian All-Star team. Anyways, that was the day I fell in love with beer nuts and hot dogs. Oh and the game of football. Fast forward ten years or so and my love for beer nuts, hot dogs, and football haven't changed. Thank you Parma, thank you for everything. But let's get back to business, as I've said about five times or so thus far.

Juventus, coming off of their season's most delicious victory, must put that aside and expect a heated contest this weekend. Facing relegation teams are never fun. They're scrappy and fiesty. Gypsy-like almost. But gypsy in a good-looking Brad Pitt "Snatch" kind of way of course. So, we need to stay on our toes and play our style of football. The minute we start getting into their bare-knuckle boxing style we're... well you what happens next- out a fucking caravan!

"Juventus, have no suspended players. And no new players are at risk of a suspension. Legrottaglie and Molinaro, the only Juve players booked at the Meazza, have reached a tally of nine and two cards respectively. The players who risk suspension if booked are Trezeguet, Palladino, Nocerino and Grygera." -Juventus Official Site. That could all change this Sunday when these teams meet up for the second time this season. Anyone remember the first one? You know the one with three reds, two late goals, a fight, and one injury time winner that was called back. Good times.

There really is so much linking these two teams together. But apart from our history, of which Juventus has severely dominated the wins column, we should be in a for "nice" display come Sunday. I suspect though that it might be a little one-sided much to the chragin of Parma fans everywhere. Anyways, check out Francesco's take on things at the Parma Offside. He has a nice little number on Juventus' youth prospects too. A man can dream can't he?