Offsiders listen up: I'd like to introduce to you my brand new segment called "Coach's Couch". Here we'll tackle many of world's famous tacticians and their questionable techniques-- all from the marvellous vantage points of our couch. This is a relatively new idea, so of course there'll be some changes and improvements made as we move forward- I'm sounding like a coach already. For now, this is just about Juventus, but in the near future I'll try and get some of YOU to talk about your favorite teams, and their coach's inevitable mistakes or moments of genius. With that said, in our first segment we'll tackle the formations, strategies, substitutions, and their overall effectiveness in last Saturday's Derby d'Italia match: Inter v. Juventus!

From the start of the match, literally after only ten seconds, Inter came right at us.  With deep runs from Maicon on the right, in addition to a much more organized and relaxed midfield, Inter completely controlled the match for the first ten minutes.  Juventus were initially reduced to a houseleague team.  They were scrambling to clear their half, and rushing into harsh tackles.  At this point I was cutting out the eyeholes in my brown paper bag.

However, after the first ten minutes or so, the Juventus side I described in my Holy Trinity of Football Fundamentals, or H.T.F.F.'s, began to appear.  Mauro Camoranesi lead the way, and our guys began to remember the meaning of 'possession' and slowly but surely levelled out the competition. Working well with Sissoko alongside him, Camoranesi anchored our right midfield and layed some foundation for passing plays that attributed to Juventus' growing confidence, patience, and creativity. 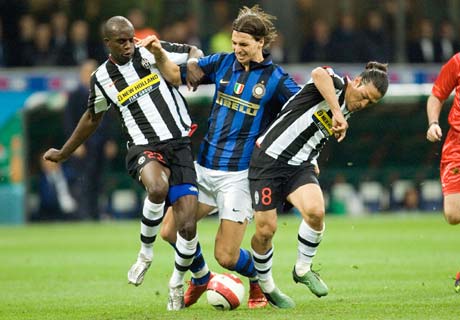 Around the thirty minute mark, things began to get a little less polished and a little more scratchy.  Marked by a clearly deserved yellow card for Molinaro, the newly forged flow of the game was seriously threatened.  The referee, Stefano Farina, had began to blow the play dead more times than Palermo head Zamparini.  But in Farina's defense players were making dumb tackles, and others were making dumb dives.  At this point, just as the game's sheen had worn off, Juventus began to pick up the pieces.

Ten minutes before the break, it was the more determined Juventus that began to make the difference in ending the midfield deadlock.  With a little extra effort in their challenges, the bianconeri found themselves controlling more of the game's tempo.  Playing with greater width and depth, thanks to the services of one Alessandro Del Piero in particular, Juventus legitimised their intentions of handing Inter their first home defeat of the season.

Much like Inter at the beginning of the first half, Juventus applied the pressure from the start of the second. In what would mark the beginning of an 'open' style of play that would last the rest of the match, Mauro Camoranesi silenced the home crowd as he netted his fourth goal this season.  Off of Molinaro's fifteen metre pass, which made the offside decision tight, Juventus took the lead in the forty-eighth minute.

Feeling the heat like a bad rash, Mancini threw on Suazo and shifted his game plan to a 3-3-4 formation. While Juventus continued to manage to string their share of passes, Inter's attack gained some steam as Mancini's move was looking promising. However, after some good work by Sissoko, Nedved, and Camoranesi to move the ball around safely out of their half and into Inter's final third (via some H.T.F.F.'s), Juventus compounded Mancini's heart burn by doubling their lead with some vintage Del Piero-Trezeguet linkage in the sixty-second minute. 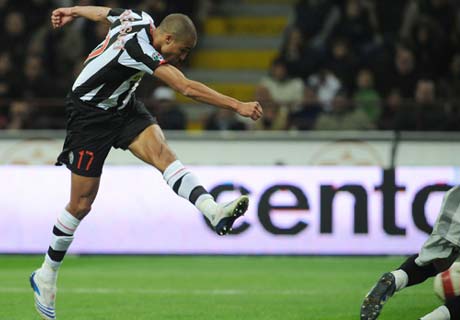 Mancini's focus now became obviously centred in attack (aside from keeping his job). From Maxwell and Maicon to Ibrahimo'bitch and Suazo, Inter began their desperate push for an equaliser. From a tacitcal perspective though, it seemed as if Mancini's three-man midfield weren't covering enough ground as Ranieri's middlemen were still able to control themselves and the ball. Inter then reverted back to a four-man front in midfield (4-4-2) with Maniche coming in for Cruz.

Dividends were immediately shown as now the Inter ship had found their threatening edge.  Coupled with the flank advancements of Maxwell and especially Maicon, who after making made some excellent touch-line moves in Juventus' final third, set up Maniche for an easy tap in. Ranieri's stomach was no doubt beginning to turn as much as his statesman-like exterior suggested otherwise. However our coach, much like many tifosi bianconeri, knew that our time had come for some fresh legs as well. 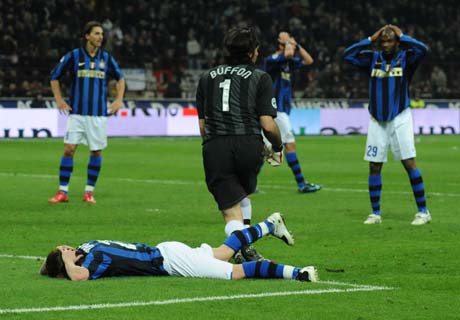 In came Iaquinta for Trezeguet. A move that was probably meant to keep Inter's defense honest- with almost all of them being pushed up and all. On the other side, Mancini was going for broke. In came the seventeen year-old Balotelli in place of Chivu and once again Inter's efforts became heavily lopsided, and understandably so. Though perhaps a bit too late, Ranieri opted for a fresh pair of legs in Nocerino and decided to keep his defense intact. A notion that was well-founded as Juventus' backline had stuck true to the philosophy, "bend but don't break."

Coach's Verdict:
Well this was an easy one- Ranieri Wins! No, this doesn't have to do with the scoreline at all. Ranieri acted, Mancini re-acted. Towards the end of the first half when the game's tempo was choppy, Ranieri acted not by way of substitutions but instead, he motivated his side to raise their efforts of determination in 50/50 challenges. In contrast, Mancini's approach was limited to substitutes and perhaps not real coaching. In the second half, Mancini went (4-4-2) -> (4-3-3) -> (4-4-2) -> (2-3-5) -> (fired). You just knew who's side was better disciplined. On defending corner-kicks for example, Mancini likes to play zone, so Ranieri had all of his men stand outside the box before the delivery. Then they'd run in, and confuse their markers. It didn't lead to much, but a sign of tactical dominance on Juventus' end nonetheless. Ranieri was intuitive, Mancini just sub'd. 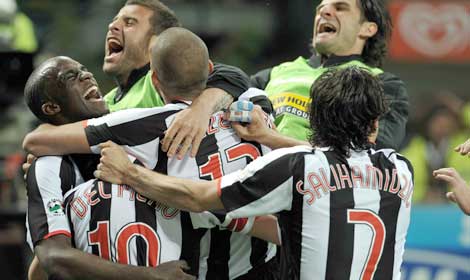