First and foremost, apologies for the lack of general attention to the Old Lady blog. I've been overseas securing reserves for my new Cambodian breast milk venture. But now I'm back at home and ready to spit out some more of these posts. What great timing too!Our glorious club of clubs take on those babies in blue this Sunday in our home town. We'll give 'em a nice welcome, but that bus ride home is gonna sting like a bitch though. We need to win! Wehave to win! We need all three points. Not just because we're playing against Napoli, but because it's time we take control of our own destiny for the next eleven matches. This is Juventus- winning is in our DNA! 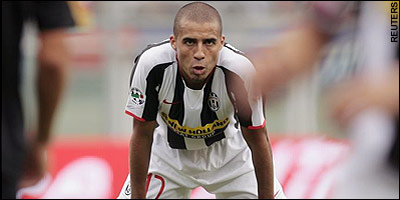 Come get a taste.

Who the fuck do you think you are? I'll tell you who. You're a fan of the greatest damn club in the world...walk like you gotta fucking pair ok?! Time to quit the talking boys and put some W's back in the game column. I'm sick of this half ass'd opening to 2008. Four wins out of ten is bullshit for us frankly. For the remaining eleven matches I want d-o-m-i-n-a-t-i-o-n, nothing less. This is our club, and we deserve it all.

“This is the time when we need to accelerate" (ADP).

Amen. Management needs to listen up here cause we're only gonna say this once... burn that Molinaro and keep Grygera on the left for the rest of the season. Ok, for this one against Napoli since Zebina and Legrottaglie are suspended, we're gonna need some gritty fucking defending here. Unfortunately that might mean allowing Molinaro on our stadium property to sit on the bench. But thank the Lord we can still do without him in our starting eleven. We'll put Salihams at RB, Stendardo can go in at RCB next to the monster Keiser Chiellini at LCB. Speaking of Chiellini, he's gonna have to take charge of our entire defence in this one. If there was ever a time when he wanted to be a pilar of strength in D, now's his chance. He needs to get juiced-up 'Bill Romanowski style' and come out with an incredible amount of controlled aggression for this weekend's clash. Then, we'll slot in Grygera at LB from the start (hopefullly), and let the Czech run his head off.

With Camoranesi suspended, and thus our hopes and dreams of a creative display tomorrow thrown out the window, we need Palladino to playing some quick one-two football at RWM. I'm not 100% happy with him and Salihams together on that side, but due to injuries its the best we can do. Anyway, we have Pavel 'Who Will Tear Your Fucking Face-off' Nedved fresh from Chino in this one. Yeah that's right, Nedved's back from serving some hard fucking time. He really misses football, wiener schnitzel, and the sight of soap suds flowing down the crack of some guy's ass. He's gonna be the key to the game here I think. With Zanetti out (fuck, with his work ethic I saw that coming), Camo out, and Palla in, Nedved is going to be the only genuine link between our attack and our kinda sorta line of kinda sorta defenders here. Nedved and Chiellini are gonna be called on a lot in this one, I mean a lot.

Then there's of course the ever absent Tiago. We've hated him, loved him, hated him, and loved him about twenty times or so. What's weird here is that he hasn't even played for us in six months practically. Either way, Ranieri has come out to say that it is once again 'Tiago's time to shine'. So we'll be watching to see if Tinkerbell actually gives Tiago the start in place of Nocerino. As far as Ranieri's faith in Tiago goes; Why now? and Why, after not having thrown him any bones in the last couple games, does he feel as though he's ready to start for 90 minutes... against Napoli even? Oh well, fuck it. Nocerino is still stinking it up- maybe that's Ranieri's deciding factor...

In attack, shit well it's simple. Iaquinta and Trezeguet up front right from the start. No ifs, ands, or buts. ADP comes off the bench in this one. My theory is Napoli's gonna come out looking to stir the shit, and with the talent they have (even without Zala) they can cause some problems. So, since nobody likes playing against hustlers (at least this guy doesn't) we'll let Iaquinta get his cleats dirty and win us some 50/50 balls. As if we need any more with Momo in our line-up though, hahhaah. Speaking of Sissoko, I didn't want to have to say this but... "I TOLD YOU SOOOOO"! This kid is making a comeback with the Bianconeri and I for one am loving every minute of it.

Men of the Match: Nedved, Chiellini, Sissoko, Iaquinta, and Buffon

* Nedved wants a Champions League and dammit he deserves it. The beautiful one is in my estimation playing some the best football I've seen this year period. He's first touch is better than any other player's entire career over the last 30 years. Yea that's right Maldini I said it. “I absolutely want to secure Champions League qualification, as that is the season’s objective. We are working hard and things are going well - the win over Genoa has given us confidence". Holla back Pavel.

* Buffon for the Prime Ministre... or President... or Grand Chancellor of Italy! Extending his contract to 2013 is just music to my ears. He is the heart and soul of Juventus. Not only is he one of the greatest talents in the world, but he's a sportsman's sportman. I feel compelled now to win a Champions League next year and apparently so does our management! One of the convincing conditions was that we'll sign three top-class players this summer and that we'll fire that mutherfucker Secco! Ok I lied about that Secco thingy... or did I?

* Secco is reportedly being shipped off to Genoa in a little fucking box, chopped up, and poured all over with Canadian Maple Syrup! Damn I only hope Goal.com is right about this one. Apparently, we're getting a blind monkey to fill his position. The kicker is, we're surgically implanting Moggi's brain in for the chimps... Scientists have already figured out a successful way to make up for the empty space left in the chimp's skull after the procedure is complete. In any case... I'm happy