Not so big of an opponent, but big game nonetheless. Now, I don't want to offend any Reggina supporters out there but lets be honest, there are none. Terribly sorry for that jab but your squad is in second-last place, and well, we're soon to be polar opposites. So shamelessly, we're looking right past you all the way to the Olimpico as those white ankle tapers take on Fiorentina this weekend. So you see, if all goes accordingly, we'll be sitting shotgun in the Champions League caravan if the Viola can manage at least a tie. Mutu you beautiful bastard, what a screamer against Catania. Of course I'm talking about your on-field, impromptu 'So You Think You Can Dance' audition. Brilliance. Yo, we got your back this weekend. After all, it wasn't that long ago you wore our jersey on yours.

Starting off with our beloved Buffon update; our 'number one' will worrisomely miss this one for the sake of his back. Fuck. I mean take all the time you need. But I'm getting a little antsy as it's almost sounding like "chronic" could be added infront of his condition. Trust me, I hate how my mind automatically assumes the worst. But seeing as his condition hasn't been directly addressed- are we just biding our time and playing him in clusters before the dreaded phrase, "post-season surgery," is uttered? If that is the case, and Buffon is playing through pain (whether it's the boardroom or Buffon pushing himself), we are taking a serious serious serious risk. I'm talking a "who-gives-a-fuck-about-the-Champions-League-when-he'll-never-be-the-same" serious risk. I don't know, I hope I'm reading too much into this. Anyways, Belardi gets the nod. He's had some practice, he'll do fine.

So as for the defensive regulars, Grygera, Legrottaglie, 'Keiser' Chiellini and the newly Azzurri motivated Molinaro will make up Ranieri's backline. Coming off of two strong performances, Zebina (who would in most cases certainly get the nod over Grygera) will unfortunately miss this one due to some knee pain so the Czech gets to start. As for Legrottaglie and his play, he's riding quite some wave thus far, as he's managed to consistently convince me he deserves a starting spot next season- even if his deflection against Roma was to have gone in. Moving on, the Keiser is playing hard, physical, and relentless- what else is new? As for Molinaro and his Azzurri call-up chances... shit do I cut him up, or don't I? How about this, for the sake of team spirit I'll say that many would prefer ADP getting that spot instead of him. Just keep doin' what your doing Molinaro but with more of a defensive attitude and maybe that call could become a reality.

In the middle of the park we have some great news. Nocerino won't be starting or even playing for that matter. Hooo-Rayyy!!! The funny part is, it wasn't Noce's poor form or Juve's midfielding healthy stint that forced Ranieri's hand... No, it was none other then Nocerino's rampant tackles themselves that landed him his suspension for this Saturday. Boy oh boy, I didn't see that one coming! Most Liverpool(ians) worried about Momo's card percentage, but beside Nocerino, Momo will look like he gets less cards than Moratti on Valentine's Day. Speaking of Sissoko, hopefully that guy will start and its about time. Against Roma you could tell his confidence wasn't entirely there yet, but it's growing with every touch. Soon he'll be an impact player for our club. Speaking of impact players, Camoranesi is now more frustrated with himself than anyone else is of his recent nagging injuries. So, let's hope the guy isn't asked to play in this one so he gets a chance to rest. Also, expect Salihams to take on the right wind task as Palladino might be asked to play up with ADP in attack. All in all, it should be a determined midfield against Reggina, as Ranieri will opt for four mids - Salihams Camoranesi (or Momo) Zanetti Nedved. 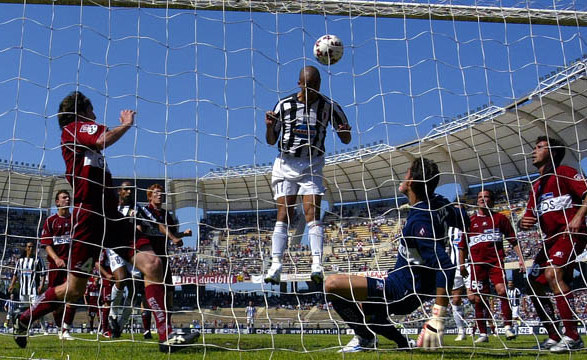 Can your favorite striker levitate?

Up front: Iaquinta's out due to an apparently contagious back pain and T-Rez might miss this one due to the flu. So forget the 4-3-3 Tinkerbell surprised everyone with last week in our victory over Roma. ADP will probably man up with Palladino then, and that should do enough to keep those Calabrian fans at bay. Let's hope we can play T-Rez though and get his name on the damn score sheet again. I swear: every game that goes by where Trezeguet doesn't score I do one hundred sit-ups and push-ups. Now after three games I'm getting pretty fit (or less fat) and I don't like it one bit. Hopefully that will all change soon. As for Del Piero, most players could only wish they'd be as hot right now as our captain. But instead they're only as hot as that nasty rash on their sack. Dammit, that's just me... should have worn a condom. Oh well, with or without T-Rez and Iaquinta, ADP can seemingly do it all at the moment soooo Forza Alex and Forza Juventus!!!

Should be a hum-dinger of a match as every relegation-bound club puts up a fight this time of year. However, Reggina will eventually secom to our superior quality over the course of the match.