Bianconeri Second Half Attack; Roma's Lead To Get Pulled Back!

Share All sharing options for: Bianconeri Second Half Attack; Roma's Lead To Get Pulled Back! 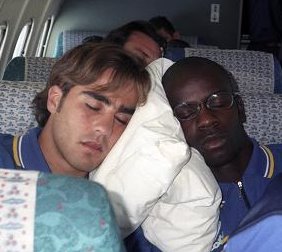 In what was a patchy display of superiority against Udinese last Sunday, our Juventus at long last returned to their winning-ways as they grabbed three crucial points from a demonstrable top four Serie A contender. From what began as the reoccuring nightmare for Juventus that was Udinese this season, ultimately turned into another dreamy Bianconeri display of goalkeeping valour, and clinical finishing. Albeit there were moments where our less than desirable qualities ran rampant, we should take comfort in our club's ability to regularly closeout opponents even when the chances of victory seem bleak-- a quality countless top tier teams struggle to attain. Speaking of Roma, this weekend's clash should once again prove to be very entertaining, as we focus our sights on turning Juventus' Champions League wet dreams into a reality.

In the first half of our match against Udinese, contradictory to many of the reviews I've read thus far, Juventus didn't really have that bad of a 45'.  I mean, sure, no shots were recorded on Udinese's net; which was pretty disgusting, but our boys did alright with controlling the game's tempo and even managed to string together a few nice runs.  Arguably our two most active players responsible were the newly reactivated Camoranesi and Zebina.

Camoranesi ,who might now be deactivated once again, did what he does best as that essential link between our defense and attack.  No he didn't have a flawless day of passing, you're right, but more importantly, he was our only player capable of holding onto the ball long enough in order to initiate anything remotely resembling an attack.  The second player deserving of a notable mention was Jon Zebina.  This RB had one of the more energetic halves I've seen in a while.  For semi-conservatively joining in on attack on the right side of the park with a certain degree of success, as well as remembering to come back and help Legrottaglie who had his hands full in the centre, Zebina definitely justified Ranieri's starting eleven placement.  Are you paying attention Tiago?  Write that down.

Yeah, apart from those two, stuff looked bleak.  Maybe it was due to the steady supply of final balls into their final third that stunk like shit...no? It was so poor; it actually worked like clockwork.  Legrottaglie passes to Zanetti. Then he sends it off to Camoranesi, who then passes to Nedved.  The Czech first-touches something wicked to Molinaro, who then lines up a 'give and go' with Zanetti.  The LB didn't have a great game as his 'give' goes wide of Zanetti-- straight giveaway, and his 'go' ends up with him knocked down face first after running into a defender.  What a brilliant display of degeneracy that was.  Anyways, the first half...mmm not so much.

In the second half a few things changed.  For one; both teams seemed to come out of the gate running their heads off following the ball.  No doubt the cause of both coach's screaming suggestion that they should pressure the ball more and force the play.  Once the dust settled a little, Udinese seemed content to soak up some of our attack and try their luck at a few counter attacks.  Even with the speedy Di Natale though, Udinese never managed any odd-man rushes so as a result their attempts failed.

In the meantime, Juventus worked together as unit, ran a little harder at Udinese, got some stops (Buffon=God), and finally broke through on a beautiful Camoranesi header.  Credit goes out to Camo.  He was having a rough game but stuck with it and pressed on.  As the game wore on, and the Udinese hierarchy up in their ivory palace began to look more and more menacing, Ranieri made another one of his brilliantly timed subs as he took off T-Rez in favour of the scrappier Iaquinta.  Then thanks to some incredible right/left one-touch moves, Pavel "The Mayor of Turin" Nedved immediately sprung the ex-Udinese who gave the home crowd something to talk about. Beeeauuuuutiful finish.

Oh boy, Iaquinta's right.  This Saturday's game is a Champions League playoff alright.  You see, its one thing to qualify for the CL by finishing in the top four of our domestic league.  However, its something completely different if you qualify in the top two.  The thing is (you might know this already but I'll say it anyways), alongside the bright and shiny CL invitations that the first and second place squads receive, respectively, they're also awarded an automatic entry into the 32 team group stage.  Which means they are exempt from three qualifying rounds prior to the round of 32.  Good deal right? I sure as hell think so.  Look it: the truth is we aren't anywhere near the calibre we once were the last time we played in that competition.  Even after Gigli makes good on his transfer promises this year, we'll probably still be more than a few men shy of the depth needed to prolong our CL campaign well into the spring months.  So... if we're already in third, why don't we just fucking give'r and shoot for it?  Hell, there's no point in stopping now-- a victory come Saturday would bring us within only one point of the round of 32.

As for the specifics regarding our roster for Saturday's big game, we have good news and bad. The good news is none of our boys will miss this one due to suspension, which means Ranieri regains the services of Stendardo in defense. The bloody flippin' horrible news is that Camoranesi might miss this one on account of a lower back strain he picked up during yesterday's team practice. Breathe... Breathe... Breathe... Now I'm gonna hold my breath and hope the news bodies who broke this story (Channel4 and Goal.com) turn out to be the inaccurate gossip-hunting football sites I've come to hate. Jesus, what the fuck are they doing in practice anyways? Shit, alright well there's no time to cry over spilled milk. It seems a little weird to say this, but Ranieri actually has a handful of substitutes he can slot in German's place.

Palladino- He had a good showing definitely. Really dynamic runs along the right. He reminded me of a young Zambrotta at times. Well ok, maybe a Zambrotta without the occasional mindless step-overs. If Palladino can manage to wrap enough white ankle tape around his entire body come Saturday I think he'll definitely look faster too. Wow-- Is it a bird? Is it a plane? Ya it's Arsenal's scouting jet coming to watch the game! He'll start against Roma and I'm actually for once happy he's there.

Momo- Obviously not one for German's place, but if Ranieri can get his finger out of Nocerino's ass then Sissoko can take a seat beside Zanetti on the right with Palladino flanking Momo. Of course this all depends on whether Ranieri wishes to start someone either than Nocerino. If nothing can stop our coach from starting Nocerino then we'll definitely see him make a substitution as early as the start of the second half on account of Nocerino's lost form at the moment.

(4-3-3)- Maybe Tinkerbell is feeling a little lucky. Well actually he's feeling a little nervous. In all seriousness though it worked out for us last time as we managed to get to Roma early. But then again, Ranieri has pretty much solidified a (4-4-2) mentality in the team by now so fuck it.

With regards to Roma's system I have little to no idea what they employ. I wish I had the time to care, really I do. But it's always been something like a 4-2-3-1 with Number 10 somewhere close to the top.

The match will definitely have a lot of ___________. Expect tempers to flare on the pitch and on the Roma blog. 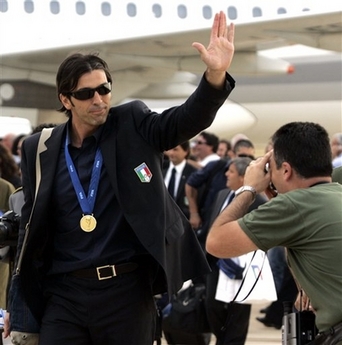 See you soon Romanistas, Gigi will be waiting for you.

*scroll down to the comments for the latest in news and rumours before Saturday's big game. Thanks! FORZA JUVE!!!