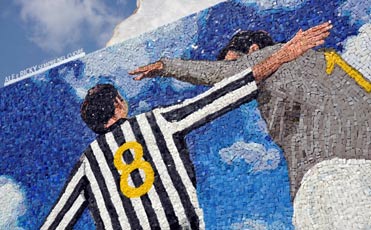 If you watched the pregame festivities of Juventus-Milan last night, you probably noticed a significant amount of golden flags being waved. 22,000, to be exact. These were distributed throughout the Olimpico in remembrance of Ale and Ricky, who passed away two years and one day ago. Sempre nei nostri cuori. A few weeks ago there was a dinner in Siena from the foundation; notable attendees were Giovanni Cobolli Gigli, Gigi Buffon, Gianluca Pessotto, Michelangelo Rampulla, Luciano Spaletti, Christian Pasquato and referee Matteo Trefoloni. Here are the other things the Alessio Ferramosca e Riccardo Neri foundation and Juventus are doing to preserve their memory forever.

In these two years the youths from the Berretti team have remained in the hearts of all the Juventus supporters thanks to the many initiatives organized by their families and by Juventus: first the tournaments and the fund-raising soirees, then the naming of field number 8 at the Juventus Center in Vinovo and the mosaic by artist Leonardo Pivi close to the pitch. The last episode, yesterday at the stadium, where the public waved 22,000 golden flags offered by the "Riccardo Neri e Alessio Ferramosca" Association – in front of the parents of the two youths who watched Juventus-Milan beside Giovanni Cobolli Gigli and Jean-Claude Blanc.

After two years the memories of Ale and Ricky is as alive as ever. 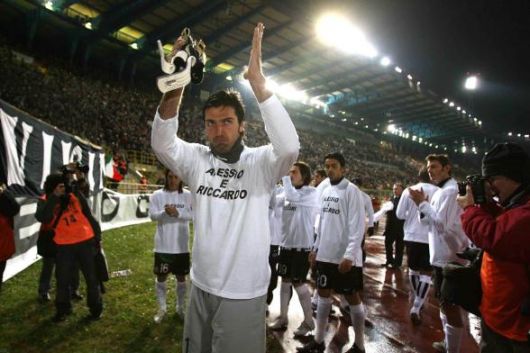 -Del Piero and Chiellini both called to make it 9/9 points after losing to Inter. They've done well to do so thus far, conquering the Stadio Via del Mare and of course beating Milan at the Stadio Olimpico sunday night, spectacularly so. Just a tricky trip to Bergamo left. After a very strong start, Atalanta has slowed a bit but still look very solid, certainly a top-half-of-the-table team.

-Nedved won't be making the trip, he left the pitch due to a strain in his left thigh. There's a bit of inflammation and bruising. It's nothing too serious, but enough that he's ruled out for the weekend. Camoranesi might play, despite failing a late fitness test against Milan, but I'd like to rest him. Marchionni has been doing well gaining consistency and fitness after a lost year, and Camoranesi said pre-Milan that there was still a bit of pain in his shoulder.

-Christmas break coming up!! Thank god, the team has 3 weeks to rest, maybe play a friendly or two, and get ready for the second half of the season. With the Champions League knockout stages coming up, the Coppa Italia, and of course the Scudetto race, it promises to be a long grueling battle. Our boys will not only get a much needed break, but after the break we can count on Trezeguet, Buffon, Brazzo, Poulsen, and Tiago to be back from their long-term injuries. Nedved and Camoranesi should be fully fit as well. The only long-term absentees are Knezevic and Zebina, expected back in early February or so. And Andrade's out, but that's kind of a given.

Milan Thoughts and an mCalcio review:

-The contrasts couldn't have been any stronger. Milan looked old, tired, and semi-Brazilian. Juventus was relatively young, energetic, and mostly Italian. The average Juventus age was about 26. The average Milan age was about 31. We fielded De Ceglie, Marchisio, Molinaro, Chiellini, all Italians under 25.

-Del Piero was brilliant last night, and really should have gotten on the scoresheet with a smart fake to throw off Ambrosini. Every calcio fan knows stats don't tell the whole story, and Alex has been evidence of it recently. He's had a decent scoring record, but he's constantly been a threat and has been in top form.

-Marchisio and De Ceglie were two of Juve's best performers on the night, displaying all the potential we knew they had. Many thought Giovinco was Nedved's heir on the wing, but after seeing PDC's display, why not him? Marchisio was brilliant with his passing, defending, and dribbling. Also very unlucky not to get on the score sheet after some fine shots.

-We conceded two goals, but only one can really be considered a defensive mistake. Two deflections for Ambrosini's goal means neither the defense nor Manninger can really be held responsible. Milan had a few good attempts on goal but otherwise our defense (with an average age of 26.5, as opposed to Milans' 33.5) looked confident and assured.

-Marchionni also deserves praise. He may not have the technical ability Camoranesi has, but he's starting to display his Parma form. His crosses are dangerous, and I love that he varies them. Sometimes low, sometimes far-post, sometimes cuts back behind the defense. Crossing for the big man in the middle can often become predictable, but our both our wingers kept cutting their defense open.

In general Milan didn't play bad, as much as Juventus stepped up to the plate for the game. Nearly all our boys played quite well. Emerson, Zambrotta, and Janks were poor, but as a whole Milan played averagely, not atrociously.

Without further ado, I present you a more thorough match-report from mCalcio. [From mCalcio...]"Anti-Inter". A big phrase for Italian newspapers this week-end, as indeed Sunday's Juventus vs. AC Milan presented itself as a revealing showdwown. One to determine the Nerazzurri's real contender for the Scudetto race, one to decide historical bragging rights between two teams who, in the past two decades, have won more Serie A champions titles than any other team.

Well, at the end of a dramatically intense and exciting match the Bianconeri have claimed those rights, and thus kept within distance of the Inter "enemy". On Sunday, the Old Lady won thanks to their playing rhythm, the youthful strength of Marchisio, Sissoko and De Ceglie, but also thanks to the exceptional attacking prowess of the Del Piero-Amauri tandem, a tremendous combination of class and power. Milan displayed some pride and quality, but they lacked physical and playing continuity. It was a night in which the absences of Kaká and Gattuso felt very heavy indeed.

Note: I am still without my computer. Right now I can only post through an old Compaq 900 laptop from the pre-war era. For Juve-AC Milan though, some sacrifices have to made. ;)

Tactically, as mentioned, Carlo Ancelotti had a real head-scratcher to deal with in the absences of Kaká and Gattuso. To make matters worse, Mathieu Flamini, the de-facto replacement of the gnarly Italian defensive mid, was also unavailable, which forced the AC Milan coach to put his faith in Emerson. Not exactly an equal-quality exchange, as we will see later. Up front, Seedorf and Ronaldinho supported the lone striker Alexandre Pato. On the other end, Ranieri fielded his usual 4-4-2 wing-attack formation, with Camoranesi (still unavailable) replaced by Marchionni on the right wing, and the in-form pair Del Piero-Amauri in attack.

Right from the get-go (and much to the spectators' delight), the match was an open contest. Juve set out at a furious pace, characterizing the Bianconeri's excellent first half; their strong fitness & physical level seriously troubled Milan, who really struggled to keep up. To think that out of the two teams, the one with the mid-week European action had been Juventus (Milan had the week off in the UEFA Cup) seemed almost unreal.

The first goal arrived just 15 minutes into the game: Molinaro made a low pass for Alessandro Del Piero, who was upended inside the box by Jankulovski. While doubts regarding the call were cleared very fast with video replays, it must be said the Juve captain was offside when the pass was made. Regardless, with a powerful kick from the spot Ale scored his 251st goal for Juve, his 5th in Serie A and 10th of the season. 1-0 Juventus. Milan's response was immediate. After two big scares for Manninger (an Ambrosini unbelievable point-blank header miss, and a Pirlo venomous free-kick parried by the goalkeeper), the equalizing goal bore the signature of Alexandre Pato, receiving a pinpoint pass from the left bt Ronaldinho. 1-1.

Psychologically, the Bianconeri could have justifiably slowed down, also because in the meantime they had lost Nedved through injury (his replacement, Paolo De Ceglie, proved to be more than adequate). Instead, Juventus threw themselves forward, with powerful figures like Sissoko in the middle and Chiellini at the back. And proceeded to take the lead again. A corner from the left by Del Piero found the noggin of an unmarked Giorgio Chiellini (Ambrosini and Emerson were out catching butterflies in the meantime) and it was 2-0 Juventus.

But the Bianconeri weren't quite finished yet. De Ceglie took off on the left wing (once again, forgotten by Emerson), sent in a measured cross which Amauri converted into a powerful 3-1 header. Juve was looking to run riot, getting close to a fourth with Marchisio (shot wide after a wild penetration forward).

At half-time and after 47 entertaining minutes the score was 3-1. Milan had not played badly, but certainly paid the price for their slower pace: a clumsy defence (especially on defending set-pieces, but what else is new) and the absences of Gattuso/Flamini/Kaka were sorely felt, while on the other end the Bianconeri's wing-attacks had been devastating (Marchionni was playing sharply and De Ceglie had immediately made an impact after his entrance). Thus, Ancelotti had to make some changes for the second half, Milan needed to bolster their attack: out with the almost invisible Emerson, in with Andriy Shevchenko (another phantom of sorts as it would turn out, but I digress). And so, after a lot of huffing and puffing Milan did manage to get one back, when a good passing combination in the center was finalized with a long-range drive by Massimo Ambrosini. The double deflection of Marchionni and Chiellini deceived Manniger, and it was 3-2: game on again. To think that just a few minutes earlier Sissoko, Marchionni and Marchisio had tried very dangerous long range strikes just narrowly missing the target.

Milan fancied their chances now, and attacked en masse. The Rossoneri's enthusiasm was short-lived however, because on yet another one of his wild runs forward De Ceglie got free of Zambrotta on the left, forcing the Milan right-back to bring him down. Second yellow and early shower for the ex-Juve player.

Everything changed. Juve got their strength and morale back, Ancelotti gambled on playing with a 3-man backline. Amauri punished him. Exchanging passes with Sissoko on the edge of the box, the Brazilian forward got rid of his marker and beat Abbiati with an acrobatic left-footed instep. A stylish goal for a stylish victory, 4-2 Juventus. Before the match ended, the Bianconeri could have even scored two more through Del Piero (hitting the woodwork after a lovely fake) and Iaquinta (blasting wide from 6 yards out). The Inter chase is on.