Or so Lapo Elkann says. But he's also known for dabbling in coke and trannies...so take his word for what it's worth. 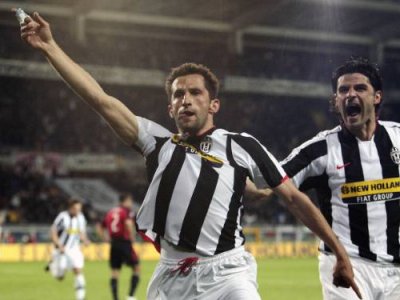 Last spring of course was a game we'll never forget. Exciting, open, terribly nerve-wracking, and a brace from Brazzo. Fanfreakingtastic. But it's a new day. As you may have noticed from the Milan Offside, this is a collaborative preview between Gianfranco and myself. An interesting way to look at it, other tifosi always consider your situation differently than yourself, so it's a good read. We may even do an after-words Q&A! Who knows.
One of the aspects I was really looking forward to this game was Poulsen v. Gattuso/Kaka. The three look set to all miss the match. Poulsen and Totti both missed Juventus-Roma. I guess it's some kind of odd universe karma thing. I hope he gets to face off with them this Spring! Enjoy the preview, ragazzi.

General thoughts on the opposite team?
Alessio: Milan happens to have two of my favorite non-Juventini in the world, Pirlo and Maldini. Both are absolutely tremendous players, when on, they are some of the best in history at their position. Last year there was a lot of mention about how Milan's squad was virtually the same as the last time we faced off, whereas obviously the Bianconeri have made radical changes. I think Dinho and Sheva were the wrong signings.....they are just going to crowd out Borriello and Pato. Amauri would have been perfect for Milan, although he would have certainly been the replacement for Borriello. If Milan do sign Thiago Silva it's a good move. It's a shame Milan only signs Brazilians now, but so it goes. Their backline needs to be refreshed badly. Maldini, Favalli, and Nesta are on their last legs, and Kaladze, Zambrotta, and Jankulovski aren't exactly young.
Gianfranco: There are few teams and coaches that I respect more in all of Italy than Juventus and Ranieri. Ranieri has always been an intriguing character and what I considered to be a very good judge of talent. For all the credit Jose Mourinho got in his first year at Chelsea, what people forgot to mention was that Ranieri built the foundation of the team that Jose made so famous. Forget the tinkerman for a moment, my respect for Juventus stems on their consistent policy for years and years to groom young Italian players for the National team while giving a home to top notch Italian players as well. This was a formula that Milan was known as for well, but have currently lost their way choosing to feed the Brazilian National team instead. Despite Juventus’s struggles early in the season the team has galvanized and are to be considered a threat and challenger to the scudetto.

What do you like about the other team?
Alessio: They treat their stars well. People might bitch about letting Serginho, Cafu, and the thousand other Milanistas stay too long, but Juve has had a pretty shitty history of prematurely cutting legends careers. They have a superb European record, and a lot of strong traditions.
Gianfranco: Commitment to young Italian players and Italian players in general, their choice to sell Nocerino was a puzzling, but their commitment to players like Giovinco, Chiellini, Marchionni, and Molinaro is envious for any Italian.

What do you not like about the other team?
Alessio: Had they signed Amauri instead of Borriello, their entire attack would be Brazilian. Seriously guys, chill out the jungle fever.
Gianfranco: Nedved. I can’t quite put my finger on why I don’t like him but it is probably a menagerie of reasons.

If you could have one player from the other team, who would it be?
Alessio: Pirlo. No more attempts to find a regista.
Gianfranco: Chiellini, we need defense bad and he is potential beast, I would even take Legrottaglia.

Who is your least favorite player on the other team?
Alessio: Zambrotta? Emerson? I don't really hate anyone on Milan. Except maybe them.
Gianfranco: Nedved here again, again I can’t explain it, maybe it is the hair.

Opponent Scudetto or Inter?
Alessio: Milan, anyday.
Gianfranco: No matter scudetto’s for Inter they are to close as it is!

What is your team's lineup?
Alessio: 4-4-2 is without question. There are a few selection questions though. Is Camo prepared to start? He dislocated his shoulder a few weeks ago, initially we thought he'd be out till 2009 but he's been trying to get ready for this game. He didn't play against BATE, so we'll see. Legrottaglie is suspended, so Mellberg got a run out on Wednesday to get him somewhat prepared. Center-mid is the last question. Sissoko was suspended for the game against BATE, now he has the flu. He's been given the next two days off, but could make it. Zanetti surprisingly played a full 90 in his place, but he's coming off 4-5 months of injury and looked rusty. Ranieri did well to rest Chiellini, ADP and Amauri on Wednesday, but I could not understand why Nedved played nearly the full game.
Juventus: (4-4-2) Manninger; Grygera, Mellberg, Chiellini, Molinaro; Marchionni, Sissoko, Marchisio, Nedved; ADP, Amauri

Gianfranco: It is looking more and more like the XMAS tree will continue to haunt us.
But at least Carletto will have the services of Seedorf and Ambrosini to help offset the loss of Rino. Kaka and Dinho will continue to play behind the striker, most likely Pato, but I no longer have faith that this attacking trident has the side needed to get dirty and win the match which puts an enormous amount of pressure of on Seedorf, Pirlo and Ambro to play more defense, or have a more defense mindset which is not good. The match against Inter earlier in the season, saw a stellar performance from Seedorf but also a strong defensive performance on the flanks from Ambro and Gattuso, who will be missed for his bite in the middle of the park.

How's the team's form?
Alessio: Pretty good. We've won the last 9 Serie A games in a row or so, barring the slip up at Milan's bastard cousins Inter. Goalless draws against BATE and Zenit, but we finished 1st in the group. This is a good time to face Milan, if only we were a bit more rested.
Gianfranco: Couldn’t pick a worser time to face Juventus. The injury list is a mess, and the team has lost that rhythm and form that they had earlier in the season. However, this team is always capable of the big match when they are facing a big opponent, and there is no one bigger right now in the Serie A.

MOTM?
Alessio: ADP. He might not get on the scoresheet, but he's in sensational form right now. When he came on for Amauri on Wednesday, Juve looked a lot more threatening.
Gianfranco: Pirlo. There was a time when this team didn’t function without this man, granted the loss of dependence on him is welcome because it gives him a chance to get some rest and find his form. He needs to reclaim his place as the creative engine on this team, and there is no better stage to do it than this match.

Predicted score? Scorers?
Alessio: 2-1 to the Bianconeri. Amauri to get on the score sheet...and a defender. Maybe Chiellini or Mellberg on a set piece.
Gianfranco: We all know I hate to predict scores, to many factors and so on governing the match. Quite honestly I sense a draw here, but set pieces specifically free kicks, will play huge a role. If you like set pieces this game is a treat ADP, Pirlo, and Dinho all ready to strike the dead ball for the back of the net.