The Zebras v. the Flying Asses; a preview

Share All sharing options for: The Zebras v. the Flying Asses; a preview

The Juve machine keeps on rolling. The stunning double over Madrid capped a furious two-week reJUVEination, in which we have won 5 straight, something we haven't done in about three years. We travel to Chievo, in a game that worries me more than the Madrid game. Our team always brings its' A game to big games, but this isn't a big game, or at least not conventionally. We're facing an uncertain team who recently replaced their coach.

I'll be honest, I haven't watched too much Chievo, but they are pretty awful. Make no mistake, this isn't the miracle team of a few years ago. In 10 games, they've conceded 16. Pretty dreadful. Only Bologna, Roma, and Reggina have conceded more. They also have the worst scoring record in the league, with a grand total of 6 goals in 10 matches, just behind Sampdoria. The good news for Chievo is while their home form is generally crap, it's not as bad as their away form which is just plain Derby County-ish. They've recently replaced their coach with Di Carlo, who I've never believed in. Sure, he beat Juve in Serie B, but his Parma woefully underperformed last year. That team easily should have avoided relegation, yet they got dumped down. Odds on Chievo getting relegated? Pretty good.

The bookies are siding with Juve on this one, I always think bettings sites are a much better prediction than "expert opinions," it's essentially a prediction market except people certainly believe what they vote, as they have a monetary stake in it. Odds to Chievo winning? 6. Odds to a draw? 3.45. Odds on Juve winning? 1.55. (By the way if you want a risky but lucrative bet, Udinese is at 7 to beat Inter, and a draw is 3.45. Seems a bit overconfident for a struggling Inter against a high-flying Udinese) The momentum is with us.

Injuries-
Juventus: The usual suspects; Andrade, Buffon, Trezeguet, Zebina, Cristiano Zanetti, etc. Skipping the trip also are Brazzo, Marchisio, and Nedved. (presumably for rest, as he's played too much recently) De Ceglie, Grygera, and Camoranesi make the trip. Called up from the youth team: Fausto Rossi, Giuseppe Giovinco (that's right non-Juventini, there's another on the way), and goalkeeper Nocchi. The good news is in Buffon and Trez's absences, Manninger and Amauri have proved they can deputize well. Manninger was one of the smartest buys from Secco this summer.
Who Plays: Most of our team has played too much recently, so who will be rested? It's unsure. Mellberg will probably cover for Grygera again after a solid game and as Grygera isn't totally healthy. Marchionni has been playing a ton straight off an injury but will probably still start ahead of Camoranesi. Tiago will continue to slot into center-mid after a few good performances, and perhaps more importantly, a lack of other options. Molinaro might be rested for De Ceglie, but I'm not sure. Giovinco is likely to take Nedved's spot, something a lot of Juventini have been looking forward to. (Giovinco starting, not Nedved disappearing) Ranieri hinted Amauri might be rested as he's played a lot recently, well so has Del Piero, so I'm not sure what's going on there. Iaquinta should get a start though.
Predicted lineup: (4-4-2-) Manninger; Mellberg, Legrottaglie, Chiellini, Molinaro; Marchionni, Sissoko, Tiago, Giovinco; Iaquinta, Amauri
Recent Serie A form; (LLWWW) 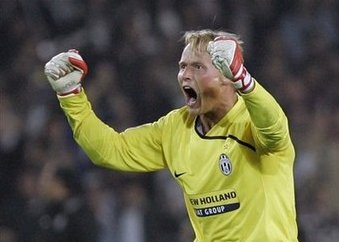 Chievo: Not a cluj. Like I said, I haven't really caught any of their games recently. I do know they have Kerlon, the wunderkid of Youtube, but he hasn't played. They have Sebastian Frey's younger brother Nicholas Frey, who according to Wikipedia plays defensive midfield. Secco's probably out to sign him already. Check out the Chievo blog for more.
Predicted lineup, unabashedly stolen from Channel 4: (4-3-1-2) Sorrentino; Frey, Mandelli, Yepes, Mantovani; Luciano, Pinzi, Bentivoglio; Marcolini; Bogdani, Pellissier
Recent Serie A form; (LDLLL)

Key battles-
Big Game Juve v. Complacency: We're undeniably a force to be feared in large games, but we dropped too many points against relegation-contenders alla Roma last year. After a shaky start to the season, will we continue to do so?
Juventus v. Fatigue: With the exception of Giovinco and Iaquinta, all of our players have played probably 4,500 minutes in the last few matches. Everyone must be gassed a bit, let's hope it doesn't show.
Dr. Tiago and Mr. Molinaro v. Dr. Molinaro and Mr Tiago: These guys have been dreadful for most of last year, but are showing very good form the last few weeks. Will the bad ones show?
Juve attack v. crappy Chievo defense: We're gonna score at least one goal, no matter the result. You can bet on it.

Predicted result: Well, 2-0 seems to be doing it for the Bianconeri recently. I don't think we're going to concede, and two goals seems like a fair request. 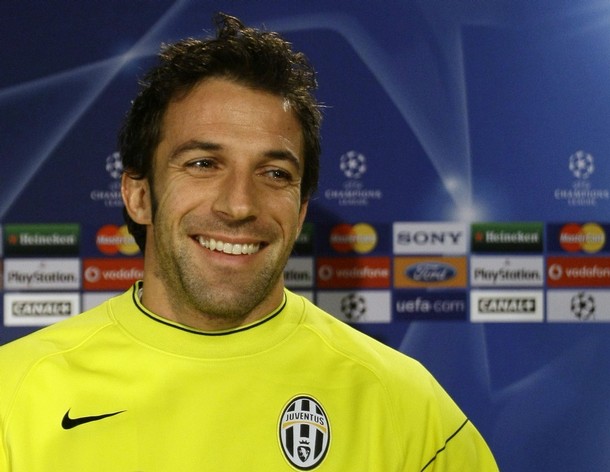 Tomorrow is il Capitano's birthday, turning a ripe age of 34. Quote from Channel4- "Alessandro Del Piero (Juventus) – A crisis awaits the Bianconeri. What will they do when Del Piero finally hangs up his boots? No other player drags a team up by the scruff of its neck like Del Piero whose goals against Real Madrid and Roma have resurrected Juventus’ season." The thought of a Juventus squad without Alex seems completely alien to me. Why is he so great? One of the reasons is his unbelievable loyalty. Unlike Maldini and Totti, his position has never been assured at the club. After his catastrophic injury, he was in poor form for years. Capello benched him for nearly two years in favor of an Ibra-Trez front attack, and Iaquinta forced him to the bench for 6 weeks last season. When it was announced that Juve was demoted to Serie B, Alex was the first to come out and unequivocally say, I am staying. What a legend.

Liveblog? I had a study abroad meeting at 8am this morning so I didn't go out last night. The game is tomorrow at 830am local time for me, anotherwords, hell no. I'll catch it on replay though. As always...forza Juve, vinci per noi!!