Reggina's head is so big right now they'll barely fit into the stadium tonight. Coming off of two straight wins, one agianst Atalanta and the other against Udinese, the Amaranto come into this one brimming with confidence... who said eleven game losing streak? Another notably confident lad is our very own Cristian Molinaro. No doubt he'll have trouble fitting his fat ass into the Olimpico tonight after he signed an offer to extend his stay in Torino 'til 2013. I'm gonna go jump off a bridge, anyone want to join? 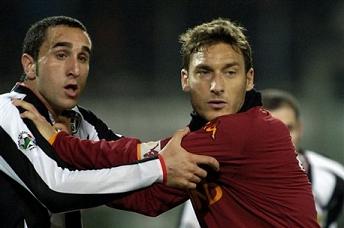 What a way to get a handle on the situation

Molinaro I'm kidding, I think you're a great asset to this club. Many of us tifosi bianconeri just want to see you use your skill set a little more effectively that's all. You must be familiar with our sponsor New Holland. Well Cristian you'll be exicted to know it's Fiat's farming/argicultural division- you remember that big red tractor you used to play with when you were a kid don't you? Well have I got a job for you...

Do you think he bought it? Well it's too late now. He probably found himself some trophy football wife and put a down payment on a flat somewhere in downtown Torino already. I wish I could say this newfound self-confidence of his will go along way towards improving his game (on the pitch), but I can't and I'm not going to go over it again here. He's not of Juventus calibre, that's that.

Moving on, tonight's game against Reggina is where our focus should lie. Ranieri's been doing his weekly dance about not underestimating our opponents and our opponents have been dancing about warning against underestimation. The truth is Reggina must fall. We need to turn the heat up on the leaders with Inter and Milan going up against Napoli and Palermo respectively.

"Talk is cheap in football and the Tifosi will become increasingly frustrated if Legro's prediction fails to stand up. The problem lies up front. There was no creativity or incisiveness against the Nerazzurri or the UEFA Cup holders midweek. Amauri looked too static rather than live at San Siro, while Del Piero stumbled, perhaps the lack of rest being afforded to the captain is starting to catch up.

Sebastian Giovinco is still rotting away on the bench and that is unlikely to change against Reggina. The Bianconeri are favourites heading into the game and they will be hoping the two game drought up front will change. Amauri has only scored six goals in 13 Serie A games and, for someone who cost €24million, that will be regarded as not good enough at Vinovo.

The problem for Reggina has been at the back. Their defence is by no means water tight with 24 goals being shipped in 13 games, meaning they have the worst defensive record in the league. That shouldn't matter too much though as Juve have drawn blanks in their last two matches."

Drawn blanks? Who are we... Moratti? Look, if Goal.com's assertion is to stand then it would suggest that the key to victory will lie in the midfield. If Camoranesi and Marchisio continue to have their way, you can expect our offense to leave very a different taste in your mouth this time around. Enjoy the match ragazzi.