Share All sharing options for: Juventus v. Roma; Battle of the Infirmaries 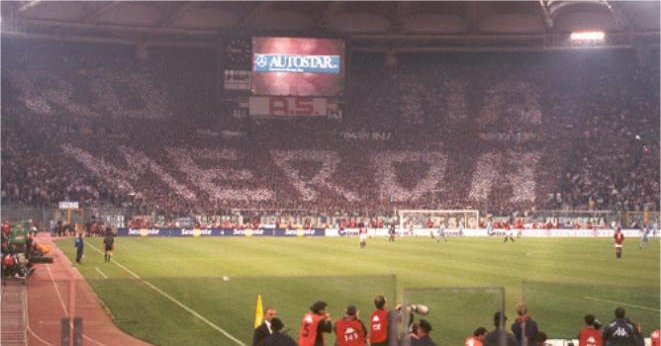 Thanks to the Laziale for this photo....and again, thanks for Pavel.

The big games don't stop coming, do they. After facing Napoli, Madrid, the Toro, we welcome Roma to Torino, and then an away trip to the Bernabeu mid-week. Tricky stuff. Roma's been having a shit season like us (up until our chicken soup) and sit 1 point above the relegation zone a quarter through the season, can't make that up. If we win today, Roma can more or less kiss their Scudetto hopes completely goodbye and start focusing on beating out someone (Napoli? Fiorentina? Lazio? Udinese?) for that lucrative 4th spot in the Champion's League.

Despite Roma finishing ahead of us last season, we've just been kicking their asses recently. We defeated them in Turin last March 1-0, thanks to a stunning Del Piero free kick. In the andata, we pulled a very credible 2-2 draw in Rome in the 5th game after our return from Serie B. Roma seethed at the ref handing us a throw-in deep into Giallarosso territory, conveniently ignoring the offside goal from Totti where he also fouled Criscito in the buildup. And then there was the wonderful 5-2 preseason hammering. In 2005-2006, we drew 1-1 at home and crushed them 4-1 in Rome. So we've got a pretty good streak going against the Ballacks of club football.

Medical Situation:
Juventus- Juventus.com released their injury report a few days ago, and for once, it's good news. Legrottaglie, Del Piero, Grygera, and Camoranesi are fit for the game against Roma. (Though Camoranesi shouldn't play more than 45minutes) De Ceglie, Zebina, Brazzo, Poulsen and Zanetti all will be coming back within 2 weeks or so. And most impressive to me, Marchionni has played 4 games in a row without picking up an injury.

Roma- Chris of Roma Offside fame has a pretty extensive list here. Basically yes Mexes, yes Vucinic, no Totti, no Aquilani, no Montella, Baptista in crappy shape. So, kind of like us except they don't have very good backups. An 18-year old, one of the many "Next Zizous," etc.

Predicted Juventus lineup: (4-4-2) Manninger; Molinaro, Legrottaglie, Chiellini, Grygera; Nedved, Sissoko, TIAGO, Marchionni; Amauri, Del Piero
Tiago started last week despite not having played in ages and coming off an injury, and was pretty good. I'd love to have Nedved replace him at CM, but our two backup LWs (De Ceglie, Brazzo) are both injured. He could give a surprise start to Giovinco in midfield over Tiago, but I'm not sure. I'd like to see Iaquinta and Camoranesi come on around 65' to relieve Amauri and Marchionni who have both been playing too much recently. 3rd sub depends on how the game is going, I suppose, but we don't have too many options on the bench.

Key Battles:
Amauri v. Healthy Roma Backline- Amauri. The dude is unstoppable right now. Mexes, Panucci, and whoever is playing fullback for Roma out of their 3,000 available can be decent defenders on a good day. But Amauri's aerial ability, dribbling skills, shots....he's gonna bag a goal.
Manninger v. Doni- Push. Manninger is just as good of a keeper as Doni. Let's hope Alex can cut out some of the shaky moments though.
Doni v. himself- Who knows. His keeping on Ibra's goal in the 4-0 stomping was horrible, just horrible. Reminded me of the time Ricken lobbed Peruzzi in the CL final. What the hell was he thinking standing out there?
Mexes v. Nedved- Nedved. Mexes is coming off a 3-game suspension. Nedved is coming off a match-winning brace. Nedved is a Ballon d'Or winner. Mexes can't hold his temper. I find the whole Mexes v. Nedved grudge thing hilarious...it's like Bruce Arena starting a spat with Ferguson. Your feelings on the matter are irrelevent, they are just in two different leagues.
Whoever-is-in-Roma's-attack-now v. finally healthy Juventus backline- Juventus. Last season, when Andrade snapped his knee and with Tiago started Juve's new policy RomaChris laughed at Juve and said we'd fight to get into the Uefa cup. Our defenders are stronger together than by themselves. Grygera has been one of the most reliable right-backs since adjusting to Serie A, Legro-Chiellini have been a fearsome center-duo, and Molinaro, well, he's coming off an awful game, and two surprisingly good ones. X-factor as always. This is the first time we have our starting defense together in ages. Baptista's never convinced me, Vucinic can be terrific when in form (he's not right now, hope he doesn't for the match), Taddei has always been a very average winger...doesn't bother me too much.
The Battle of the Midfield- Push. De Rossi is a class above our midfielders, and Aquilani is well, made of crystal. David Pizarro is better than Romanistas give him credit for but he's still rubbish. Tiago-Sissoko is alright, but we're missing 2 starters in midfield. Sissoko will have his work cut out for him. Tiago will either flop again or do surprisingly well, depends on how possession goes I suppose.
Champion's League Del Piero v. Serie A Del Piero: CL ADP- He's been good in Serie A, but not phenomenal and hasn't been banging in too many goals. I expect him to have a good game but not sensational. Who knows, Del Boy lives for big games though, so maybe he'll net a goal.

Predicted result: 2-1 to the Bianconeri. Amauri and Chiellini for Juve. Vucinic for Roma. Good chance of a clean sheet for Juve though.

Liveblog? Perhaps. Halloween is a big deal down in New Orleans, on the "Bourbon Street for locals" aka Frenchman street. I'm actually headed out in a hour or so....we'll see how recovered I am.