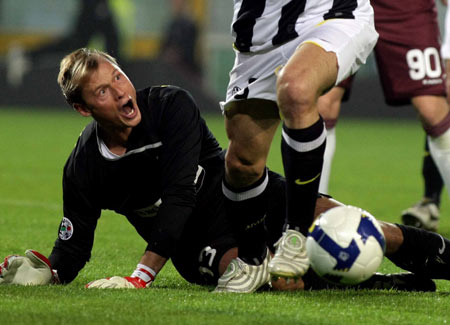 Let's face it, the Serie A this year is the most competitive first division in the world, and to stay atop the table week after week is something to behold. With that in mind, if we cannot assert our title ambitions with a win here against an ailing relegation contender, then I'd have to seriously rethink our chances of winning the Scudetto. Am I being a bit over-dramatic? Maybe. But we poured our hearts on the field against Real Madrid and fought to protect our lead against Torino, so I'll run away from home if we lose to the Rossoblu. I swear.

Juventus, it's time to start doing the business. I'm salivating at the mouth to get our campaign off the ground and I won't settle for anything less than three points here. The win against Torino was vital, but this one against Bologna is central to our goal of consistency. We need to get strong at home and away and we need to start now.

Bologna are heading into this one with the best track record of failure I've ever seen against us. They've never defeated us in almost ten years.That's ten long, cold, and lonely years if you're a Rossoblu, right Ben?. If I was a betting man (which I ain't cause all my money goes to booze) I'd bet that we'd come away with the victory. Yet, Bologna did manage to upset Milan and Lazio this year, so maybe I wouldn't bet the house and the kid's college tuitions.

Claudio will be without the services of Del Piero and Legrottaglie as (you guessed it) both players are recovering from minor muscular strains similar to De Ceglie's. Camoranesi and Tiago are sitting on the bench "available" to Ranieri if need be, but it's obvious he'll want to avoid using them if possible as five primavera players were called up. Ideally I'd love to see us put this one out of Bologna's reach early so our youngsters can have a run, but if that doesn't happen I'll be happy with the win all the same.

At the other end, head coach Daniele Arrigoni is the one in the hot seat as it's being widely speculated that a loss could mean the end of his tenure with Bologna. Unfortunately for him he's gonna have to do without the services of his leading man Sergio Volpi, as the midfielder picked up an injury last weekend. In response to this setback Arrigoni said, "We will have two central midfielders who will dictate the play. We will have less passes but more strength". Sounds eerily familiar doesn't it?