Amidst the tragedy of two Juventus supporters who lost their lives in a horrible bus crash just hours before kick-off, our Bianconeri took to the field later that evening for what will only be described as a pivotal point in our season thus far. With just two points in four Serie A matches heading into that gigantic club clash, Ranieri had probably wished the night before in bed that it was only a question of correcting poor form. But even despite the lengthy list of absentees, the Tinkerman’s men played with strength and pride; a fitting testament to the magic that is and always will be Juventus. 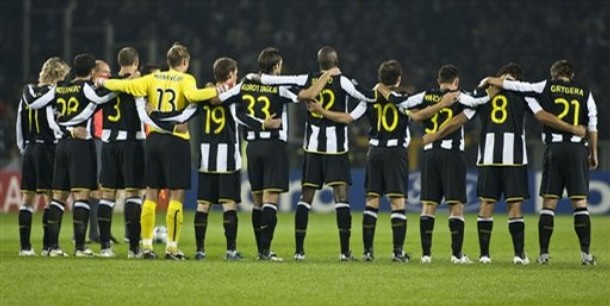 First though, credit must be given where credit is due. Real Madrid played one heck of a game. The way they stretched the field in the second-half with annoying accuracy would’ve frustrated opponents protecting an even larger goal margin. In addition to the Spaniards enjoying 64 % of ball possession including a Sneijder effort that had everyone beat but the post, the patience of many Juventini disappeared as Ruud was left shamefully wide open to pull his club back within one.

I'm not gonna lie, for a while there I was freaking out. Images of Molinaro tripping over his feet trying to catch Robben or Drenthe from behind looped over and over in my mind. I'm telling you, football is the beautiful game but it can give you the runs sometimes. To my surprise though, Molinaro had a solid game. He linked up nicely down field several times with Pavel and Del Piero, and shouldn't be blamed for the visitor's goal as he was stuck between guarding two men. Speaking of Pavel and Del Piero, they each had fantastic showings themselves. The Czechs hair never looked so good as he controlled our centre midfield with good enthusiasm. We'll see if he's got enough left in the tank for Torino.

From a tactical perspective, Ranieri was pleased that they had played Madrid effectively. "We were fortunate to take the lead early on and could therefore contain Real Madrid and focus on the counter". True, the counter is a solid strategy, but looking back in that situation we were way too quick to take our foot off the gas pedal. We went from an all out blitz to knock Madrid off of their game, to a box-defence in our own half with forty minutes left to play in the first. Against a side like that, I think that's asking for trouble. Why not work 'em a little longer? We were playing some really good footy, first stringers or not.

“Are we cured? No, I think we’re still not back to our best, although that was some great chicken soup,” said Buffon. Chicken soup... it's so simple it's brilliant.