Camoranesi's Shaky Again, So What About Marchionni?

Share All sharing options for: Camoranesi's Shaky Again, So What About Marchionni? 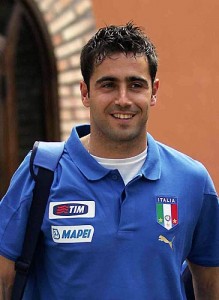 I know what you're thinking and I agree, no one can replace Mauro. His game, like his skin, is just too well-oiled. But given our current circumstances, we gotta begin to ask ourselves: who can fill these roles the best? The answers to those questions my friends become harder to find once we try and piece together strategies and formations. However, after a few minutes of reflection, I began to imagine who our best option would be in place of our most valued asset. That led me to believe that there could be more than meets the eye with our own Marco Marchionni, and perhaps this year his contribution to our club could supersede that of anyone else.

Back in 2007-2008, we practically didn't see him. He managed to start only one game and was featured in a grand total of eleven matches, scoring one (cheeky) goal. But before his own injury spell, Marco had been playing some inspiring 'play-making' footy. Under Prandelli at Parma, Marco began his push for the Italian national squad earning his first cap against Poland on November 12th, 2003 after a ton of notable showings that season. Moving forward, after two more successful seasons in Serie A, Marchionni joined the Bianconeri on a free transfer during our year in hell Serie B where his performances again garnered him his 3rd cap in September 2006.

This season though Marco's been working hard in the gym, eating his Wheaties, and going to bed early each night to erase those injury memories of the past- I just know it. When he's on form this man really stands out in a crowd let's put it that way. A natural right winger, perfect for Camoranesi's position, Marchionni seems to possess the same skill set that made Juventus' 4-4-2 formation last year so potent.

Although not blessed with great hair, Marco has a serious case of dribbling ability. In a few moments of brilliance/health last season, Marco had made some incredible cuts into the heart of defences. He knows how to play wide, and likes to push up field which makes him well suited for right wing in Ranieri's defensive centre-midfield puzzle. Marchionni also looks pretty comfortable at taking on a man or two with his moves (did that sound dirty?) which is a must, and his crosses/corner-kicks (from what I've seen in preseason) suggest that he's back into the swing of things. All things considered, his style of play could be our easiest solution during Camoranesi's absences... if he himself stays healthy that is.