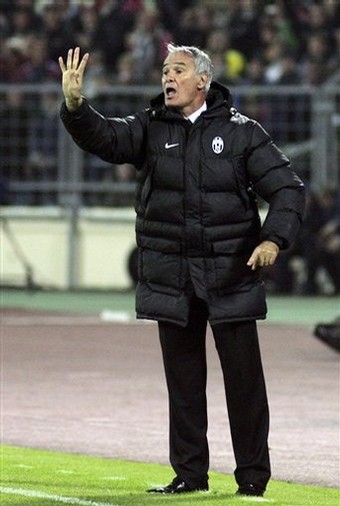 I don't know who to blame for the draw today. I think it'd be wrong to blame Ranieri, and Secco doesn't deserve criticism either, no one could have predicted the insane injury crisis would hit us this early in the season. Overall I think this has to be the players, they just didn't show any real desire to win the game today. Anyways, here are a few of my comments and then a more-indepth review of the match courtesy of Marco over at mCalcio.

The Good:
Giovinco: No doubt he was the star of the show, with two great assists to Iaquinta to draw the game. But what I can't understand is why he hasn't really shown us the dribbling yet? At Empoli he was constantly taking men on one-on-one, and while he's had some great touches we haven't really seen him take on anyone yet. I wonder if he's worried about losing possession too much.
Pavel Nedved: He's 36 and he played a full 90, only a few days after playing a full 90, and he looked solid out there. No, of course he's not the Nedved of 2003 but at this rate I don't see why he couldn't continue another year.
Iaquinta: I'll quote Goal.com's editorial on this one- "Usually criticised for not being clinical, tonight he had two chances and finished both with aplomb." He hadn't scored a goal yet in the campaign but got on the scoreboard and crucially so.
Bate: We didn't play bad today, although we didn't play good, but Bate played great. They took us on with no fear, attacking well and scored two solid goals. Here's to hoping they can take some points off of Zenit.
Ranieri: I know this won't be a popular choice, as Ranieri's approval among most Juventini is pretty low these days (except for me, as most of you know) but I thought he put out a great formation today. He pulled Camoranesi when he was tired and it became obvious our center-midfield needed an injection of energy, and gave Giovinco, Marchisio, and De Ceglie plenty of playing time out there. Against Sampdoria I thought things were a little off but I think he got it right today, so I don't know what we're missing.

The Mediocre:
De Ceglie: I won't blame him entirely for the goal, but he should have been marking his man on the 2nd goal.
Chiellini: Similar to De Ceglie, he made another uncharacteristic error on the first goal. Gorgeous through ball, though. I wonder if he's not fully fit from his injury, because he's been a little more error prone recently than normal.
Camoranesi: Very little magic from our midfield maestro today. He's done great playing more centrally before but it just didn't seem to be happening, rightfully substituted at the half.

The Bad:
Defense: It felt like watching the Galacticos back there. All good players, but there seemed to be very little command or coordination. Without Buffon organizing the defense, someone has to step up. Manninger, maybe, but I think Chiellini needed to assert his leadership on the pitch.
Juventus: We're not playing particularly awful, not great either, but something's just missing from our team. 3 draws in a row is not a particularly envious record. I miss Trezeguet already. Frustrating. 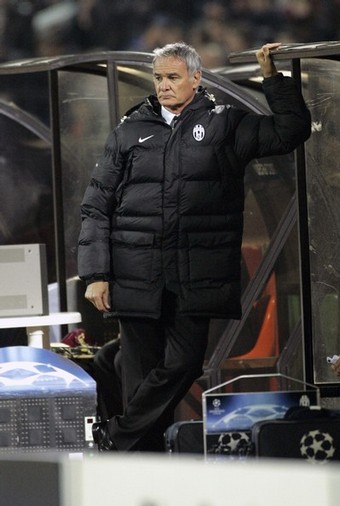 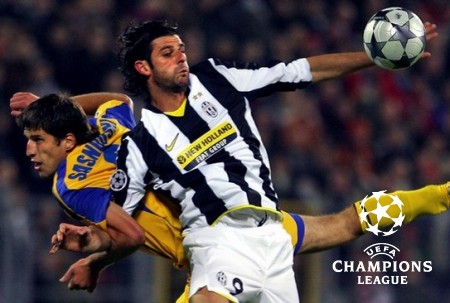 [From mCalcio.com...] After Catania and Sampdoria in Serie A, Juventus obtained their third consecutive draw in less than a week, this time in the UEFA Champions League. And don't be fooled by the name: if drawing against Bate Borisov (a Belarusian team at its European top competition debut) might seem like a bad result on paper, the Bianconeri can actually be quite thankful for the point they obtained in Minsk today.

Indeed, his team's apocalyptic initial 30 minutes (Juve were down by two goals in the 23th) could have very well cost Claudio Ranieri his first defeat of the season, but fortunately Juventus's reputation as the "team that never gives up" isn't for nothing. Grabbing the match by the gonads, the Bianconeri held their head up high and managed to grab the equalizer before half-time, courtesy of two tallies by Vincenzo Iaquinta. Scary times in Minsk these days... must be the cold. 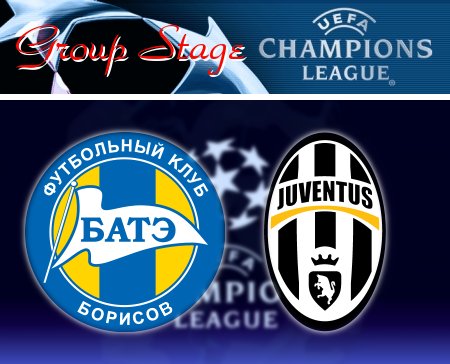 Juventus started this match, quite litterally, "horror-style". Claudio Ranieri had decided to make a last-minute change to his "two-defensive-mids-wing-attack" formation, and inserted Sebastian Giovinco in lieu of Mauro Camoranesi (who moved to central midfield) on the right wing. What may seemingly have been a good move in terms of optimizing playmaking, actually turned out to be a logistics error of colossal proportions. The Bianconeri were spread too widely on the field, always outnumbered by their Bate opponents during ball possession, and without a defensive mid partner to aid him in the center, Momo Sissoko's recuperation duties heavily suffered.

FC Bate on the other hand, exhibiting a dynamic 4-5-1 formation (with active & motivated players on the wings), immediately took advantage of Juve's tactical problems. The first goal, arriving partly because of a Chiellini offside trap error and partly because of Legrottaglie's injury (he'd have to be replaced by Dario Knezevic), was just the tip of the iceberg-disaster yet to come. exploiting a Dmitri Likhtarovich through ball, Bate's nº10 Sergey Krivets escaped through on goal, dribbled past Manninger and deposited the ball into the empty net. 1-0 Bate. Juve supporters pinched themselves... were they dreaming?

Just 5 minutes later, the (bad) dream turned into a (horrible) nightmare, because the home team made it two. Cue assist nº2 for Likhtarovich, delivering a long cross from the left towards Igor Stasevich on the opposite post. Nedved (what was he doing defending?) missed the interception, and the Belarusian midfielder powered an accurate header towards the far post. Manninger didn't even move. 2-0 Bate. 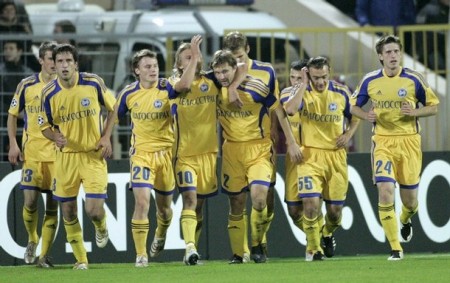 At this point, the psychological blow would have been too hard for an ordinary team to overcome. Not for Juve: it was time to put the "grinta" (fighting spirit) factor into the equation. Alex Del Piero sounded the charge (good free-kick attempt below the bar, saved by Veremko), shortly followed by Giovinco and Iaquinta: Super-Seba provided the passing, Vincenzo the finishing. First, a good cross by the Bianconeri youngster (receiving full marks for his first European performance tonight) found the header of the ex-Udinese striker. 2-1.

Fifteen minutes later, and in the last minute of stoppage time, Vincenzo made it two. Another good run and pass by Giovinco was well-finalized by Iaquinta, sending the ball between the keeper's legs to tie the game. 2-2. Juve supporters now breathing again. 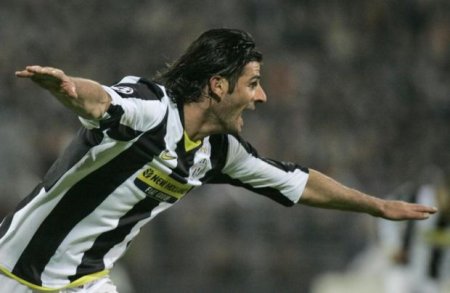 At the restart, Ranieri fixed the central midfield leak by replacing Camoranesi with Claudio Marchisio. Juventus turned to their usual wing-attack formation, coupled with the odd percussion of Sissoko (more and more reminiscent of Patrick Vieira) down the center, but it was still Bate giving Manninger scares. Such as in minute 55, when Aleksandr Volodko was litterally given a "rolling penalty-kick" opportunity, but incredibly ballooned his shot over the bar.

It was however the last scare of the night for the Bianconeri, who picked up the pace and took control of the proceedings. Del Piero's contribution growed exponentially, with the Juve captain coming close to the left (chipped acrobatic shot over the goalkeeper) and then the right post (diagonal left-footed effort after a 1-2 pass with Giovinco, wide). It was essentially the last highlight of the game, which even saw the appearance of Amauri (on for Iaquinta) in the final minutes.

In the end, as the Bate supporters celebrated their first point in the UEFA Champions League, Ranieri can be moderately satisfied with the outcome. Sure, Real Madrid went to beat FC Zenit 2-1 in the other game (and now count 6 points over Juve's 4 in the group), but there's still plenty of matches left in Group H. Huh? Just four you say? 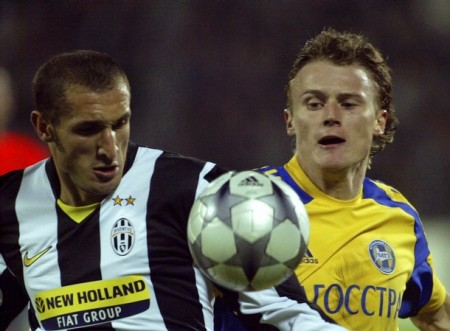