Get To Know Momo

Share All sharing options for: Get To Know Momo 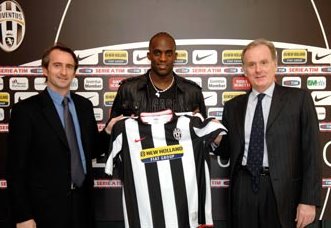 It's officially official! Momo Sissoko has been presented to the media and has taken his ceremonious photograph with Juventus' Managing Director Claude Jean-Blanc and President Coboli Gigli. However there wasn't much time to celebrate as the chartered private jet Juventus sent to pick up the Mali international two days ago in Ghana, returned Sissoko earlier today to join his team's effort against Didier Drogba's Ivory Coast in Group B action. The game has ended, and Mali are knocked out. But more importantly as I watched this match, I'm proud to announce that I have compiled the world's quickest scouting report.

Career Bio: He began his professional career as a striker for the French outfit Auxerre in 2002. After moving to Valencia in 2003 into hands of then manager Rafa Benitez, it was there where Momo made the switch from striker to midfielder and never looked back as the club went on to win La Liga that season. A year later in 2004, Valencia came under the ever watchful eye of our Claudio Ranieri as the Spanish side found much less success finishing seventh that season. However, Ranieri's love affair with Momo ended prematurely as after their first season together Sissoko decided to reunite with Rafa at Liverpool in 2005. For the next three seasons, Sissoko would enjoy his most success ever as he cemented his name as one of Europe's most promising midfielders. As luck would have it unfortunately, Momo's first team appearances became few and far between as an untimely career-threatening eye injury alongside a severely dislocated shoulder managed to stall both of his comback attempts. Never one to love and let leave, Ranieri's dream has come true as he's been reunited with Momo at Juventus for ever and ever, or until 2012.

Crazy atmosphere. These African fans are intense. A Mali supporter brought a bronze statue of an eagle to the game. Yes! I want a bronze Zebra now. In any case, for the first half Sissoko wasn't playing. The commentators, like myself, were shocked to see him absent from the starting eleven. However it was said to be believed that Mali's coach preferred to keep Momo on the bench because he believed Momo's mind wouldn't have been focused enough seeing as he had just arrived in from Turin earlier that day. Riiiight. So, as the Ivory Coast took the lead and went up 1-0 before the break off of a nice bit of Drogba skill, either that goal, or that bronze eagle, did enough to jog the Mali coach's memory as Sissoko was finally introduced in the second half.

Sissoko came on and provided Mali with an instant midfield advantage right from the get go. As expected, there was quite a bit of difference in skill between him and his team mates. He did nicely on the ball as his first few touches were pretty accurate. He then settled back in the middle of the field and supplied a handful of well-paced long passes to Mali's right wing efforts. Momo certainly looked every bit as determined to win possession and he was to maintain it. Problem was his team could never make anything more of it. As a result, the Elephants went up two more and earned a spot in the quarter-finals alongside Nigeria. What impressed me the most about Momo though was his remarkable athleticism on the ball. Almost unconventional and at times borderline suicidal for possession, but this game certainly showed hints of his very dynamic ability.

For those of you that have seen the game, I'd bet you'd be hard-pressed to find no similarities with Sissoko's performance and Ranieri's "holding midfielder" system here at Juventus. I know I'm goin against the grain a little with you guys but Momo is gonna do nicely as I think he'll make a better compliment with Cristiano Zanetti in the middle of the park. Being a little slower than Sissoko is ok with Cristiano as he can make up for his speed with his extremely accurate passing long or short. With Sissoko interchanging with Nocerino, you have the same or possibly even more fiery energy with more speed and greater passing consistency (i hope). At the very least, Momo will make for a solid option in our midfield. That said, I just can't see why he won't regain most of his promising form he enjoyed in the past with Liverpool. He is after all he's still very, very young.