Juventus Loses Out To Chelsea; Ivanovic Gets The Blues

Share All sharing options for: Juventus Loses Out To Chelsea; Ivanovic Gets The Blues 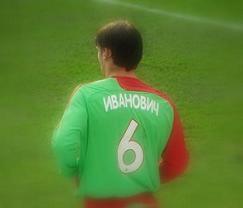 Juventus' chances of securing a solid collection of some of the finest defensive prospects took a couple steps back today as one of the Old Lady's oldest transfer targets has reportedly reached an agreement with the Blues. Can you really blame Chelsea? No, not at all. Terry I think got kicked in the head again, so with Abramovich's Eastern European ties and enough cold hard cash to satisfy any Russian capitalist's thirst for... whatever, Chelsea crooned Moscow Lokomotiv into letting 'Bane' go before his much anticipated summer departure for 13 million euros. Dammit!

So when I said our "Juve's chances of securing a solid collection of some of the finest defensive prospects took a couple steps back today", I meant it. Look it, aside from our veterans (more on that in a moment) we're good but not great. Keyser Giorgio at 23 will be the future of this team and Italy's National side no doubt, he's a monster. Molinaro at 24 has shown moments good lateral movement and I imagine he'll get better with more experience on the flank. However, he seems quite a lot like me in the sense that we've shown close to the best of our ability and lack that extra gear to superstardom if you will.

Domenico "Mimmo" Criscito
Criscito at 22 though has really impressed me. From what I've seen this season he has a ton of potential. Literally, a fucking ton of flat out potential. He's super calm in tight spaces, he has great positioning, and good technical ability too. However he just turned 22 four days ago and needs some solid playing time to progress so perhaps loaning him to Genoa might work out for him. There he'll be able to start, with Juve right now Ranieri won't field a defensive unit with more then two youngsters and it looks as though Chiellini and Molinaro are it (for the time being).

Just found this nice vid, thought i'd add it for Criscito you know

Remember when Totti picked his pocket earlier this season against Roma (2-2 final score), that wasn't Criscito's fault at all, he was just simply out-classed. All Criscito needs are reps reps reps reps reps and more reps. Not of the military press variety but of the playing time type. Take the loan to Genoa Criscito, you'll come back a starter guaranteed.

So on to our defensive veterans. We still need at least one world class defender. Stop talking about midfield transfers I'm sick of it, we need a pillar back there come this summer or kiss the Champions League Round of 16 goodbye! Before this afternoon I was as giddy as a school girl thinking of Keyser Giorgio or Ivanovic in the middle paired up with a summer blockbuster like Lampard with Brazzo and Molinaro or Zebina on the flanks. It seems now that I'll have to go back the drawing table as Lampard like Ivanovic will stay at Stamford Bridge for many years to come. :(