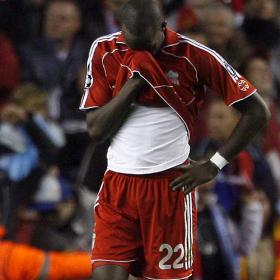 Fielding a starting eleven for this one was no easy task. Yet, you just knew with the atmosphere being what it has always been when these two teams get together, those who got the nod for either squad would be playing some spirited football. Or at least thats what Ranieri was hoping for as he had received notice prior to the game that Buffon, Nedved and Salihams were all declared unfit to play, adding to our already almost humorous list of absentees this match. Shall I go over it again? No, I shouldn't. What I will do though is tell you of another possible season ending injury we picked up on Wednedsay. Yay! I'm just gonna ram my head through my television screen now. Oh well, cheer up Juventini. We did in fact manage to score some away goals in our tie against Inter. Also, it looks as if Tiago's departure is guaranteed to happen in the next few days. Plus, you know what? Sissoko is gonna do great with us at Juventus (oh boy how am I gonna spin this one). More after the jump.

It Was End To End Stuff, But From Side To Side

For starters, this one was a pretty descent display for us all things considered. Aside from three defensive momentary lapses in concentration (of which were all envitable to some degree), we certainly controlled the ball for the better part of 90 minutes. Now in what sense do I mean "controlled the ball"? Well come to think of it, i'm not quite sure really. You see, after Inter were reduced to ten men as Burdisso was sent off at the eight minute mark, Juventus tried their best to stretch their defences and widen the pitch as much as possible. A tactic that almost always yields success, and essentially Juventus did just that. However, to Inter's credit, we were never able to create any chances through the middle of their final third. As a result, we saw all of our attacking attempts in the form of crosses.

"With a man more, we tried to play more on the wings, we had some superiority in midfield but we were very sterile," Ranieri explained. "Inter scored twice deservedly. We seemed asleep, we didn't look sharp."

Now while crossing is all fine and dandy, I think the big man smelled what I'm cooking here because our midfield was, and has been for the most part this season, definitely "sterile". We've desperately been needing some creativity in that department, especially ever since Camoranesi went down. In this game against Inter it was clear to see that the Nerazzurri felt content to sit back in their half and have us come to them. They stacked their backline, clogged their midfield, and happily defended every cross that came their way as they enjoyed a several man adavantage inside their area. So, while it was up to us to crack their sphere-o-defense, you had the sense that even though Juventus did their best at stretching the play, they'd never be able to create something seriously threatening in the middle with the personnel at Ranieri's disposal.

So with that said, why on earth are we signing Momo Sissoko on Sunday Monday? Good question, and one that I can only guess to answer. It seems as though the Mali international, who once described Liverpool as a "bigger club" compared to Juventus (WTF?), would "fit" into Ranieri's midfielding scheme. Now at the moment, that scheme is of the non-attractive variety or more commonly noted as employing the "holding midfielder". You know the scheme. Remember the reason why ex-Juve coach Fabio Cappello got canned from Real Madrid last year? Yup, because Predrag Mijatovic, Real's sporting director, craved "a more enthusiastic style of play". Now I know Juventus aren't Madrid and Ranieri isn't Capello, but it looks as though Ranieri is punch-drunk in love with this mentality. So with the moderate success we've managed thus far, I guess we should just run with it (no pun intended) until July before we try and attempt a major mid-season tactical adjustment.

Come to think of it, Sissoko isn't a bad player. He's a tough tackling defensive midfielder that most importantly knows his role. Almost like a Patrick Viera, but hopefully more like a Cristiano Zanetti. He's young, healthy (well hopefully), and available come February. Something I'm sure our sporting director finds very attractive as he'll be able make up for that Tiago. With Liverpool's reported 13 million euro price tag on Sissoko, Secco has his chance to start over as Tottenham's 9.7 million pound offer for Tiago will virtually wipe the slate clean. Expect both deals to be announced very shortly as now Channel4 is reporting that the muscular strain once believed to be the source Marchionni's game ending foul has now been elevated to a much much much more depressing level. It's believed that he has now broken his left foot's fifth metatarsal. Put your feelings for Sissoko aside, we need all the reinforcements we can get.

"The fifth metatarsal is the outermost bone in the foot and is easily damaged but requires a long time to heal.The recovery span for such an injury falls between two and four months, but returning to kicking a ball can be a long and painstaking process".

Lord when will the bleeding stop?!