Sampdoria Preview Plus: What The Shit Is Going On?

Share All sharing options for: Sampdoria Preview Plus: What The Shit Is Going On? 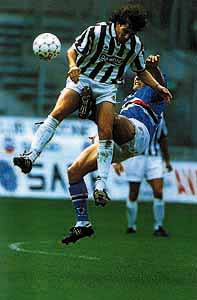 Ranieri isn't a happy camper and well, neither are we. Us tifosi Bianconeri have in the last week seen some pretty distressing stuff. For starters, we witnessed a painfully submissive performance against Catania as our side ultimately seemed deserving of a loss by way of their painfully squandered goal-scoring opportunities. Then, as if our Bianconeri answered our finishing prayers, they managed five against an Empoli side who by my estimation, could have easily reversed the scoreline if Il Fenomeno was in their line-up. Then finally, to top off our already impressive injury-list, Kieser Chiellini has offcially been ruled out for a month leaving our defences ahead of our match against Sampdoria this Sunday just about as fucked as fucked can get. But nevertheless, perhaps it's time we draw on a bit of enlightenment. So, as one of Juventus' most triumphant coaches Giovanni Trapattoni once said, "We can't behave like crocodiles and cry over spilled milk and broken eggs". Hmm yes, quite.

Now whether your thinking Trapattoni should be enducted into a mental hospital as oppose to being given the Nobel Prize for literature, you really can't argue with the man having won 14 trophies with Juventus. So Trapattoni, we agree with you. But great Odin's raven, that was some bad spilled milk and broken eggs.

Saturday's draw against Catania was tough to swallow at best. We certainly had a tough time dealing with the Elefanti's first-half attack on our right wing. Vargas had the 45 mins of his life, as he seemed to be quickest man on the pitch having his way up and down the left. But looking back, he wasn't that impressive really. I mean he's sound, but certainly not special. To be honest, one could argue that it was more a case of Saliham's (offensive first, defensive second) attributes that helped make Vargas a handful, instead of his own abilities. To know that we allowed a sub-world-class winger find too much success on our flanks for anyone's liking begs the question: What will happen to our defences come European competition next year?

Now I'm not hating on Saliham (God knows we need all the help we can get back there), but essentially Ranieri's wingback system emphasizes a team's attack by feeding strikers crosses more often then they snub out our opponent's. It's tough to give Saliham a break in this one seeing as neither his defending nor his crossing made any solid contribution. But hey, let's give Brazzo the benefit of the doubt seeing as we've all used the "weather conditions" as an excuse for poor performances in past. Speaking of poor performances, did any of you see Nocerino's blatant hack at Vargas' ankle just before the end of the first half? It was horrifying, and subsequently just about the most constructive thing Juventus did all game.

What really turned my stomach about our performance was that we could have easily pulled level with Catania well before Del Piero's injury time deliverance. I mean, even despite Tiago's best efforts to seem distracted and sluggish (when will he die), he himself was apart of several first-half pushes that should have really sealed this match. Legrottallgie's missed header just over the crossbar sent me reeling. Then it was Del Piero's turn to bicycle kick a ball over the crossbar. Then Trezeguet joined in on the fun before Saliham capped off a great night of service as he decided to head Del Piero's inch-perfect cross wide of Catania's goal as well. We were on fire that night. By "on fire" I meant sucking shit.

In our second-leg Coppa Italia match against Empoli there were thankfully a few more improvements. However, there was still a bit of milk spillage and far too many eggs being broken. Call me a crocodile if you must Trapattoni, but even you would have to admit that most our squad looked like a bunch of turkeys. The game was a fucking farce in my eyes. Here's how it went: We tied the aggregate score. Then we took the lead. Then they tied it. Then they took the lead back. Then we tied it. Then they took the lead back again. Then we tied it again. Then we took the lead back again. What the fuck was that you ask? A circus that's what. I don't congratulate them for winning, I threaten them that if they had lost this match I'd burn them in their sleep. A top club doesn't play games- well not literally. After Nedved's goal we should have locked down the match, signed, sealed, delievered.

It was one of the worst displays of world class soccer I've ever seen. Maybe that's a little harsh but it sucked plain and simple. Forget about the amount of goals we scored, they meant nothing to me. What concerned me the most was our team mentality. We seemed as if to play as a unit for 3 minutes at a time. Literally, only when we needed to score would we make an attempt at controlling the game's tempo. Then it was as if the our stronghold completely dissappeared once we found the net and then entire match was up for grabs again. What a weird one to watch.

All is not lost however (aside from Tiago's will to play, what a fucking pussy btw), there were a couple players who deserved some credit. Namely Nedved, Marchionni, Del Piero and Iaquinta. Nedved was again all over the pitch with these first touches of pure gold. Honestly, his touch on the ball is sublime as of late. He was moving play along the left flank swimmingly with Molinaro against Catania and proved his worth ten fold against Empoli with his defensive efforts. Dammit, I'm gonna start a petition for a statue of Nedved to be erected (don't get any ideas) outside the Stadio Olimpico after this man retires. My second petition will be for the permanent placement of Marchionni's head in place of every Tiago advertisement (gay porn ads included, sorry Marchionni I didn't mean that) for the remainder of the Portugese's stay. Marchionni is much more electrifying and provides us with an attacking flair. Did you see him after his second-half introduction against Catania? Forza Marchionni! Finally ADP was just simply carrying this team on his shoulders for the last two games. For 90 minutes he was getting hacked by those Elefanti but continually did his best to push forward and create whatever problems he could for their defense. Bravissimo Alex! You've saved us from ebarassment once again. Iaquinta is just Iaquinta. Juventus' best transfer this season by far!

Looking ahead, as much as it pains me to do so, Tinkerman has his work cut out for him. What does this man do for our backline? Well, obviously Chiellini, Andrade, and Zebina are no good. Perhaps he'll have to experiment with the pairing of Lego (I dont give a fuck if you're sick, your playing) and Grygera as CB's. Boumsong (who may or may not stay) I doubt is 100% as he looked a little stand-offish in his long awaited return this week against relegation-wary Empoli. So in Grygera's preferred position expect ol'timer Birindelli with the usual suspect Molinaro on the left flank. Our midfield is whats going to be the tricky part against Sampdoria. Seeing as wherever Tinkerman could decide to plug and play our defenders at the moment, that backline isn't really going to get much better or worse. So seeing as Tiago is a rat, and Nocerino is suspended, Tinkerman might opt for the Nedved-Zanetti pairing as he'll look to emphasize a defensive midfield against the high-flying Cassano. Then on the left he can slide in Marchionni, and give Palladino the chance to fuck shit up along the right flank. In attack, ADP and T-Rez will be giving those Sampdoria defenders the runs. I hope.

It will be interesting to see if perhaps Tinkerbell sidearm's his midfield and decides to give Tiago another shot. Foolish thinking on his part? Or just what the doctor ordered?