I Bianconeri return to the second half of their Scudetto race this Saturday as they square off against Catania at the Stadio Massimino in Sicily. A trip that won't see them travel too far as Juventus wrapped up their winter vacation, i mean camp, in Malta a few days ago. With Ranieri's side hungry to surpass their season's first-half results which sees them sitting third atop the Serie A, this weekend's match will certainly be a stirring one to watch as the Elefanti are brimming with confidence themselves. After their Coppa Italia victory against Milan at San Siro just before the Christmas break, the mid-table Elephants will once again try their best to prove that size really does matter, even though we all know it's the girth that counts right ladies? RIGHT??

It's really that simple. Forget about the daily trade rumours. Nevermind the hordes of media correspondents surrounding your team bus or calling your hotel room for a quote about prospective team-mates, remember your not paid to think. Now that being said, it's no easy task. Think about that from Tiago or Almiron's perspective for a minute. Staying focused for Saturday could be one of the hardest things they'll ever have to do. You see, despite all the praise and promise that they could possibly get from Blanc, Gigli, or Secco regarding their job security, at this very moment their are probably three to four t.v. sports shows criticing everything about Tiago or Almiron and their impacts (or lack thereof) on Juventus. Of which can be seriously damaging to their psyche. Do you think Britney Spears would have gone nuts if she never heard of TMZ? Either way, my point is it doesn't help.

This match against Catania is a perfect time for our veterans to step up and lead by example. Look for Il Capitano- Mr. Del Piero to realise his importance in this one and step up to provide a sense a leadership for the entire group. Following quickly in ADP's footsteps should be Nedved, Zanetti, Trez, and Buffon, who'll no doubt be asked by Ranieri to remind others to keep the game simple and provide the youngsters with examples of strength and discipline. So that said, even without Camo, Zebina, or Jorge's services, if all goes according to plan and we capitalise on our opportunities, we SHOULD have no problem here.

Great home record. I Elefanti have shown that they deserve every bit of credit for their current league standing. Sitting tied for ninth with Sampdoria at 21 points, Catania boasts an above average home field record winning five of their last eight games while only conceding four goals against. Pretty good, no doubt. Juventus should be cautious here as our away record certainly does not inspire confidence. Having won only three out of eight away games this season, Ranieri must know that if he intends on challenging for top-spot in the league come May, this trend will certainly hurt his chances. 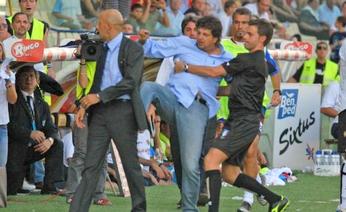 The 'bad boys' of Serie A enjoy a marvellous foul tally. With close to 50 yellow cards and five reds thus far, the Elefanti are seemingly just that- clumsy. The good news for Catania boss Baldini is that he'll get back strikers Spinesi and Mascara from their one-match suspensions. The bad news for Baldini is that he'll lose two more to suspension at the same time. Ex- Juventus midfielder and Catania captain Davide Baiocco, who spent only one season with us (2002/03), will miss this chance to play against his old club while defender Gennaro Sardo can also kiss this game goodbye.