Juventus Make Pit-Stop At Second, One Behind Leaders

Share All sharing options for: Juventus Make Pit-Stop At Second, One Behind Leaders 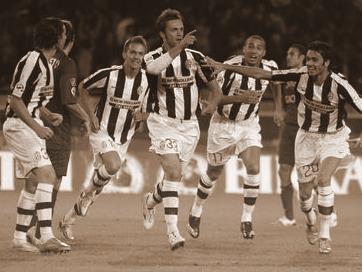 Well done lads. Perhaps a victorious score line was expected against a side like Reggina, however credit goes out to the coach for providing a few welcomed surprises. Tinkerman started the match against Reggina with what appeared to be a 4-5-1 scheme. A far cry from the offensive-minded 4-3-3 formation we saw last Sunday, however my 'spidey senses' tell me he was airing on the side of caution as our defensive injuries run about as deep as Totti's tan. Yet, La Juve blasted Reggina with four goals after the half, in what was a great win for this team (of relative subs) heading to this Sunday's derby against Torino.

First, my boy Tiago! I could not be happier for this guy. He must have been continuing to work hard in practice amidst mild criticism, and good on Ranieri for starting him and giving him his chance. A player of Tiago's ability had to finally surface and yesterday he gave us a little taste of what we can expect. Sharp passes, good possession, and great presence in the midfield made this his best game with Juve thus far.

Criscito... this kid is only 20 but yesterday he played beyond his years. Now I know he'll be tested (much like last Sunday; Totti was world-class and offside), but this game will surely do wonders for his confidence. Excellent game as our central defender, he was all over the first third of our field and reminded me at times of Thuram (who might be returning?) as he controlled the back.

Palladino was another shining light. Incredible work ethic against Reggina and it paid off with a beaut' of a goal in injury time. What else can be said about this kid that hasn't been said already?? One of Juventus' greats of the future. Guaranteed.

Trezegol, who celebrated his 100th goal for Juventus before the match, should have had a couple goals this game. However, he still played a descent game by his very high standards. After a sceptically cromulent offside call against him, as well as an incredible save made on his second attempt at goal, it was his Trez's determination and grit that secured him a place on the score. Nice finish on the goal from an acute angle, what else is new??? He's on fire-- it's Trezegol bitches!

Nocerino had another very active game and his presence was certainly felt. Solid possession and great feeds all over the pitch. My favorite was his pass to Palladino that cut the Reggina defense in injury time. Well played.

Legrottaglie was another surprise, he had a solid game without mistakes and netted our first goal. Well done sir.

Salihamidzic, like Legrottaglie, had a solid game. He created a nice opportunity for himself against the Reggina goal but was denied on account of Campagnolo's good positioning. 'Brazzo' the Bosnian did manage to slip one past the Reggina keeper this time on account of the Bosnian's good positioning, and the absence of any defensive marking from Reggina. All in all, one of his better games as well this season.

Lest we forget the consummate professional, the harmonious gentleman, and the silver-haired statesman that is Claudio Ranieri. He puts together this display without Del Piero, without Nedved, without Iaquinta, without Almiron, without Grygera, and most surprisingly of all without Chellini's defensive services. I'm not sure what these feelings inside my stomach are but I might be falling for him... (or it could the taco bell, one or the other). One thing's for sure, Ranieri is making believers out of all his players that being apart of this club is something truly special. I can only imagine our potential at this point with a healthy squad.

“If we look around us at the other teams there are certainly stronger squads out there than us. However we want to win it because the players recognise the value of the shirt they wear,” Ranieri (post game interview vs. Reggina 09-26-7).

WE'RE TAKING BACK WHAT'S BEEN OURS SINCE 1897. ENJOY THE RACE WHILE IT LASTS.