Share All sharing options for: Nocerino Hit By Car... 'Mamma Mia' whats next?? 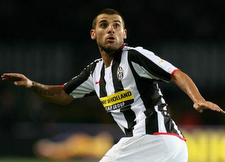 Reports are coming out of Italy today that yet another Bianconeri player will likely be unavailable for this Sunday's match against Roma. This time it was Nocerino who was apparently taken to a hospital in Turin late Monday night after being hit by a car!

The 22-year-old midfielder suffered a concussion after he was left lying on the ground unconcious, shortly after leaving the restaurant, 'Mamma Mia'. Fortunately for his family, friends ,and fans, the injuries are considered to be non-lifethreatening as he's expected to return home Thursday night. No word yet on who's to blame, or whether foul play was involved at all (no pun intended).

Nocerino's unfortunate incident begs the fan to ask the question: Are these things even supposed to happen to football players? Don't seasonal injuries result from poorly timed tackles or insufficient warm-ups? Come on, I mean really... is this some sort of joke? Are the football gods screwing around with Juventus again? Didn't they have a good ol' laugh when our balding eagle defenseman Zebina was handed his 4 match ban last week? Or maybe those horribly insensitive gods just weren't quite satisfied after handing Camoranesi his latest injury, on his first start of the season.

One thing is for sure, this weekend's match against the Giallorossi will certainly be nerve-wracking. One reason being, the slightly unfavoured Tiago will get his chance to prove his worth to the Juventus faithful this Sunday... Perhaps the football gods have something planned for him as well.