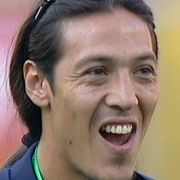 To add on to our already makeshift midfield, the injury to Camoranesi yesterday seems more serious then first expected. It appears that the World Cup Winner's right thigh strain is more serious due to a possible tear in the muscle. He is expected to miss up to a month of action, which will likely mean his Serie B campaign is over. It is extremely unfortunate since the midfielder had been in top form recently and was giving Juventus a big push down the home stretch here. He also risks missing the National team's matches in June if he does not recover in time. Deschamps is now faced with a dilemma this weekend for the midfield, Paro and Zanetti are still out and Giannichedda will be lucky to recover in time to start against Cesena. So the coach will most likely be forced to go with Dario Venitucci or Raffaele Bianco alongside Claudio Marchisio.

Defender Jonathan Zebina will also miss the Cesena match through suspension. Fellow defender Nicola Legrottaglie took it easy today after colliding with Boumsong yesterday, but said his nose is not broken. It was a little bloody and swollen so he should be clear to go this weekend.

Other News
Word is spreading about the loan deals and players to be sold this summer by Juve. The youngsters that helped us so much this season set to be sent out on loan, De Ceglie, Marchisio, and Paro will be given a chance to develop hopefully at a Serie A club. In the sales department, management is looking for buyers for Legrottaglie, Giannichedda, and Zalayeta. Nothing new here, but the speculation is heating up as we get closer to the end of the season.

Nemenja Vidic is not fit, so Milan is running circles around the bums from england. Clarence Seedorf is one of the most underrated midfielders in the world, this guy continously shines in big matches and goes overlooked by many. Daniele Bonera is riding the bench for Milan again so by all means, send him our way. I'd take Bonera any day of the week if he were available, but something tells me that ancient Milan backline may need Bonera to stay.

Chuckle of the Day
Still the SAGA CONTINUES! The legend of Adrian Mutu and his cocaine escapades are still reaking havoc across the globe! Chelsea just wont seem to give up on this stupid issue and they are demanding compensations from the ex-Juventus Striker and are going to look to get some cash from Juventus as well. Like Abramovich isnt loaded enough? I dont get this guy and his motives, instead of trying to get his team to go somewhere and win something important he wont give up this Mutu case. Heres a tip Abramovich, just let it go, learn your lesson and move on, instead of turning over your roster every summer with transfers, find a mix of players and just let them play.

look for part 2 in my transfer special this week, with love your Juventus Offside.