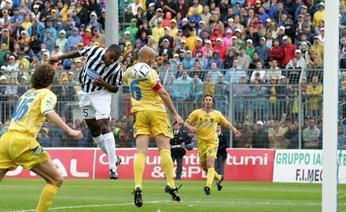 May 1st, a day where workers in Italy and across the world celebrate May Day, Juventus was hard at work earing three points to help their bid for promotion.

In a suprise, Deschamps decided not to field Alessandro Del Piero and gave him some rest for the first half. He also decided to start Camoranesi with Claudio Marchisio and Pavel Nedved in the midfield as Marcho Marchionni played up further to assist Marcelo Zalayeta and Raffaele Palladino. The Stadium was packed as expected and was a pleasant atmosphere, as the game was underway the veteran on the pitch Pavel Nedved took control and tried to make his mark. He quickly took a couple shots, but no go. Then in the 16th Zalayeta was all alone in front keeper Zappino but his effort was denied. Two minutes later as I predicted, Zebina pushed forward in a classy run but was stopped with a very physical tackle that the referee let slide. The frenchman was visibly upset and received a yellow card for arguing with the referee, but he showed real determination in this little run. Then Boumsong and Legrottaglie couldn't get out of eachothers way in a clumsy aerial collision between the two teammates that left Legrottaglio shaken up. Juventus had quite a few opportunities early on and then in the 35th Camoranesi and Nedved put on a passing symphony and Camoranesi's shot was saved again by Zappino. This little passing display by the two veterans was the highlight of the first half as the rain began to come down hard on the pitch.

In the second half Frosinone starlet Francesco Lodi continued his struggle to break down the Juventus defense, due to lack of support. But he still displayed his wonderfull ball skills. Zebina had another effort on goal off of a Balzaretti free kick, once again saved by Zappino. Then Deschamps brought in Del Piero for Palladino and Juve was rollin' again. It only took a minute after the captain was brought in and in the 58th Zalayeta found the back of the net off of a Camoranesi pass of some sort. It was an awkward looking play, none the less, the Bianconeri were up 1-0. Del Piero then had a chance to make it 2-0, but Zappino rebounded after giving up the goal with a good stop on Alessandro. Camoranesi left with an injury and youngster Dario Venitucci got a chance to play and actualy did well with the chance he was given. Juve slacked up a bit later into the second half, and Lodi, Di Nardo, and Margiotta tried to equalize for Frosinone but no serious trouble for Buffon. Into stoppage time, kepper Zappino again made a terrible error by giving away a pass which Zalayeta easily picked up, beat a defender, and put a splendid chip shot over the keeper to make it 2-0 and seal the deal for Juventus. Overall I was correct Juventus won by 2 goals, but without conceeding any. I was suprised at how well Frosinone contained the Juventus attack and that they were still in it late into the 2nd half, good effort by the Gialloblu'

The Good - Another away victory put together by a solid defense, well organized midfield, and opportunistic strikers. Another good team effort which resulted in 3 more points for the Serie A bank. Marcelo Zalayeta, after a rough first half of the year with little playing time, the Uruguayan repayed Deschamps today with 2 sweet goals. He showed he can still punsih inconsistant defenses and shotty goalkeepers. On the other side Francesco Lodi played well for Frosinone but I did not think Camoranesi would start so I thought Lodi would get more help from his midfield, but that was not the case. The Juventus midfield did not give up many chances and when they did Buffon was there. But still Lodi has impressive ball skills, a great vision for the field, and a calm collectiveness about him which will surely be on display for years to come.

The Bad - Not realy bad but Legrottaglie and Boumsong's collision was ugly, these two are in paradise when they play together at times they are lock down defenders, but as in the first half today they are as clumsy as a new born deer. Boumsong also made a lousy backpass in the first which almost screwed Buffon. To add on to his lousy first half the frenchman was absolutely beaten by Castillo but luckily the Frosinone striker could not finish the run. Wow we truly need someone off of my wishlist for this summers transfer market, anyone off of that list PLEASE!

In other news, yes we won 2-0 but a total of 5 goals were scored by Bianconeri today in Serie B action. On loan striker Rey Volpato scored 2 and had an assist for Arezzo as they continue their remarkable fight for Serie B survival. Another on loan striker Tomas Guzman scored the first goal in Spezia's 2-0 win over Pescara today. Good to see Volpato doing well again after battling injuries all of last season at Siena and Guzman now getting playing time after being loaned out this winter and showing his talent. Next season look for both of them back in Serie A, but on loan at smaller clubs, Volpato with a slim chance of making the parent club, but Guzman faces the risk of being sold as well.