Juventus - Bologna Wrap Up: The Sweetness that is Sebastian Giovinco

Share All sharing options for: Juventus - Bologna Wrap Up: The Sweetness that is Sebastian Giovinco 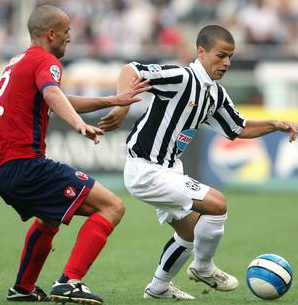 Another drama filled match between Juventus and Bologna this time in Torino at the Stadio Olimpico. The most important part was that the Bianconeri picked up the 3 points to edge ever closer to Serie A promotion. Like I've been boasting and trying to enlighten all the readers about for some time now is the Sebastian Giovinco effect and finaly saturday hopefully those of you who saw the match got to experience it. In a duel between the leagues two top goalscorers captain Dep Piero outdid Claudio Bellucci scoring two to the Bologna strikers one.

The first half started off balanced and to my suprisde Deschamps started an unfit Giannichedda over Zanetti and ended up losing on the gamble In the 26th minute Giannichedda had to come off and Zanetti came on, reversing Deschamps plan which in my opinion was worthless knowing that Giannichedda was unfit and could not go the full 90. Only a minute later Bellucci beat the shotty offside trap and calmly put the ball past Buffon for the 1-0 lead. The next few minutes Juventus tried to regain composure and it paid off in the 37th with a nice through pass from Zanetti to Del Piero to even the match and the capocannoniere race. With the equalizer the Bianconeri continued their attack with a series of runs, crisp passing, and continued pressure. Bologna keeper Antonioli kept the away team in the game with saves on Trezeguet, Balzaretti, and Del Piero. Give and go's between Balzaretti and Del Piero produced a nice effort but a save from Antonioli. Into halftime the teams went tied up at 1 apiece.

Right off the bat in the second, Del Piero broke free and had another effort on goal denied. It was clear as ever that Deschamps' men were pushing looking for the next goal, in the 51st another Del Piero shot but no cigar. Palladino had his chance but no dice, and the offensive onslaught continued. The only thing clearly lacking was Nedved's presence which he bombards opposing keepers with long range shots setting up Trez and Del Piero for reboung opportunites keeping defenses off balance. No worries because Del Piero continued his impressive display but still denied by Antonioli shot after shot. Finaly in the 76th minute, Sebastian Giovinco came off the bench for Raffaele Palladino to make his first team Debut and in the early morning in the Constitution State a loud scream of joy could be heard from the Juventus Offside headquarters. Immediately Giovinco made his presence felt by weaving through defenders and with his superb vision sent Del Piero through with a perfect opportunity but the captain shot high. The tension continued to grow as the match came closer to full time and Juve looked for the match winner. Then in the 85th minute ref Ayroldi rewarded Juventus with a penalty for a very controversial call on Vlado Smit. Personaly I'll be fair it was a bad call as Marchionni went up for the ball, Smit barely touched him and a penalty should not have been given, but in any case. All hell broke loose, youngster Cluadio Terzi was sent off, soon after punk Massimo Marazzina was sent off. The benches were all up, the away Ultras were getting rowdy, Del Piero finaly after having to retake the penalty put it in the back of the net for the 2-1 lead. Bologna came storming down and a SPECTACULAR save from Buffon saved the game, from a Bellucci header. Juve sealed the deal with you guessed it once again Giovinco setting up Trezeguet for a tap in.

GIOVINCO........... dont be fooled by the small stature, just look at Lionel Messi (no im not comparing the two's skills, just the size). Giovinco clearly showed his speed, passing, and stellar vision by sparking Juve in the 2nd half and contributing to an important victory. Im still on a Giovinco high after the match at 20 years old he will grow a bit and build his physical stamina. I've been praising this youngster all year now and he may be the heir apparant to Del Piero. I hope what we saw saturday is just a preview of the future, he needs some experience in Serie A either on loan (Reggina, Udinese, Sampdoria) but he is just the latest to join the Palladino, Chiellini, Criscito, Marchisio, Paro era.

ohh yeah and happy mothers day to all the moms out there, I know its a day late