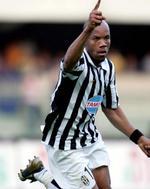 A well deserved and expected victory away at Verona leaves Juventus on track to Serie B glory ha! At the Stadio Bentegodi the Bianconeri came away with a solid 1-0 victory over the Veronese. Instead of a welcome back party for Camoranesi the ex-Verona hero was greeted with constant whistling, I was hoping for a cake and ballons, but who cares as his team will be playing top flight football next term, and the Veronese are still struggling to hang on in Serie B. The lone goal came from the French defender/Deschamps' best friend Boumsong off of a Alessandro Del Piero corner kick at the end of the first half.

The first half got underway and Juventus came out firing and Verona knew they had to play a physical match to slow down the determined Bianconeri. After 5 minutes Del Piero had an effort on goal and the away team quickly made a statement they were there for the 3 points. Camoranesi and Del Piero kept pushings and setting up the attack with good crosses which never left the Verona defenders a chance to settle. Verona though played a very physical match and commited many tactical fouls. In the 14th minute Del Piero hit the woodwork after some nice play and it was only a matter of time until the ball ended up in the back of the Verona goal. Verona defender Lorenzo Sibilano tried to keep Del Piero in check by commiting a series of fouls on our captain. We had a few opportunities off of the free kicks that came close as well. Then in the 26th minute Giannichedda suffered some muscular problems and came off, as Marco Marchionni took his place. Marchionni quickly entered and had an effort on goal from a nice Nedved cross which went wide. Del Piero continued to school the Veronese and gave young midfielder Nico Pulzetti a lesson and a headache with his fine dribbling and nutmegs. The same can be said for Sibilano as Del Piero made both of them look foolish in this match. Juve finaly broke through towards the end of the half when Boumsong connected with a Del Piero corner kick to give Juve the 1-0 lead going into halftime.

The start of the second half was dominated by referee Trefoloni who called Del Piero in an offside position, when there was none, then to even the score during a Verona attack he called ex-Torino striker Marco Ferrante also offside which again he was not. As the match moved on Marchionni showed his skill with some nice actions and Nedved contined to look for his long range goal. In the 23rd minute Del Piero once again tortured Sibilano leaving him to ask why oh why did Verona coach Giampiero Ventura let him start! The rest of the match was toned down a bit as Juventus controlled the ball well and the defense was solid, and Gigi was not tested much. Nicola Legrottaglie had a scary moment in the 34th minute after a collision and was quickly substituted by Robert Kovac who finaly returned after missing time through injury. Del Piero looked for his signature on the match with a goal but could not find the net, and as Verona pushed forward the Juve counter attack kept the home team honest and the game finished 1-0 for the Bianconeri.

The Good- Del Piero was phenomenal, truly one his best matches this season, and showed why he is a world class player as he continues to make Serie B defenders look foolish. Pavel Nedved looks like a young lion out there still, he continues to show his determination and fight at his ripe age as he causes mayhem on the left side. Marchionni was called on sooner then expected and proved his worth, playing a good role in the attack and good ball control. Camoranesi as well played another good match, sending in a fair share of crosses at his old stomping grounds and has realy been in form as of late. The sometimes nerveracking defense of Boumsong and Legrottaglie proved to be solid, yet it was only Verona owners of the worst attack in all of Serie B. The names Iunco (4 goals), Cossu (0), Ferrante (1), Cutolo (2), and Greco (1) dont scare you? When your leading goal scorer is at 4 goals at this point of the season, I was pretty confident our defense would be ok at Verona. And that also ladies and gentleman is the new feature here at the Juventus offside the Chuckle of the Day, matchday 36 of serie B and Verona's leading goal scorer Antimo Iunco has scored only 4 goals.

The Bad- That we only have a little more then a month to go and Igor Tudor the Croatian Sensation still has yet to play.