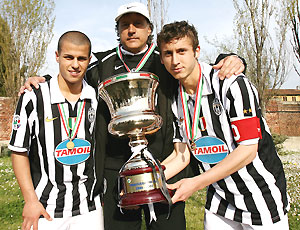 Since I was out of action for a while there is a lot of news to catch The Offside readers up with. First off I'll start with the Juventus Primavera squad dominating Inter's primavera to win the Coppa Italia for the youth ranks. The Baby Bianconeri won the first leg 2-0 and then tied the second leg 1-1 to secure the title. Like always, Juventus no matter which level, always conquers the nerazzurri. Inter fans, keep this in mind for a sign to things to come, remember the names Lanzafame, Giovinco, Maniero, and De Ceglie.

Another promising youngster Antonio Nocerino who is currently on loan at Piacenza has voiced his dream to play for Juventus next season. He is currently on loan at Piacenza and has had an impressive campaign to date, being rewarded with a chance to play at the new Wembley with the Azzurrini last month. Personaly I'd love to see Nocerino get a chance with the club next year he has shown some sweet skills and playmaking this season. Out of all the loaned out players he has proven his worth the most this season. He deserves a role on the team next year it can pay off and is a lot of money saved, and then if it does not work out he can be loaned out in January for more experience. Im not saying a starting role, but a bench role.

One of my favorite players looks likely to be available this summer, none other then Giampiero Pinzi. The Udinese workhorse was a star of the Italian Under 21 team a few years back and has battled injuries the past few years to return to top form. Still only 26 years old the central midfielder is an experienced Serie A veteran now after seven seasons in the top flight with Udinese and can be a huge addition to our midfield. I think he can be an excellent fit for Juventus, in a part time role with Zanetti or as a starter. Once again, another upgrade over Giannichedda. I'd take either Pinzi or Marco Motta, so Udinese prepare to hand someone over.

Il Puma speaks out! Ex-Juventus midfielder Emerson rocked Zlatan Ibrahimovic and Patrick Vieira for going to inter saying "they didn't respect Juve". Cant argue with him on this one, and I'd welcome the Brazilian midfielder back this summer if there was anyway he'd like to come back.

Ex-midfielder Stephen Appiah is back in transfer news after the past few seasons at Fenerbache. Midfield workhorse Appiah was sold to Fenerbache during the Capello era because he was "not right for the system" but soon after during the World Cup he showed the world he was a midfield presence. So now in this rebuilding process Appiah could be a big addition to the Bianconeri, a good friend of Del Piero has admitted he would welcome back a move to Italy. He has another 2 years left on his contract, but with the big budget Juve management could probably get him sooner especialy with the player willing. Appiah was put into a tough position when he first came to Juve, he never had a consistant role or partner in midfield, in the right situation he can realy strive.

To the sweet big news or "Uber News"......... after speculation German midfield general Torsten Frings is now planning to meet with Juve management on a summer transfer. After initialy denying a transfer over a month ago, the German seems to have had a turn around. Lets not f*ck this one up and get Frings to TORINO! This guy is a HUGE addition to the team and at 30 years old is perfect for this initial rebuilding cycle at a position that lacks solid depth.

Lastly a transfer that I would love to see work out, Arsenal youngster Mathieu Flamini is set to be leaving England this summer and Italy could be the destination. With a lack of playing time at Arsenal the 23 year old would be an excellent fit with Juventus. After
speaking with Patrick Vieira the youngster seems set on transferring to Italy. I've liked Flamini for a while now and pondered a move for him but he just didnt seem to be one of Arsene Wenger's key youngsters to get solid playing time. At only 23, if we do get a big name midfielder (Frings, Gilberto, Emerson) I think Flamini could be a perfect compliment as a starter.