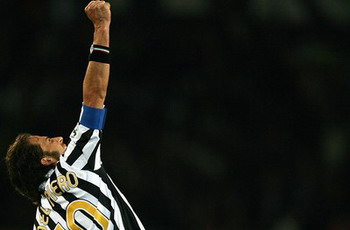 A sunday night posticipo in Torino, like the good ol' days except we played Piacenza and we are in Serie B. Still, this is as close to primetime for the Bianconeri until next season in Serie A. A very good performance from Deschamps' men, including another hat trick for Del Piero. David Trezeguet also found the back of the net, and it only took about 34 seconds.

The tone was set at the Stadio Olimpico, the promotion for the game was "Juventus flag thundersticks", unfortunately I did not save the picture of them so I can not share with you readers how the atmosphere was increased with them ha (yes that was sarcasm). A rare primetime fixture for the B ridden Juventus squad had a good buzz around the team and the stadium going up against Piacenza.

The first half was played well by both sides, but the nerves in the beginning by Piacenza cost them dearly. A mistake in the defense about half a minute into the game gave Trezeguet an opportunity for a SICK goal. As Piacenza tried to get the ball moving, a slow backpass interupted by the Juve midfield had the ball fall to Trez and an insane one timer into the back of the net to give Juve the early lead. His nasty left footed shot from outside the box, had my jaw drop and shake my head at the same time, wondering how Piacenza could make such a costly error so early. Answer, obviously nerves and, to have to start the game from behind was not going to help in my opinion. But Piacenza actualy collected themselves pretty well and came back and threatened very quickly. They put a lot of pressure on the Juventus defense early on, causing some sloppy play by the backline. As I predicted, Antonio Nocerino was a big impact on the attack and had some shots that had Buffon hard pressed into action. As the first half went on both sides had chances and Nocerino and Daniele Cacia both had some chances to tie the game. Cacia's speed was aggrivating the Juve backline as he was all over the field in a respectable first half performance. Cacia and Nocerino although were not enough to overcome Juventus.

The 2nd half started off and within no time Del Piero earned a penalty kick after being brought down by Coppola the Piacenza keeper. PK, Del Piero, Goal, 2-0. The 2-0 lead demoralized Piacenza a bit as things slowed down, Nocerino and Cacia could not continue their first half pace and the Juventus defense was lock down. The starting 3 for Piacenza up front Stamilla, Cacia, and Degano could not get a sniff as time went on, leading to the substitions, and the nail in the coffin which was seeing Campagnaro being sent off. Before all was said and done, the starting 3 in the Piacenza 4-3-3 had all been subbed off, and Del Piero had made it 3-0 on beauty of a free kick. Somewhere in the mix Camoranesi came on for Marchionni to a good amount of whistles. In the closing minutes, Del Piero recieved a good ball from Nedved, made two Piacenza defenders look absolutely stupid by having them take a seat, and scored once again to complete the tripletta.

The Good - Del Piero- 3 Goals what else can I say, Trezeguet- got back in the rythem, good 1st half performance, The 2nd half Defensive back line- they all played very well, were more organized and confident in their play. Man of the match obviously Del Piero. Antonio Nocerino played exceptionaly well, I can throw it into the good because he can very well be apart of our future.

The Issues- Nothing realy bad, I mean it was 4-0. But still nothing concrete out of the center midfielders, I was wrong Paro did not start, Giannichedda did and I was pissed. Giannichedda didnt kill us, but didnt do much to get on the highlight reel. Boumsong in the first half, looked sloppy, put Buffon and Chiellini in trouble and had me wondering, luckily he improved as the game went on.

Other news, Congrats to Camoranesi, not only was he fit enough to be subbed into the game yesterday, but recieved plenty of whistles AND became a father for the third time. Mauro and his wife brought in the newest of three boys, Matteo, congrats to the Camoranesi's, wish them all the best.