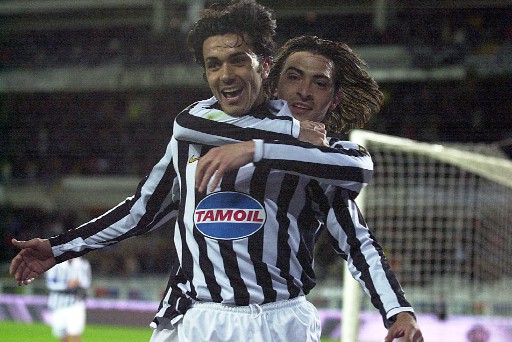 As expected Juventus easily handled and dismantled Triestina 5-1. I thought the Bianconeri would win so I went with a safe 2-0 prediction, but Triestina was thrashed for 3 first half goals and another 2 in the second.

The first half started suprisingly with Triestina striking first with a 7th minute goal. Youngster Andrea Peana beat the Juve defense and took a shot, and Buffon saved it but let the ball rebound right into the path of Federico Piovaccari who easily put it into the back of the net. Seconds later as expected Juve came right back downfield Balzaretti sent in a nice cross and Camoranesi beat defenders to the ball in the air, and headed a nice equalizer. So within 10 minutes, a 1-1 tie, but you could tell this game was going to get out of hand quickly. Triestina had no answers for Juve's crisp passing and the Bianconeri were clicking on all cylinders. Give and Go's, Zebina attacking down the flank, Del Piero then hitting the post, Paro and Zanetti dominating the center midfield it was pleasent to see. Zebina was set out on the wing and Chiellini in the center, contrary to what I thought Deschamps would do. Anyhow it worked out fine, Zebina added good rythm to the attack and covered in defense very well. I guess Deschamps gave Matteo Paro a birthday gift (he turned 24 on saturday) by letting him start today paired with Cristiano Zanetti in the midfield. The tandem was excellent, Paro was able to push forward into the attack and Zanetti covered him, and vice versa. They complimented eachother very well today. Then in the 27th minute, Chiellini sent in a sick long ball to Palladino, who made the lone Triestina defender and goalie Generoso Rossi (who actualy took a seat) both look drunk with some nice ball skills, and made it 2-1. All was well in Torino again, soon thereafter, Del Piero tangoed with Triestina defenders and sent in a lefty chip to Palladino who volleyed it just wide. I was drooling watching all this just knowing this game was going to soon be a drumming, boy was I right seconds later the ball on the right this time, Camoranesi with a sick heel pass to Paro who was streaking through, he beat the defender to the goal line, and sent in a pass to Palladino who finished for the 3-1. Camoranesi-Paro-Palladino-Goal, it was a thing of beauty, play of the game in my opinion. End of 1st, 3-1 Juve, the game was over after the 2nd goal, no doubt.

2nd half, Zanetti who was bleeding from the head, came off during halftime and young Claudio Marchisio came on to pair up with Paro. The half started off with Zebina attacking more and Balzaretti controlling everything that came his way. Paro continued owning midfield, by pushing through the Trieste backline and falling back to stop the Trieste attack. He pushed forward and battled for every ball, I love this kid, I honestly hope he stays with us and develops into the star I know he can be. Then in the 60th minute Del Piero sent in a precise pass to Palladino again, who beat the offside trap and completed his hat trick. Zebina thrived still winning balls and a couple efforts on goal, despite whistles from the crowd. In the 72nd minute Palladino was subbed off to a standing ovation for Bojinov who quickly put his mark on the game by finishing a sweet perfect cross from Nedved in the 81st minute.

The Good- Palladino was spectacular, showed off his finishing prowess and ball skills by toying with the defenders. He actualy made the keeper look like this idiot on his first goal. Balzaretti was solid and pushed up the wing very well, the same can be said for Zebina who was also a threat on the wing all game. Nedved, Del Piero, Camoranesi, Chiellini, all played excellent. Matteo Paro probably my favorite, was outstanding fought for every ball set up the 3rd goal, great midfield domination. Overall I was very pleased, the whole team played great and they looked like a classic Juve team they had chemistry and honestly looked like they were having fun out there. Deschamps even said the whole team had fun after the previous 2 games. You could even see it on the pitch the passing and efforts, all around they looked stellar and it could have been more then 5-1. Now were a nice 6 points ahead of Napoli.

The Bad- Nothing bad other then the Ultras. They got on Camoranesi who played very well looked like the top Camoranesi of the National Team and Serie A Juve. Then they absolutely rocked Zebina with whistles when he was subbed off, I truly respect Jonathan for stoping his walk off the pitch to applaud the fans who applauded him and ignoring the whistling ultras. Its sad to see this happen to these players, hopefully they ignore the whistles and only acknowledge the applaudes. These few fans who insist on the abuse need to realize if the 2 players were truly mercenaries they would not be starting in Juve jerseys right now. Imagine having to also fill the void of Camoranesi and Zebina at the end of this year to add on to our sloppy defense, and weak central midfield? Go ahead continue with the Zlatan Zingaro chants awhich is deserved but back off Camoranesi and Zebina. The Ultras continued their lunacy when they chanted against the Police and Carabinieri for most of the 2nd half. Goodness I cant wait for this season to end and to be back in A.

We send 7 players to national team duties this week which causes our scheduled match with Napoli to be postponed.

As much as I am psyched for national team games this week, im more excited to see the Azzurrini at the new Wembley. Good luck to Giorgio and Raffaele and the senior Azzurri who take on Scotland.