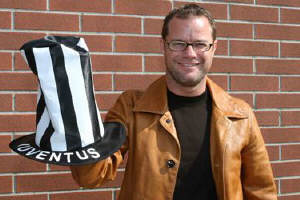 The Monday posticipo at the Stadio Olimpico in Torino is a prime time affair which calls for a prime time fan giveaway pictured. Which is why the first 15,000 fans will get some sweet hats in honor of the "Festa Del Papa'. Well im kidding the match doesnt exactly have a thrilling outlook, but the giveway is still good stuff. The reason why this match doesnt excite too much is the fact that Triestina is a fairly young team and realy hasnt done much to impress me, and lack a major goal scoring threat. I guess you can say that about Brescia also (Brescia are have more talent) so that is why I'll preview the game for you to decide.

Triestina- Their leading goal scorer is the young Federico Piovaccari with a whopping 4 goals. The youngster on loan from Inter is tied with teammate Luigi Della Rocca, but the latter will not take part in this match. Piovaccari will be playing with Marchesetti, Allegretti, and Graffiedi behind him to challenge the Juve defense. I remember years back when Mattia Graffiedi was once considered a solid prospect for AC Milan, but that never realy worked out as he has been the a classic Serie B Journeyman. Triestina's last 2 matches have been victories over Cesena and Arezzo. But last week against last placed Arezzo, the losing side was without striker Rey Volpato and Bricca was sent off, and Piovaccari's goal came in the last minute, so it wasnt exactly domination for Triestina.

Players to watch for- For Juve look for Palladino to try to play well to make it known he can be consistent. Look for our league leading goal scorer/ captian to continue his hott streak and shine at home. Camoranesi is back from his suspension and Im assuming he doesn't want to be miserable so he will put forth a better effort then Brescia. But my favorite for this week Giorgio Chiellini, who will play where he plays best on the wing instead of the center of defense. He should shine and hopefully put on quite a show.

As for the opposition, I guess look for the goalscoring tandem of Isah Eliakwu and Andrea Cossu coming off the bench late for Triestina to be a real threat.....what are you nuts? just look at the stats. Honestly Mattia Marchesetti playing behind the lone striker should be somewhat interesting, other then that Triestina doesnt do much for me.

Outlook- The fans were rough last week, the team played horrible the first half, hopefully we get the Juventus of the 2nd half all game tomorrow. We need a positive turn around for the fans and players sake. I'd like to see Bojinov get a chance to play even though his comments about returning to Fiorentina are going to stir up drama in the next week (he basicaly says he'd go back to Firenze for coach Prandelli and the fans). We got help with Napoli and Genoa losing so we're set up for a good game. Hopefully we get the best, i'll go with 2-0 for Juventus.

side note- as the NCAA tournament I hope everyones brackets are going well, and Happy belated St.Patricks day to all even though I wish there was a holiday that promoted Stella Artois drinking and Juventus jerseys instead of Guinness and people wearing Celtic jerseys.