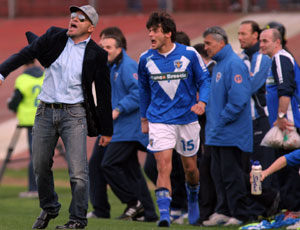 The only stadium we've suffered a loss in this season, struck again Saturday. Brescia could not have had a better place to play the game, the Stadio Martelli was an excellent choice as the rondinelle shocked Juventus 3-1. A spectacular performance by 28 year old Brescia striker Matteo Serafini was enough to down Juve. video links at the bottom

Serafini scored a hatrick in the first half to stun Deschamps and the boys going into halftime. A dreadful performance by Juve started off with a Buffon error in the 4th minute, he was out too far off of the line and Serafini slipped past the lacklustre defense and lobbed one in over Gigi. Just a few minutes after I was back to reality as the weekly Del Piero free kick goal occured in the 9th minute and everything was all well again. Now as Im watching im thinking to myself ok, we're going to settle down as the game was off to a rapid start, but we've equalised so with some ball control we will break the defense......WRONG, Trezeguet touched the ball like once, and had a lousy effort, he was invisible, Boumsong was playing like a stupid hippy in a Vermont field during a stoner festival absolutely clueless, and Camoranesi looked as if he didnt want to be on the pitch. As this circus is going on Marek Hamsyk is running circles around players and only losing the ball to himself, Zambelli absolutely dominating the right wing, and the rest of the Brescia squad was playing as if it was the Champions League final. Serse Cosmi is on the sideline screaming orders like a drill sargeant. Then as im in my stooper from the night before still (EST game time is bright and early 9 am) Hamsyk sends in a cross and once again Serafini is there with a SICK bycicle kick to make it 2-1. At this point im shaking my head saying what the f*ck is going on here, the crowd is just intensifying and Juve look in shambles. It couldn't have help that Brescia's supporters and Mantova have an alliance or "gemellagio" which is why most of the place was rocking with Brescia dominating. More sloppy play, weak passing, and clumsy challenges and there we are just about at halftime, Serafini steals the ball from Zebina like it was his girlfriend and unleashes a wicked shot past Buffon for the hatrick. No need to realy go into the 2nd half, its too emotionaly draining, well no it isnt but it was just as miserable. Marchionni came on for Camoranesi who had a piss poor performance, Palladino came on for Balzaretti, and Bojinov came on for Zebina. World class moves by Deschamps or desperation, as he could not crack Serse Cosmi's formation. Juve pushed in a sloppy formation, lack of organization, and strict Brescia backline, denied all 2nd half chances.

Issues- Boumsong, Camoranesi, Giannichedda, mostly everything. Boumsong was back to his old ways after a decent outing last week. Camoranesi did nothing, which is why Trez didnt get many balls. Camoranesi wont be playing next game after picking up a dumb yellow. Giannichedda let Piangerelli and Lima own the midfield as the game went on, a serie B midfield dominating Juve? come on, I think I've shown my displeasure for Giannichedda enough, Paro NEEDS TO START. Deschamps also ending the game with only 2 defenders and 4 forwards? it looked like an MLS formation OUCH

For my beloved reader Laurie who wants to know the scoop on Trez, well he has been suspended for 3 games for an elbow on young Brescia defender Fabiano Santacroce. The elbow was not seen by the referee but the Italian Disciplinary Committe which review video's of every match weekly saw it and slapped Trez with a 3 match ban for "violent conduct".

The Good - Well Brescia... Serafini had the game of his life, he dedicated it to his wife how lovely. The Brescia defense, absolutely locked down Juve and cleaned up every attack. DEL PIERO our captian of course, good sportsmanship, another goal to lead all scorers, and never gave up. Zanetti also, yes Zanetti, he had a good effort in the first and had to pick up the slack from Camoranesi on his side, so my hat off to you Cristiano. Chiellini was decent, probably the most solid of the backline, and Marchionni when he came on in the 2nd brought a slight spark, but it was too little too late.

Final Thoughts
The highlight of the day was the banner from the Bianconeri supporters which read "MUCHAS GRACIAS VALENCIA" excellent stuff. Napoli tied with Rimini so we are still in first, and after all this ruckus I've rambled on about it doesnt matter much because we will still finish in first and be back were we belong next season! Hopefully no one pulls a fast one on us and wants to play their games against us in Mantova.

Here you go Laurie here is a video of the game at the 2:20 point you can see the Trezguet elbow. I know most of you may not understand Italian, but this is worth watching, its a video of the Brescia radio commentator when Serafini scored his 2nd goal. As much as I am dissapointed in the loss, I can still respect Brescia's effort and this video just goes to show you if Serafini were to never score a goal again he is a Brescia legend in the hearts of fans.