Share All sharing options for: Juventus - Modena Wrap Up .... Leaving it Late 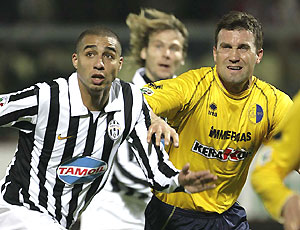 A chilly night in Modena between Juventus and the Gialloblu ended up being decided by an own goal. Juve played strong throughout and came close to scoring on numerous occasions, but Modena keeper Frezzolini was phenomenal and had some marvelous saves. Del Piero and Nedved had numerous shots stopped and Camoranesi sent in cross after cross in solid performances.

As the 2nd half went on Juve seemed a little more sluggish and Nedved seemed more and more agitated and it showed in a clumsy challenge late in the match. Deschamps subbed in Bojinov for Del Piero which I thought was appropriate and Bojinov brought a little added speed and spark to counter Modena bringing on Ignazio Abate and Marco Rossi. I have to admid Rossi and Abate threatened and had me a little worried as our defense tired late on, but the usual Buffon was there to keep it scoreless (the two Modena youngsters have a bright future ahead). Then late in the 41st minute of the 2nd half Bojinov sent in a cross to Trezeguet which was headed into the Modena goal by Centurioni and the own goal sealed victory for the Bianconeri and 1st place.

My issues with the match, the central midfield, Zanetti and Giannichedda, they were not terrible but did not do enough to develop anything. Most of our attacking came down with Zebina, Balzaretti, and Chiellini to Camoranesi and Nedved. I must add Balzaretti and Chiellini played well and were aggressive all game. Back to Giannichedda, he was almost invisible in the 2nd half, Zanetti at least had some chances and solid efforts, but not stellar. I saw more action between Lauren and her insanely stupid skanky friends on The Hills then between Giannichedda and Zanetti. Matteo Paro truely makes a difference paired with Zanetti, Giannichedda is a solid substitute but I dont like him starting often. Overall we dominated most of the match, not enough development of play but more individual efforts which Frezzolini denied.