Secco call Moggi (oops), three-way Gigli and send some posted notes Pessotto's way. We need this kid signed now. What the fuck, in today's sporting world if you don't sign em when they're young someone else will, right? Milan signed the prepubescent Pato who has yet to play a single game for them and Berlusconi is already constipated. Manchester United signed nine year old Rhain Davis after his family member sent them this amazing video highlight. So when you think about it, why shouldn't Juventus wrap their red tape all over LTB? Sure he's a little inexperienced and his finishing needs a little sheen, but he'll come around. Trust me, nothing would be worse than seeing this kid wear colours other than black and white. But who am I kidding, this kid was a Bianconero from birth.

In case you haven't heard of Louis (or Luigi) Thomas before don't panic, neither did I. That's because he is the new born baby boy of our beloved goalkeeper Gianluigi Buffon and girlfriend Alena Seredova. Louis Thomas Buffon was born at 3:48 am on December 28 in a private clinic in Torino. The healthy baby boy tipped the scales at 3.5 kg or 7.7 lb and measured a whopping 52cm in length! Damn. That's downright painful. But it's all for the best, this kid will be over 2 metres tall for sure.

With stats like that he deserves a holy title. Perhaps 'The New Messiah' (or as R.J. put it bluntly "Jesus Christ the Son of God"). Now of course I don't mean to blasphem (who knows about R.J.), but maybe the Vatican will let this one slide. Come on now Pope, think about the striking similarities for a second. Jesus' father (Joseph in this case) was a carpenter who by trade, was good with his hands and his mother Mary was approached by an angel who told her she'd carry a very special boy. Least we forget, LTB was born during the Christmas Holidays, shockingly close to Jesus' birthday on the 25th of December. No good Pope? Well fine, but the Juventini out there think the world of Buffon and his new arrival. 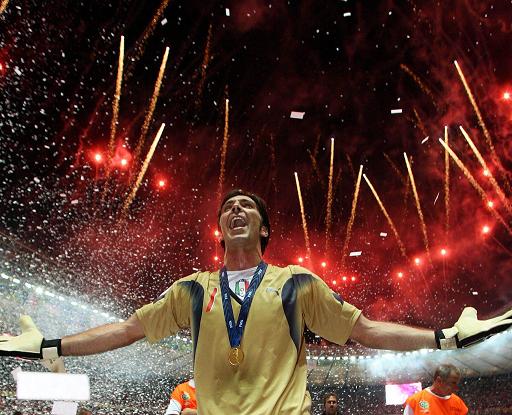