Share All sharing options for: Lazio vs Juventus: Preview, Plus Post-Game Post-Mortems

So, how have you been? It's nice to be writing again. What have you been up too? How's the backhand? We haven't spoken in a while... I know I know it's all my fault. I've been a terrible blogger as of late and possibly an even worse undergrad. Funny I should mention my recent troubles within academia, it seems The Old Lady has put out a few troubling performances as well. To give ya'll the gist we've had an unfortunate draw against Milan, an upsetting loss against Empoli, and a sterile performance against Atalanta. Yup, that sounds worryingly familiar. Well, all but the sterile part I swear. So, as I get back into the swing of things before this Saturday's match against Lazio, here is the much anticipated match preview followed by a few weekend's worth of recaps for your reading pleasure. Buon Appetito!

So, this weekend somewhere between our Friday night hangovers and our Saturday night pre-drinking festivities our beloved Old Lady squares off against those boy in blue. As we travel to the Stadio Olimpico di Roma to face Lazio, Juventus will have to put aside a few turbulent performances in order to successfully win in front of what will certainly be a very hostile crowd of 82,000 tifosi. Coming off a fresh thrashing against Real Madrid on Tuesday, which sent them packing from European competition this season, Lazio will most certaintly want to put aside their own recent shortcomings as well. That said, expect a fucking barn-burner.

No charitable Empoli-like Ranieri here, expect him to field a similar line-up as he did against Milan. With the exception of Molinaro who may or may not be replaced by Criscito after Cristian's hand surgery might leave the left wingback on the pine. What will be interesting to see is if Ranieri will opt for a 4-3-3 formation or use his more popular 4-4-2 scheme. Seeing as Iaquinta and Del Piero both turned positive performances against Empoli, most notably after Almiron's sending off, Ranieri might indeed 'tinker' with a three men attack including the ever diabolical Trezeguet. It would certainly keep Lazio on their toes. However, for this to happen our midfielding usual suspects of Nocerino, Zanetti and Nedved would have to have another extraordinary output to not only sustain and control possession, but attend to their already fairly large midfielding defensive duties against Lazio. So basically expect a 4-4-2 without Del Piero and nevermind anything I just said.

On the other side of the ball you have your favorite fascist soccer club who brought the soccer world such greats as Sinisa Mihajlovic the free-kick Serbian superhero, Alessandro Nesta, Paolo Di Canio (as seen in photo), and the ever youthful Pavel Nedved. It's true it's true, despite rumours of Nedved's birth on the alien planet Krypton, before being rocketed to Earth as an infant by his scientist father moments before the planet's destruction and crash landing on a soccer pitch in Turin, Nedved was acquired from Lazio by Juventus in what would turn out to be Lazio's greatest export in the region's entire history of existence.

As far as their formations go, expect a 4-3-1-2 with the likes of Rocchi and Pandev upfront tesing Lego and Keyser Giorgio. As their centrocampista, the talented 23 year-old Mourad Meghni will take on the duties of the supplying Rocchi and Pandev ahead of his three supporting classmates in Mudingayi, Ledesma and Mutarelli. Lazio's defensive duties will have the unenviable task of trying to contain Trezeguet and Iaquinta with the likes of Scaloni, Siviglia, Cribari and De Silvestri. Then you have their 43 year old stopper Ballotta. He's no Oliver Khan, so pressure that defense and have them play some balls back to nonno over there. You see, most men Ballotta's age spend their days diving for fresh clams and muscles. They don't handle the pressure's of twenty-somethings running after them very well so they resort to single stroke motors and small fishing boats that navigate the calm waters of the Adriatic. Pressure this guy and SHOOT SHOOT SHOOT Nedved we're talking to you. If he can pull a fucking rabbit out of his hat at 43 and have the game of his life, fine there are things in the universe we'll never be able to explain but don't let nonno off easy that's all. 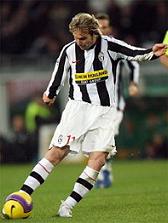 Were do I begin? Ahh yes the excuses. Well really, our only credible excuse would have to be Camoranesi's adsence. Now I knew he'd be missed, but I really never grasped just how badly we depended on his services until seeing our last match against Atalanta. Wow, for the most part we looked like frustrated Alaskan fishermen trying desperately to secure a payload of king crabs minutes before the end of their fishing season (don't bother asking me how I came to that conlusion I have no clue). Our defense and midfield were rushing every bloody pass. At times when Nocerino or Zebina weren't giving away the ball, our effectiveness at stringing more then 5 passes together was squandered by a premature long ball or an ill-conceived through pass. I could go into more detail but I'd prefer to stop the bleeding. I mean they're professionals and it's only 5 fucking passes guys. By the fourth your already in great shape to open up defences. One touch here, two touches there, one cheeky back heel here, step into ball and shoot. But does anyone listen, no of course not. So, the Blonde Bomber had to tutor us once again on how to get the job done, thankfully. Bravissimo Nedved!

Right about now I would normally go on and on about Nedved's hair (God its looked as radiant as ever), but in light of Camoranesi's recent health complications which could have him sitting out for a few months (FUCK), I thought Camo should enjoy a little limelight. I mean they say positive energy helps to heal whats ailing ya', so Camo I'm gonna focus all of my white light towards you homie. 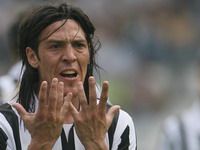 I've said this time and time again, with Camoranesi in our line-up you'd have to be dumb, deaf, and blind to ignore how different a side Juventus becomes. No one in Serie A, or anywhere else as a matter of fact, has touch or hair like this gringo. He gets controls of the ball no matter how retarded the pass. He looks up, mind-fucks a few defenders, and then does something positive almost every single fucking time. He was the connection between our midfield and attack that was sorely missed against Atalanta, Empoli and Milan. Get well soon Mauro. We need you. Hell, I need you. I'm a mess without you. I miss you so damn much. I miss being with you, I miss being near you. I miss your laugh. I miss your scent; I miss your musk. When this all gets sorted out, I think you and me should get an apartment together.

Ya that just happened. Enough said.

On to the Coppa Italia. I was genuinely excited for this one, really I was. Not because the Italian Cup is our Champions League this year (hardly), but because of the individual showcasing appeal this match had. For starters, I thought Ranieri had a brilliant pre-game approach to this one. He put his money where his mouth was and publicly offered a platform for the unpopular Tiago and Almiron to showcase their talents and prove their cases for a deserved crack at the starting eleven. At the same time, many eyes would also be on our Empoli-loaned Juventus-owned starlet Sebastian Giovinco as he had his very own case to argue as well.

Right from the opening whistle it seemed Empoli just wanted to win more than we did (aren't we used to hearing Juve's name in sentences like that?). Giovinco (who will most certainly get the call up in June) was the driving force behind most of their attack which seemed to blanket any attempt Juventus made at responding. With a cutting run into our final third, Giovinco nicely set up Luca Antonini who then crossed for Nicola Pozzi to put Empoli ahead 1-0 on the 20th minute. Things went from bad to worse for Juve. Neither Tiago or Almiron seemed able to produce any sort of cohesive output, aside from fouls. All the while, to Malesani's credit, Empoli continued on their way to their second goal of the match on a wonderful individual effort by Abate by the 51' min of the second half.

Ranieri tried to salvage something from this game by injecting a bit of life in the form of Nocerino, Molinaro and Iaquinta into the match. To our luck, in the 81st minute we were able to secure a very much needed away goal. One that should provide us with a fair chance of advancing if we're able to defeat Empoli on goal difference (home/away) at home come January 16. After a performance like this by both sides though that's a big IF. I feel as though I should mention the outstanding efforts of Iaquinta so far this season. Not just because he might have saved our Italian Cup efforts, but he's been taking advantage of every opportunity he's been given and in return he's enjoying his best start in Serie A with Juventus notching 6 goals in 11 appearances in primarily a substitute role. No doubt he deserves to start in attack alongside T-Rez in more than just a few matches this seaon. A sentiment Ranieri will probably continue to keep on ice for the likes of Tiago and Almiron.

I guess it wasn't all a houseleague affair this month, the game against Milan on the 1st of December did have its bright spots for Juventus I must admit. We certainly kept them on their back foot throughout the match even without Camo's services. Really, too many standouts to name. End to end stuff with brilliant saves by both Buffon and Dida ( I know it's weird to hear Dida and Buffon in the same breath). However, I'll have to leave this match's recap short with some 'kind of'-highlights before my bitterness for this draw incapacitates my ability to form coherent sentences. Enjoy the highlights you grubby bastards!