The Boys Are Back In Town; Juventus 1-Inter 1

Share All sharing options for: The Boys Are Back In Town; Juventus 1-Inter 1 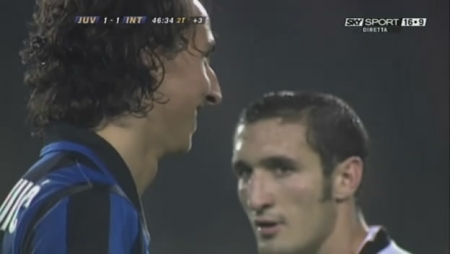 La Vecchia Signora's fine silverware was on display Sunday as we hosted that 'other team' from Milan. That 'other team' who for once, came into the derby as the odds on favorite to win. Throughout its entirety however, neither team came forward as the clear cut winner, or loser for that matter. A result, however tough to swallow, was deserving of both squad's performance. Performances that included end-to-end posessions, dizzying midfield runs, calculated defensive stops, and a dastardly bone-shaking challenge from our boy Chiellini. Yup this game had it all. You might say it was Juventus' best game yet, I might say it was refreshing taste for Serie A football and some degenerate drunk in the corner of some sports bar might have thought the game lacked a bit of sheen. Oh, but there was sheen my dear friends, bus loads of it.

A tough game no matter which way you looked at it, especially when you rememeber the Old Lady just turned 110 last week (talk about a MILF). Either way, you knew Inter would put together some fantastic spells of football but you hoped Juventus' was ready for them with their own bit of sorcery. You knew the crowd at the Olimpico was going balls-out win or lose, so the atmosphere was guaranteed. The only real variable was whether it would be flood-gate like goal scoring affair, or a low-scoring tactical clash of titillating tactitionaries. Let's go right to the highlights for that one shall we?.

Truly, a well played match by Juventus. No complaints here. So without further ado I thought we'd do something a little different from last week's Wanted Dead or Alive styled theme (boy did I ruffle a few feathers lol.... it's ok guys you can thank me later). This week though I thought we should try a report card theme. You know the ones we all used to replicate and change the grades before we gave them to our parents... right? anyone? Ooops that was only my friend Andy (haha sorry Andy). So anyways, here we go and we'll start up through the back (a little foreshadowing of how Juventus will handle next week's fixture... and coincedently, just how Parma likes it. Ooops there I go again).

Buffon- Made three absolutely critical saves week. One on our ex-Ibra and two others Suazo. Great game as usual. This man is the back bone of the team and should wear the captains ban full-time. He is the definition of consistency and a source for a lot of Juventus' on field encouragement. Thank the Lord he plays for us. He gets an A+ for keeping us in the game long enough to tie things up.

Molinaro- Not a bad game but not his best. That said he was still effective at times with some one touch passes alongside Nedved on the left. He didn't make any of those long stringy runs up field but then again his job was always going to be more defensive against Inter's offense. He gets a B for not doing anything substantially good or bad.

Chiellini- What a game. Lets put that forearm against Ibra aside for a minute because for 85+ mins he played his ass off against arguably Serie A's biggest threat (aside from Trez). He was quick and very active in snubbing all of Inter's attempts on goal. Great positioning on almost every ball Inter threw in his direction. This is how you want your central defenders to play. Controlled agression people, however, it comes with age... trust me i'm still battling with it at 23 too. Ok, about that stupid tackle. It was a miracle Ibra got back up after that clash, really it was. However, if you've ever defended against a bigger-than-yourself striker, like an Ibra (ya I know they're arent many like him) I'm not saying you play a little dirty, but just like baseball pitchers throw at batter's heads, Chiellini wanted to send a message. Problem was Chiellini should have realised that Ibra had already surrendered. Oh well so sad. Remarkable stuff that Chiellini, che palle! He get's an A.

Chiellini vs. Ibrahimovic- Bad Blood??-great soundtrack, turn it up!

Lego- This guy has really found his own and is starting to improve with every game. He made several important and well-timed step-ups in defense. For all you non-footballers out there... A 'defensive step-up' is where your defender reads an opposing players pass, then 'steps up' around his marker and intercepts it. You got that kids? Go outside and practice with a friend. Another great aspect about his game this week was how well he has been able to keep our back line organized. I counted 18 offside calls on Inter. Remarkable, simply remarkable. It was wonderful to see every defender on the same page and playing like a unit given our recent injuries. It will certainly be interesting to see what transfers we make this January if our back-line continues to play like they did against Inter. Time will tell but Lego gets an A-.

Grygera- Not a bad game either. He played a solid game in defense, and was used only in simple one-touch passing plays as a form of support to Palladino. He did however forget to come back a few times as Cesar was completely left alone with space to run. We got lucky that Inter didn't take advantage of it. But Grygera still held his own and is also gaining more confidence with every game gone by. It'll be interesting to see whether Zebina will reclaim his starting role or if Grygera can crack the starting 11 for good. Time will tell again, but for now Grygera get a B.

Zebina- Glad to see he's back... handing! Get it, back-hands, suspension... No? alright fine. He doesn't get a grade really since he only came in for Grygera towards the 90th min. NGR No Grade Returned.

Nedved- The beautiful bastard. I thought the Czech had a good game. He was active in the midfield from the start and was his energizer bunny-self up and down the pitch. He had a nice play in the first half where he chested down a ball, then turned Maicon inside out before he mis-hit his attempt on goal. The Czech let a few go from distance, but didn't hit the net. Now some might say he wasted chances, but not I. The Nedved I know can easily strike a fucking screamer into the corner. I say, take all the shots you want Nedved, sooner or later he'll put one in. The Blonde Bomber gets a B.

Zanetti- Facing his old club with which he played for 13 seasons, he looked like a man posessed. Despite his old age, Zanetti was instrumental in Juventus' midfield efforts. Zanetti hustled, hustled, and hustled some more as he did well to close down space on Inter throughout the match. He didnt net a goal, nor make any brilliant passes, but Zanetti gets an A here for his understated efforts. Thats my boy Blue! Thats my boy!

Nocerino- Officially Gattuso's heir. What's worse for opponents is that Nocerino has barrels full of offensive ability. He might very well one day turn into a leader for Juventus on the pitch. However he's again very young and at times can't control his agression, but he played a heck of a game closing down space on Inter's men all over the field with Zanetti. Tiago has his work cut out for him. Nocerino gets a B+.

Palladino- Started the game on the right, then played left, then played a bit more right, then came back to the right. This kid (again, wow, we have young guys eh?) played his heart out simple as that. He did well to play the wing and supplied numerous crosses. I'm kind of hoping he can run a bit more at defenders though. I think he has the pace to do it too, plus he showed us this game he can use his left to boot. As he gets more comfortable with this position I think he'll turn it up. He still gets an A with room to improve.

Del Piero- I'm not gonna lie, he didn't play well at all. Now understand Sofia I'm holding him to his own very high standards. Apart from two good passes out wide to Grygera, and one free kick, he was more effective tripping and tackling the opposing team all over the field. Granted you got to give the man props for coming back to defend, but anyone better do the same when games aren't going exactly how you wanted them to. All things considered, he made Ranieri's job much easier for him when he looked to find a sub. But I won't be hard him, it just wasn't his day. His heart was in the right place, just not his feet. He gets a C+ (...sofia thats the best i can do really).

Trezegol- Really a non-factor in this one. No one really can blame him. Unlike Alex, Trez is a pure strikers strikers. He's a one-touch goal kind of player. He doesn't have the ability to create alla Totti, but we also love him for the same reasons. He skill set didn't exactly lend themselves to this one only because of this game's midfield chess-match. As well, he was defended nicely by Samuel who made his day that much harder. He gets a C just to be fair.

Iaquinta- As always, tons of hustle and passion. He'll get his fair share of playing time soon. NGR No Grade Returned.

Ranieri- Well done sir, well done. You have to like what this guy's doing with our team so far. These past couple of performances have shown a fit, determined, agressive and very very cohesive Juventus. Even DD can't hate on that (although he has all the right too). Ranieri has loads of experience from all of the top leagues around the globe, and has used the opportunity to basically start with a blank template (roughly) to implement a strong work-ethic and instil a never-surrender attitude with the players (who all seem to respect him for it). So far so good wouldn't you say? In this game Ranieri wisely chose a four man midfield. I, like Ranieri, believed a three man approach to Inter's highly skilled middlemen would just be too little a task force to employ his own pressure-like system. Good wing-play approach with Palladino, and great timely substitutions. Well done Ranieri, keep listening to me and your going places. He gets an A. 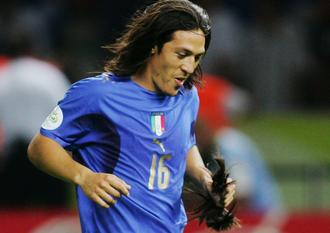 Remarkable really. Camo gets his first taste of playing time after an injury that kept him sidelined for a few months, and scores the equaliser. You just knew though that he'd be involved if Juventus scored some way or another after you saw the quality of his first few touches. In only 10 minutes, he managed to convince Cambiasso to change his citizenship after the Italian World Cup Champ weaved menacingly around the Inter midfield and defense. Camoranesi's display last Sunday begs the question: Where does his unique ability come from?... Perhaps through his unique heritage?...Not quite... Perhaps by his supple baby calf-skin lined boots?...Maybe... Or, could it come from his gracefully flowing Samson-like locks... Of course. Camo gets an A.

Thin Lizzy said it best: The Boys Are Back In Town Baby!!!

Quick shout out goes to Marco for that great pic of Chiellini vs. Ibra