Share All sharing options for: A Short Essay: Sportsmanship, Emphasis On Sports & Man 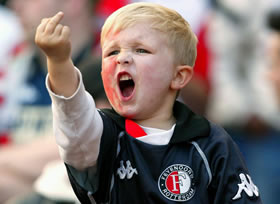 Another game, some more terrible refereeing. Another unnecessary loss of life, another hurdle for Serie A. What a mess. So, what can we learn from this week's lesson in Italian Calcio? Well, it's been a tough week to swallow that's for sure. Speaking of mess, each of us die hards have at some point this past week i'm sure, resorted to our old familiar vices to cope. In my own form of soul-searching and mental-probing to find an answer to that question, I inevitably turned to the only thing in my life I knew I could count on for some truth and direction. No, not Chuck Norris. The source of joy that started it all for some of us. The Soccer Ball.

Man... after last weeks game against Parma I broke down. Literally fucking F-L-I-P-P-E-D. I didn't pick up the phone, didn't leave my house, practically starved myself, and ignored my girlfriend (nothing new there lol -- sorry baby, take me back). Watching the same highlights over and over in my dimly lit room. First, the foul on Zanetti's tackle, I broke my t.v. remote clean in half. Second, Iaquinta's overturned winner had me so fucking enraged I convinced myself that choking the mailman would be the only solution to end my torment. Yeah... I was fucked up. So there I stayed, wallowing in my own filth, wearing the same crusty ol' robe for three days straight, battling with the unforvigable comments left on this blog, pondering the life of a Juventino as I knew it, wondering when the pain would stop. You see my friends, before Parma, before Gabriele's untimly passing, there was still the fresh memory of Calciopoli, Pessotto's attempted suicide and the horrific trajedies of Alessio Ferramosca and Riccardo Neri lingering in my mind. I was ready to give it all up.

On the forth day wondering what the meaning of all this mess was, I found myself aimlessly gazing through time and space, thinking of (you guessed it) nothing. Something I thoroughly enjoy passing time with. However, I regained conciousness (20 mins later), and to my suprise, I had been unknowingly staring directly at a soccer ball all the while. "Weird no?" I said to myself. There I was, as Pink Floyd filled the background, drifting in and out of the black hole in my mind, tired of hypothesizing and contemplating when all along, the answer to my question was staring directly back at me. As it laid ever so gently in the corner of my room, I was captivated by its meaning. A beauty unlike any other. A source of agony unimaginable.

How could something so simple as a ball be the source of so much pain, agony, and hatered in the same way it provides so much joy, energy, love, and unity? Even for me, playing competitive football ever since I can remember, that question wasn't as easy to answer as I thought it would be. As a youth brought up playing the game, I've certainly enjoyed the highs of hard-fought victories and the lows of crushing defeats. Yet, all of my emotions it seemed, stemmed from the exhilaration of competition. Thoughts of "winning is all that matters", and "victory at any cost" looped over and over and over. But at what price?

Last Sunday, a young man paid that price with his life. It seems that somewhere along the line we have all forgotten something very important. That something is called sportsmanship. Whether we like it or not, sportsmanship in sports is a direct reflection of our own ethics in real life. Sportsmanship like ethics concerns both our character and our actions. The image you project is a product of your character. Good sportsmanship is not just what you do on the field, it is hopefully the way you conduct your life both on and off the field. That said, looking back on Sunday's trajedy, I'm no less guilty than any one of those members involved in the heated argument that influenced Gabriele Sandri's death, like it or not, neither are you. As a result, I've also come to regret all of my negative comments recently made towards Napoli, Palermo, Inter, and their people. For that I offer them my apology. Sportsmanship is perhaps the hardest and most important thing we can learn from sports. We should all do our part to give back to the sport as much love as it has shown all of us in the past. As Juventinis, lets focus on the tasks ahead and forget the past. Lead by example, play fair and let's forget about certain outside forces. Play the beautiful game the way it was meant... the rest will always take care of itself.