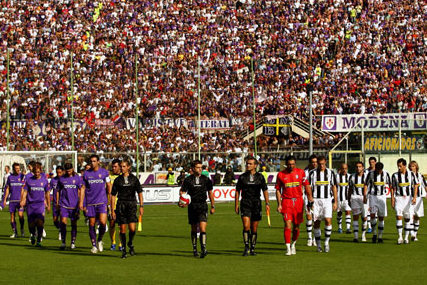 To say both sides were playing for a tie would be gross propaganda. To say that our defensive unit played sloppy and lacked organization would be a horrid miscalculation. To say that our midfield was absent of fluidity and possession would be erroneous on both counts. However, to say that we deserved a draw infront of 40,000 screaming Viola fans you'd actually be closer to the truth... Here's why...

From the start of this one both teams struggled to find their rythme as quick bouts of possession went back and forth for a few minutes. Failed long-balls, tackles, and timed runs lasted until Mutu's volley from distance just skimmed the top-netting around the 14'. That seemed to wake up both teams as the level of play rised nicely. Juventus' back line was impressive early as it seemed they were well organized at snubbing Viola's attempts at goal. Mutu was certainly charged for this game as he was consistently the thorn in Juve's defensive side throughout the match. However, a bright spot half-way into the first period for Juve was Almiron's play. His close distance dribbles and well timed and placed passes certainly made his mark in the midfield. 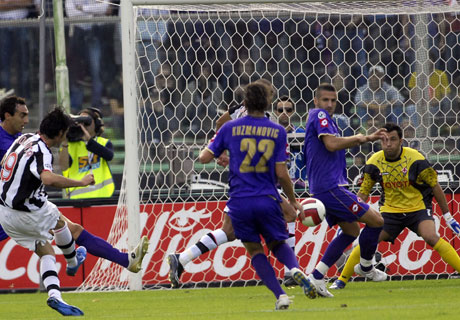 The last 25' min of play in the first half saw Iaquinta net the match's first goal. On what looked reminiscent of an error in Torino's defense last week that sprung Trez's goal, Iaquinta calmly slotted his into the bottom right corner. In almost a sereal experience, the lack of Bianconeri supporters made this goal somewhat hard to believe. Normally a frightening cheer would ensue a Juve goal, thus triggering my reaction. However, reality set in as Juventus took the lead in Firenze 0-1. Almiron continued to make his mark on the match as he even tested Buffon with a deflection off of a Viola shot on goal. Buffon (again) showed why he's the world's best keeper as his falling, one-legged save was a thing of beauty. The remaining minutes of the first half were marked by a classic screaming left-footer from Nedved that was well met by Frey. As well as a few more well-timed defensive stands amidst Fiorentina's well designed attempts.

The whistle blew for the start of the second half as Juventus' line-up remained unchanged. Shortly thereafter, it was Frey's turn for a nice kick save this time on Trez's attempt on goal. Almiron again played impressive, as did Molinaro who's by-line runs were beginning to conjure fond memories of Zambrotta's left flanked ventures. Viola then turned to the likes of the off-again on-again Vieri, who seemed more content touching and frolicking with Chellini... something men wearing purple often do. Around the 65' min, Nedved was in all alone against Frey, and was certain to cap off his great efforts second half but the beautiful bastard failed. No doubt the reason Ranieri substituted him for Palladino, as he decided to pass to Trez last second instead of putting Juve ahead 0-2. A substitution that although to some seemed irrational, the veteran Czech must have known better and deserved to be sent to ride the bench. 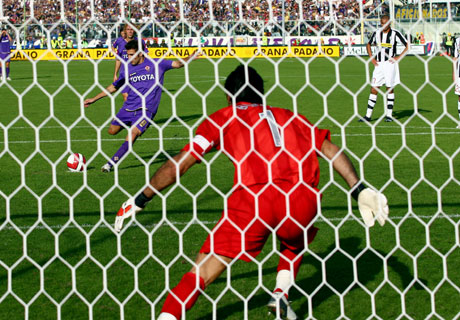 The last 25' min was some what of a let down for Juve fans. Iaquinta who had played a fine game was substituted for the ex-Azzurri Del Piero. A substitution that immediately caused me to throw my shit at the television screen. I mean this fucking guy smelled worse than my dog's balls. Poor passing, poor vision, poor ability all-around. A few more games like these and ADP won't only have to worry about his hair thinning. Apart from that, the game was still fast-paced and occasionally enjoyable with back and forth possession this time with Fiorentina controlling most of it. Then disaster struck around the 87'. Hand-ball, Legrottaglie, in the box, shoot your mother, penalty kick for Fiorentina. The ex-Chelsea, ex-Juve, ex-8 ball junkie made no mistake as his effort cleared a stretched-out sprawling Buffon.

All in all, Juventus played a good game against a solid team with good instances and bad. Unfortunately, for the Juventini faithful we didn't come away with three points. But Juve fans with hernias, kidney stones, and high-blood pressure all around the globe know its par for the course in our chase for lo Scudetto this year. Happy Thanksgiving & Enjoy the Highlights!! (as much as you can)

CAMORANESI COME BACK SOON! WE NEED YOU! HELL I NEED YOU!