Trez Secures Three For Juventus, One Point Behind First Place

Share All sharing options for: Trez Secures Three For Juventus, One Point Behind First Place 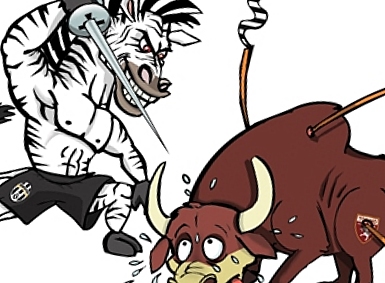 As another week in Serie A rolls on, and the ever-present pessimistic, cynical, pathetic, feeble, and outright idiotic comments are being made following yet another* Juventus victory, I just can't seem to wipe off this incredibly emphatic grin on my fat face. Sure Trez was offside, sure Trez has a horse shoe up his ass, sure Nedved drinks the blood of young boys as the source for his magnificently-glowing radiant locks of hair. Believe what you will, the fact remains that Juventus is now only one point off the lead after a hotly contested derby in Turin last Sunday.

Go ahead, suck in air everyone... Do you know what that smells like? It's the unmistakable sent of flares and tear gas.... Ahhhh it truly does bring tears to your eyes even if you're not a bianconeri faithful. Even before the start of the Derby della Mole, rival ultra firms from Torino and Juventus got the party going early outside the Stadio Olimpico. Can we really blame em?... I mean it's really not an official derby unless at least a few ultras are sent to jail right?... That being said, there certainly was no love lost between firms last Sunday despite the derby's four year absence. Now although I would have like to see my Drughi kick some Granata ass, the clash looked like a stalemate between firms, much like the way things mostly went inside the stadium.

No doubt as a result, that energy spilled onto the pitch as more than a few yellows were handed out. When Juventus and Torino weren't busy commiting fouls or losing possession, both teams enjoyed painstaking opportunities to score on each others final third. Ranieri, employing another 4-3-3 formation, was left with unenviable task putting together a strong defensive unit. With Grygera, Legrottagllie, Chiellini and Molinaro's efforts being called into question again, one cannot reasonably assume Buffon can continuously bail them out against better clubs. As our defense remains our top transfer priority.In any case, unlike other mid-table deserving teams* (Asterisk self-explanatory) that can't seal victories, La Juventus solidified three points from Torino as this championship team continues to stay stride-for-stride with Inter.

Fratelli Bianconeri, I must confess though I did not watch the match... I was force-feeding my bull-dog Gattuso. You see, I'd like to have him take a tremendously nasty shit all over my neighbour's lawn, who is in fact a Viola fan ahead of next week's clash. Henceforth, my poorly detailed recap. However for a more conclusive effort on the match against Torino, the lovely Martha here at The Offside provides an equally as lovely recap. Instead, being the mindless drone to television and all-things-lazy, I bring to you the video highlights. Enjoy Ragazzi Juventini.