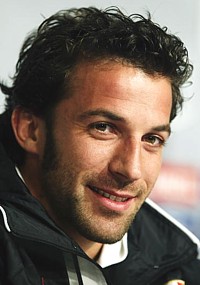 The Official Juventus website is reporting that Alessandro Del Piero has renewed his contract with his club for the next three years. Details are still pretty slim since I've only read about this update within the last five minutes but certainly more news will be available to us as the story gains some traction.

The exact terms of the contract include a gradual 20-25% salary deduction as 'Il Pinturicchio' gracefully approaches his last two seasons. However, the catalyst or "deal maker" if you will, was an incentive-like image rights agreement whereby Juventus' all-time leading scorer stands to make-up that pay cut and perhaps a lot more. It's unclear who's brainchild this feature belonged too...

Perhaps it was Alessandro's brother/agent Stefano, however one can only assume his level of stupidity was more than sufficiently groomed by his brother's ability to fund any endeavor Stefano wished... But who am I to point to judge, I'd probably be as dumb as a rock even if my brother was half as successful as ADP.

On the other hand this contractual component might very well have proven some signs of life within our management. To think... all this time and those beautiful bastards Secco, Blanc, & Gigli actually might know what they're talking about. I mean this contract makes sense for everyone. Check it out:

I'm no economist here but thats a pretty clear WIN WIN WIN (if you count the French in too haha).